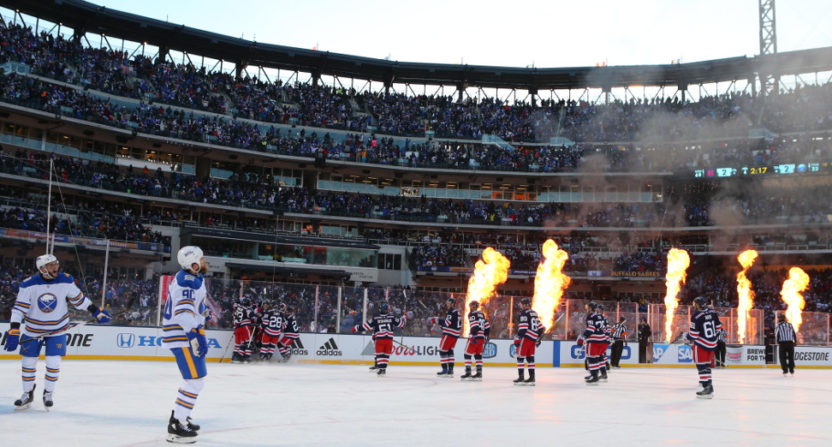 Depending on what you use for comparison, ratings talk can have more “That’s bad”/”That’s good”/”That’s bad” moments than a discussion of cursed frogurt. The latest case in point comes from the 2018 NHL Winter Classic Monday between the New York Rangers and the Buffalo Sabres, which produced a 1.42 household rating and a total audience of 2.48 million viewers for NBC. Both of those stack up as the lowest for a Winter Classic (you can find a full list of Winter Classic ratings here), and they’re apparently also even behind two of the Stadium Series (outdoor, non-New Year’s Day, non-Heritage Classic, non-Centennial Classic) games.

But NBC’s tweets on this instead played up how the ratings are much better than their typical regular-season indoor broadcasts:

The 2018 NHL Winter Classic on NBC featuring the Rangers and Sabres ranks as the 12th most-watched NHL regular-season game on record – all 12 have been outdoor games on NBC. pic.twitter.com/jPKj4YJMKL

All of this is true; this is the lowest-rated Winter Classic on record (even considering that it’s using Total Audience metrics that include streaming), it is the fourth-straight year of declining Winter Classic viewership, but it is still much better than a typical regular-season broadcast and even some other outdoor games. (Such as last year’s Jan. 1 Centennial Classic, which featured only one American team and drew a 0.64/1.077 million viewers; the Jan. 2 Winter Classic did better with a 1.5/2.56 million.) And it’s also better than any other network’s NHL regular-season coverage did in the pre-NBC days, and better than anything on NBCSN has done.

And both of those perspectives have some merit. The Winter Classic ratings are continuing to decline (the matchup/location here may not have helped, as it’s hard to see many outside the state of New York overly interested in the Rangers and Sabres playing at the Mets’ ballpark, and there was also competition from some solid bowl games, but none of that is a total reason for this), and outdoor NHL hockey is perhaps no longer the novelty it was at first, but these ratings are still much better than NBC gets for any other regular-season coverage, and there’s reason to think their 2018 Winter Classic matchup and location (the Boston Bruins and Chicago Blackhawks at Notre Dame Stadium) may be an improvement.

It’s not necessarily “Cancel the Winter Classic!” time. These ratings aren’t terrible overall, and it’s hard to imagine NBC doing better against the Jan. 1 bowls with anything else they have. The game also has some value in terms of the shoulder programming it creates (including the Road To The Winter Classic, which was on NBCSN this year), and it has some value to the league in terms of ticket sales and merchandise. And if NBC and the NHL are getting more out of it than they’re putting in, there’s no reason why they shouldn’t keep running it, even if the ratings never return to what they once were. And these broadcasts still do very well against every other regular-season hockey broadcast.

For the moment, it’s still good by the standards of NBC hockey broadcasts. But that doesn’t negate discussion of how this is the least-watched Winter Classic in history, even if NBC would prefer to focus on how it stacks up to their other NHL programming.