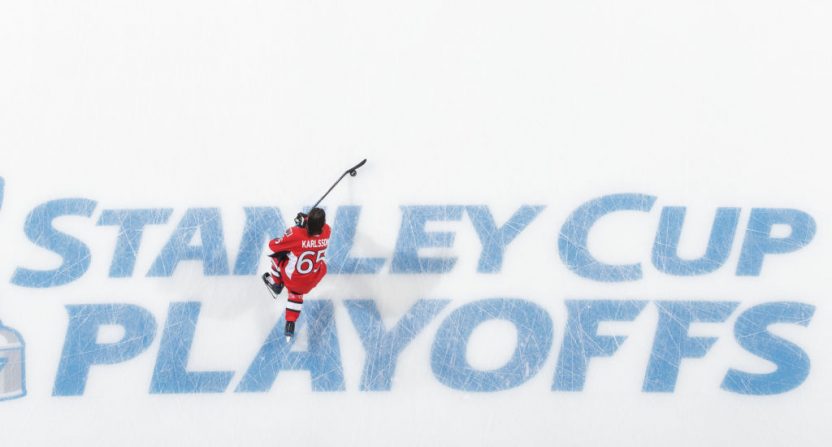 In what will truly mark the end of an era, next season the NHL will no longer have a presence on NBC.

That’s according to John Ourand and Mark J. Burns at Sports Business Journal, who reported today that NBC Sports had pulled out of bidding for the remaining NHL package. Disney and ESPN had already secured rights in a seven-year deal that included rights to four Stanley Cup Finals, but until very recently NBC still seemed like a contender to re-up in some form.

Not now, with Ourand and Burns noting that they never really made it a priority, and indeed may have only stayed in as a gesture to the league to help drive up the cost for rival networks.

NBC has officially pulled out of the bidding for the NHL’s second TV package, according to U.S. and Canadian sources. Next season will now mark the first time since the ’05-06 campaign that the network will not carry any NHL games. NBC would not comment on this story. Several weeks ago, the network put forth a bid for the league’s second package that would have put most games on its Peacock streaming service.

The bid came in below $100M, which was well below the figure that the NHL sought. NBC is in the last year of a 10-year deal that pays an average of $200M per year. Last month, ESPN signed a seven-year deal worth around $400M per year.

NBC showed loyalty to NHL by staying in the bidding process and helping the league try to secure bigger rights deals from others, but NBC never was aggressive in pursuing a renewal.

As for which network will pick up the remaining NHL package, Ourand followed up the NBC report by tweeting that Turner Sports was the favorite:

Source: Turner Sports is likely to pick up the rest of the NHL’s media rights package. https://t.co/9qB4KwehC8

Turner is an interesting fit for the NHL. TNT, of course, has two nights per week of NBA programming during similar months of the calendar, along with AEW programming. Adding hockey to the mix indicates sports is very, very much central to their programming strategy going forward, especially as they apparently won’t be partnering with CBS.

Here is one note component of potential Turner/NHL deal:

HBO Max getting into sports for first time.

It’s possible or even likely that TNT ends up building a feature night of hockey, similar to their winning approach with the NBA. In any case, though, starting next season NHL coverage is going to look very different than it has for the last fifteen years. Familiar in the case of ESPN and new in the case of Turner, but NBC leaving the sport is certainly going to be a change.