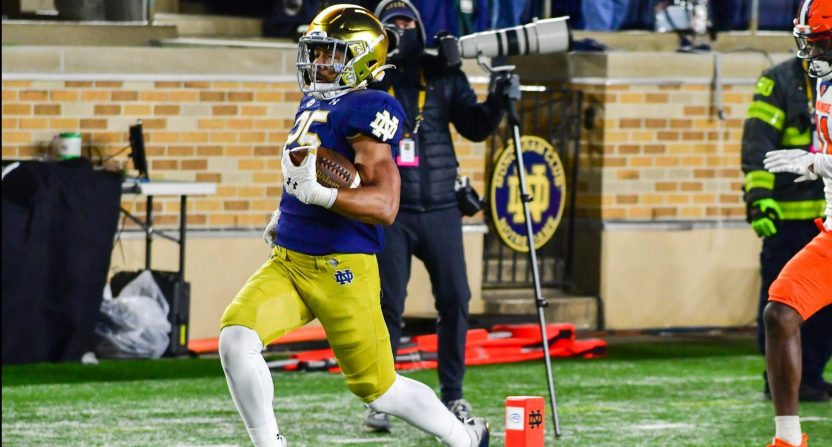 This is the first time the streaming service will have exclusive coverage; the remainder of Notre Dame’s home games will air on network NBC with a Peacock simulcast. The game will also mark the broadcast debut of new NBC analyst Drew Brees.

From the press release:

“Dating back to airing Sunday football replays with Lindsey Nelson, we have always strived for innovation in the media space – our partnership with NBC and Peacock only solidifies that mission,” said Notre Dame vice president and James E. Rohr Director of Athletics Jack Swarbrick. “Bringing Notre Dame Football to Peacock is just the next step in the evolution of our relationship.”

“We are delighted to stream Notre Dame Football on Peacock,” said Pete Bevacqua, Chairman, NBC Sports. “Peacock exemplifies how we’re innovating as a company, and Notre Dame has consistently been a tremendous partner in making progressive choices for sports programming.”

NBC Universal clearly has big plans for Peacock, especially with the impending shuttering of NBC Sports Network, which had previously broadcast a couple of Notre Dame games. Usually, though, these games are on the network, and while everyone can understand a company wanting to give subscription numbers a jolt with exclusive content, taking a game that would ordinarily be literally free to watch with an antenna and putting it behind a paywall is always a fairly shameless choice. It’s pretty obvious that’s what’s happening, even if the release hadn’t included this section:

Prior to the Notre Dame-Toledo game, Peacock will offer fans a limited time offer to save on Peacock Premium during football season — details will become available at www.peacocktv.com/notredame on Wednesday, August 11.

Fairly transparent what’s happening here. And hey, that’s NBC’s right! They have a lot invested in Peacock, and the entire thing depends on paying subscribers. But that doesn’t mean we have to like it.

It’s not a marquee matchup (no offense to Toledo or the MAC in general) so there probably won’t be much outcry. It also serves as a bit of a soft landing for Brees, who will call the game alongside Mike Tirico in front of a smaller audience rather than having his first ever broadcast be on a national network.