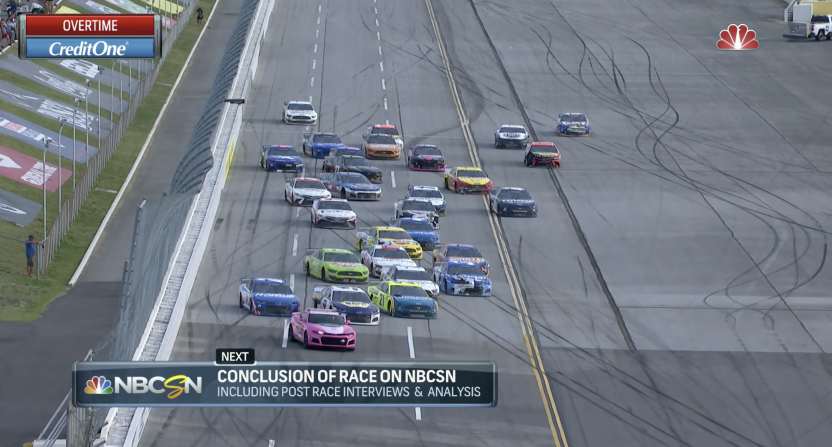 There was controversy at the end of Sunday’s NASCAR race at Talladega. While most of the controversy centered around who was or wasn’t penalized for passing below the yellow line at the finish, some controversy was reserved for NBC for moving that finish to NBCSN in favor of local news and NBC Nightly News.

NBC moving the race may have been an unpopular decision among fans but it wasn’t for a lack of trying on NBC’s part to get the race aired in its entirety on NBC. An NBC Sports spokesperson told Awful Announcing, “After four hours of NASCAR coverage on NBC, a red flag shortly after 6 p.m. ET forced us to shift the conclusion of the race to NBCSN, a network race fans know well, in order to honor other programming commitments.”

NBC made the best decision they could under the circumstances. Don’t get me wrong, as a NASCAR fan who was DVR’ing the race, I didn’t like the decision either. But after studying what took place and the situation NBC faced, I understood where NBC was coming from.

In an ideal situation, NBC would’ve stayed with the race. This is purely my speculation but two things happened that forced NBC’s hand to move the race in favor of the news.

First, this was a way busier news weekend than most with President Donald Trump revealing he has COVID-19 and being admitted to Walter Reed Medical Center all in a single weekend. That kind of rapid development on one of the biggest news stories in years, it’s tough to justify keeping local news on the sidelines for anything but maybe the NFL or a championship final. ABC had made a similar decision, moving the end of Friday’s Marlins-Cubs game was to ESPN for ABC to update viewers on President Trump being transported to Walter Reed.

That being said, NBC tried to push local news back as much as they could to get the finish of the race on NBC, leading to my second point. The switchover happened at approximately 6:05 p.m. ET, when the conclusion of the first overtime period resulted in a red flag. The red flag was another wrinkle that didn’t help the chances of keeping the race on NBC. If cars are moving around, even under caution, things are still happening and even people tuning into the news would understand that the race is running long and once it’s over, they’ll go to the news.

What news viewers saw on Sunday was a bunch of cars stopped on the track and no one knew how long the red flag would last. And when those working at an NBC affiliate are seeing cars not moving on the race track, that’s tougher to justify keeping local news and NBC Nightly News off the air for that. The red flag wound up lasting about 10 minutes but because there was a third overtime, the race ended approximately a half hour after the switchover and would’ve all but kept local and national news off the air. Depending on how long the red flag was going to take, the race could’ve potentially run into Football Night in America. That might not matter to diehard NASCAR fans who spent their day watching a race and then potentially not being able to watch the end, but to an impartial group looking for the path of least resistance, they made the decision that would result in making the fewest people upset.

If there was a silver lining to the race moving to NBCSN, it was that they were able to have full postrace coverage. When the Daytona road course race ran long, NBC showed the entire race but needed to immediately leave after the finish to show the Stanley Cup Playoffs on both NBC and NBCSN. Some NASCAR fans were upset there wasn’t postrace coverage considering Chase Elliott won and Bubba Wallace lost a top 10 finish under unknown circumstances at that time. At least there was postrace coverage from Talladega.

No matter what NBC did, people were going to be upset their program was altered in some form. That’s the nature of the beast. Sporting events run long and when they run too long, tough decisions need to be made. The decision to make on-the-spot programming decisions like moving a live sporting event to another network involves input from many different sides who have their own agenda on what to do which most benefits them and their fans/viewers. One can look at NBC’s decision, still choose to not like that decision, and are totally fine to have that view. But it’s important to understand how a programming decision like that happens and that it’s more than a simple decision. A lot of times, the most pragmatic decision will be the one most taken by a network.