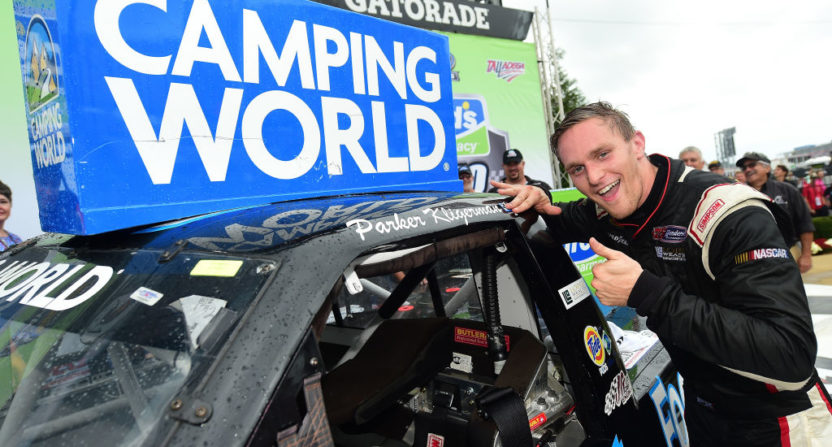 As NASCAR driver Parker Kligerman seeks a ride, he has been working with NBCSN on the network’s NASCAR broadcasts. Mainly doing pit reporting and studio work on NASCAR America, Kligerman is staying in the sport any way he can while driving for whoever is willing to put him in a race car.

In total, Kligerman has only competed in one Xfinity Series race (finishing 10th) and seven Camping World Truck Series races so far this season. This weekend at Talladega, Kligerman was one of the few who got through all the crashes and literally pushed his way to victory for the second time in his career (having also won at Talladega in 2012).

BIG CRASH! The No. 75 WINS at Talladega!

RT to congratulate Parker Kligerman on his @NASCAR_Trucks victory. https://t.co/a55YwJJxDR

Driving for journeyman truck owner Charlie Henderson, Kligerman was racing for one of the more underfunded and underdog teams in NASCAR. Henderson’s team doesn’t, and probably can’t afford to, travel to every race and has about a tenth of the team members and a far older truck chassis than the usual contenders. Kligerman has done well in the circumstances, with four top 10s in his six races this season.

But at Talladega, the engines have restrictor plates which lower speed for safety reasons. Restrictor plates provide a great equalizer and gives these small teams a chance to win if they get in the right position. That’s just what happened to Kligerman. Kligerman pushed trucks in front of him all race long and somehow didn’t wreck anyone. Many drivers were getting incredibly uncomfortable with Kligerman behind them because he would give their truck a bit of a bump, but that’s how you go faster at restrictor plate tracks. And with about 10 trucks left to compete for the win, Kligerman grabbed the win after just leading the final two laps, giving Henderson his first NASCAR win as an owner since his team won an Xfinity Series race in 1989.

Tomorrow, Kligerman will change out of his firesuit for a polo shirt and khakis as he reports on the Monster Energy NASCAR Cup Series race. But every so often, he gets to fuel his competitive juices, and sometimes that means taking home the trophy at the end of the day.

And hey, we at Awful Announcing always appreciate when the media person goes in and wins in their respective sport. So congrats to Parker.