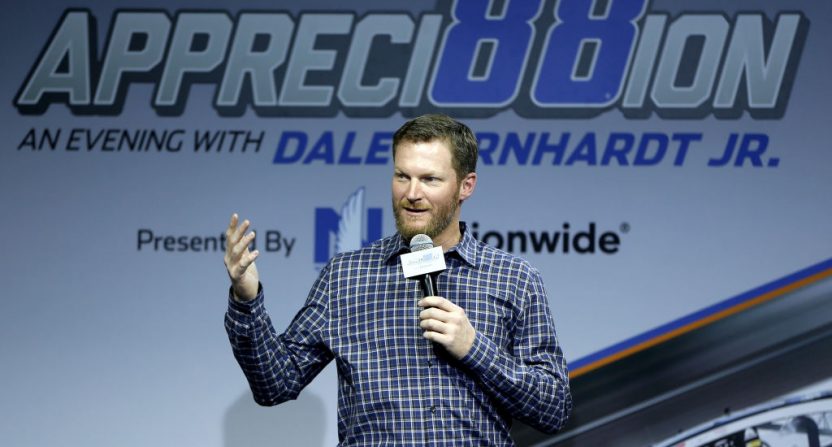 Dale Earnhardt Jr.’s work for NBC so far has usually been on their Monster Energy NASCAR Cup Series broadcasts, where he serves as an analyst. But the network has also found all sorts of other places to feature Earnhardt, from racing in the Xfinity Series for one night only to appearing on their broadcasts of the Super Bowl (the pre-game show), the Winter Olympics, the Stanley Cup playoffs (much to the chagrin of Keith Olbermann) and the Kentucky Derby. So it’s not particularly surprising that they’ll also be working him into their inaugural broadcast of the Indianapolis 500 on May 26 (they’re taking over those rights from ABC this year). Here’s more from NBC’s release on just what Earnhardt will be doing:

Earnhardt Jr. made 17 career appearances and registered five Top 10 finishes in NASCAR’s Brickyard 400 at Indianapolis Motor Speedway. He will serve as a roving reporter on race day, exploring the expansive scene that includes hundreds of thousands of spectators at Indianapolis Motor Speedway and contributing to NBC Sports’ pre-race, in-race, and post-race coverage alongside Wood. Earnhardt Jr. will also be featured on NBCSN’s Indy 500 coverage originating from Indianapolis Motor Speedway during race week.…“Dale Jr. is one of the most popular personalities in racing history, so adding Dale to our inaugural broadcast of the Greatest Spectacle in Racing on NBC was a no-brainer.” said Sam Flood, Executive Producer and President, Production, NBC Sports & NBCSN. “Dale has never been able to attend the 500, and now he will have the opportunity to experience every aspect of this massive event – from the party in the Snake Pit and the hundreds of thousands of fans in the grandstands, to the key strategic decisions and bold moves on track that will ultimately crown the 103rd Indy 500 champion.”“I can’t wait. This is an event I have wanted to attend for as long as I can remember,” said Earnhardt Jr. “To get this first Indy 500 experience in this capacity – as part of the broadcast team with NBC Sports – is a dream. That said, I fully understand the responsibility we have of bringing this race to television viewers across the country. There’s no better broadcast team to do it. I’m blessed to be a part of it.”

The release also revealed additional figures on NBC’s broadcast team, including the previously-announced Mike Tirico (host) and Danica Patrick (analyst for pre-race, in-race and post-race coverage), as well as the usual NBC IndyCar commentary team of Leigh Diffey (play-by-play), Townsend Bell (analyst) and Paul Tracy (analyst). The broadcast will also feature further contributions from NBC Motorsports host Krista Vota, reporters Rutledge Wood and Dillon Welch, pit reporters Marty Snider, Kelli Stavast, Kevin Lee and Jon Beekhuis, and insider Robin Miller.It’s interesting to see Earnhardt added to this group, as his racing experience comes in NASCAR rather than IndyCar. But considering the way NBC has used him on all their other sports properties, it’s not that surprising. And IndyCar racing is closer to NASCAR than, say, hockey or bobsled, so Earnhardt may have some insights to offer, especially considering his past at Indianapolis Motor Speedway. But this also speaks to NBC’s larger strategy of having the likes of Tirico and Earnhardt show up on all sorts of broadcasts, regardless of sport. We’ll see how Earnhardt does here and what he brings to the broadcast.[NBC Sports Group Pressbox]