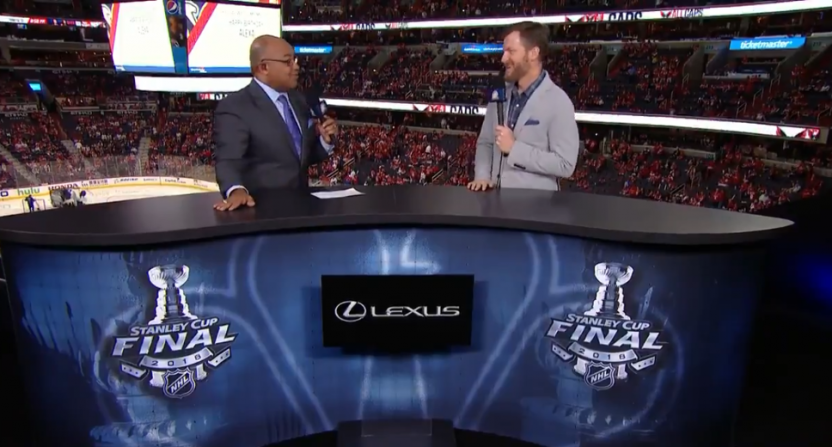 Networks love to promote their other sports franchises during marquee events, and the latest example of that saw NBC having new NASCAR broadcaster Dale Earnhardt Jr. do a couple of segments with Mike Tirico on their broadcast of Game 4 of the Stanley Cup Final Monday. But that didn’t sit well with ESPN’s Keith Olbermann. Olberman sent out some tweets criticizing Earnhardt, only to have Earnhardt and many of Earnhardt’s fans respond:

There is some kind of retired stock car or cab driver or something in the middle of NBC’s Stanley Cup Final pregame show. It’s not that NBC doesn’t take hockey seriously; it’s that it seems convinced it is necessary to make its hockey telecasts about other sports #WatchNHLNetwork

It’s not just that @NBCSports has trotted out Dale Earnhardt Jr in its #StanleyCup pregame AND at the start of its 1st intermission, it’s the institutional tone deafness indicated by the belief there is any overlap between these two sports with utterly different demographics. pic.twitter.com/UJxn7wLL5r

And here’s some of the response:

Kinda like when you got fired from covering sports and then started doing political commentary?

Having grown up in a racing community here in Canada, I can assure you there is an overlap between the two demographics.

…or maybe @DaleJr works for @NBCSports and they’re using their airtime to cross-promote? Also hockey is a kickass sport. So is racing.

There isn’t really a giant controversy here; Olbermann’s absolutely entitled to his thoughts on what makes for good and bad broadcasting (and he’s shared his hockey coverage opinions before, notably when defending George Stroumboulopoulos and bashing Don Cherry), and it’s interesting to have a sports media figure who actually comments on sports media, but Earnhardt and his fans are also welcome to respond (and particularly when it comes to lines like “cab driver,” and to the bizarre insistence that there’s no hockey-NASCAR crossover).

And yes, this is blatant cross-promotion from NBC, but all networks do that (including ESPN; let’s consider the Lightsaber Duel special for example, or any of the zillions of interviews with actors and musicians, including the all-time classic of Brent Musburger and Eminem). Now, that doesn’t mean that Olbermann approves of it when it’s his network, and he’s not the one making those decisions, but it’s also not like cross-promotion is unique to NBC, some sort of black mark on their coverage, or something that any network that had Stanley Cup Final rights wouldn’t do.

And these segments can be pretty entertaining at times. The 2007 Snoop Dogg interview on Hockey Night In Canada remains a high-water mark, and helped lead to him getting a NHL.com video series. And they work both ways, too; the NHL’s regularly promoted on NBC horse racing and Olympics broadcasts. And yes, there will be more NASCAR promotion with the NASCAR on NBC start in July fast-approaching (there have already been media invites sent out to watch Jeremy Roenick driving a stock car in Vegas Wednesday), but these kinds of moves aren’t only done by NBC, and they’re far from the worst thing in the world.

It should be noted that Earnhardt was much better prepared for this than, say, SNL’s Kenan Thompson (which, come on, man! You were Russ Tyler!), and that his segments actually were pretty smooth. Also, his analysis was probably more insightful than anything supposed hockey analysts Roenick or Mike Milbury would have said. You know, it might even boost NBC’s coverage grades to bring Earnhardt in full time relative to those two. Olbermann’s welcome to criticize here, but his opinions can also be criticized; there’s nothing wrong with this Twitter exchange on either end. (And ESPN, which recently expanded Olbermann’s role, is probably happy that he’s only involved in a hockey Twitter controversy instead of a political one.) But from this corner, Earnhardt has been far from the worst part of NBC’s Stanley Cup Final coverage so far.