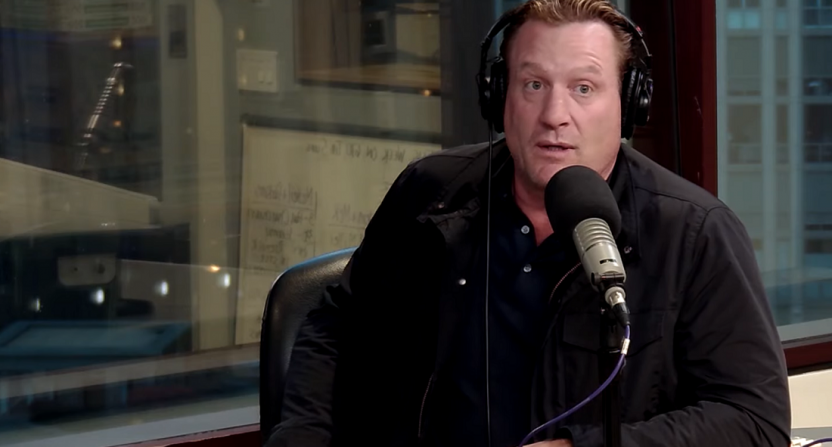 John Ourand of Sports Business Journal reported the suspension today, including this statement from NBC Sports:

In a statement emailed to Sports Business Journal Monday afternoon, NBC Sports said: “Jeremy Roenick has been suspended indefinitely without pay for making inappropriate comments about his co-workers. We will have no further comment at this time.”

The main comments in question were likely Roenick’s remarks about NBC Sports host Kathryn Tappen, where Roenick suggested he’d be open to sleeping with her:

During the podcast, Roenick described a summer vacation he took in Portugal with his wife and NBC Sports studio host Kathryn Tappen. He told a story of how at least one hotel guest approached Roenick to ask if the three were together. “I play it off like we’re all going to bed together every night, the three of us,” Roenick said. “If it really came to fruition, that would really be good. But it’s never going to happen.” Later during the same discussion, Roenick said that his wife and Tappen are close friends and he praised Tappen’s professionalism. “Kathryn Tappen is one of the most professional … sports personalities that I know. She is true blue one of my favorite people in the world.”

“He is so beautiful, I’d have to think about it if he asked me,” Roenick said. “I wouldn’t say no right away.” Roenick went on to describe Sharp as “one of the greatest, greatest guys on the planet” and “one of my best friends,” pointing out that the two had been teammates on the Flyers.

Openly speculating about possible encounters with coworkers is certainly worthy of a suspension, and now we’ll just have to see how long NBC Sports decides to keep him on the bench over it.