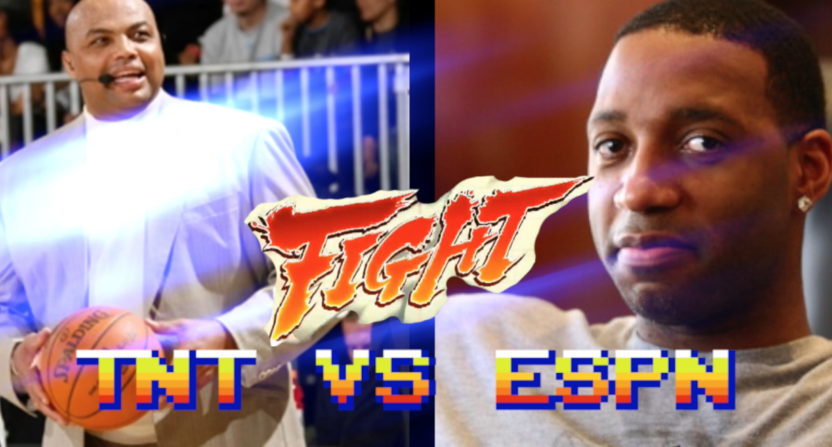 Here at Awful Announcing, we ask the truly important questions about sports media.

That’s why I have spent an embarrassing amount of time and brain-power answering an essential hypothetical: Who would win in a pickup basketball game between TNT’s NBA analysts and ESPN’s NBA analysts.

Before we get to the rules, let’s take a look at the rosters.

Let’s start by stating the obvious: If we’re talking about these guys in their primes, TNT wins in a landslide. Shaq, Chuck and KG are legends, as is Kevin McHale, and Reggie and Grant Hill were Hall of Fame-caliber players in their day. T-Mac, Chauncey and Jalen were great, but they don’t measure up to the TNT crew.

For this to be a remotely fair fight, we have to envision what would happen if these teams played today, in June 2017. With Barkley at 54 years old and Shaq in his current shape. Because the rosters are small and aging, we won’t make these old-timers play a full 48 minutes. Let’s call it a 24-minute game, running full-court.

OK, time to break it down.

TNT’s only true point guard is Kenny Smith, who is currently 52 years old and has not played in the NBA in 20 years. That’s going to be a problem. Reggie Miller is 51, though it’s easy to imagine he can still get buckets.

ESPN, on the other hand, can start Chauncey at the point and expect some solid output from the 40-year-old recent retiree. And Jalen looks pretty svelte at age 44, so he should be able to hold his own.

Chauncey is going to outplay Kenny, so if Jalen can keep up with Reggie, ESPN will be in good shape in the backcourt.

Kevin Garnett will be TNT’s single biggest weapon. The Big Ticket played in the NBA more recently than anyone else on the floor, and given his ability, instincts and intensity, he’s going to be a problem.

Who starts next to KG? Here TNT has an embarrassment of riches. TNT could play KG at the 5, C-Webb at the 4 and Grant Hill at the 3. Or they could go with Shaq at the 5 and slide KG to the 4. As long as they can convince Charles that he belongs on the bench (We’ll get to that soon), they’ll be stacked in the frontcourt.

As for ESPN, well… it’s ugly. T-Mac will take up one of the front court spots, and should be ESPN’s leading scorer. At 38, he’s one of the youngest players on either team, and he’s a Hall of Famer who appears to be in decent shape. He’ll be dangerous.

After McGrady, however, ESPN has just about no one. We’ll throw Tim Legler and Bruce here, by default, and hope for the best. Bowen may have been an all-NBA defender, but he won’t have an easy time guarding, um, Shaq.

Either Shaq or Chris Webber is coming off the bench for TNT, which is alone enough to swing this category.

Don’t sleep on 36-year-old Kara Lawson, who retired from the WNBA just last year. And maybe Rebecca Lobo, who hasn’t played professionally in a while but is only 43, could help out a bit as well.

Sill, TNT can call on Dennis Scott, Steve Smith and Barkley (if he’s up to it), plus C-Webb/Shaq.

ESPN has Hubie Brown, who has coached over 1,000 games in the NBA and ABA; Doug Collins, who won more games than he lost in 11 seasons running NBA teams; and Jeff Van Gundy and his .575 career winning percentage. Also Mark Jackson, who was controversial in Golden State but won plenty of games.

TNT has Kevin McHale, who had some nice seasons in Houston, and Mike Fratello, whose winning percentage as a coach (.549) is better than you might think.

Here’s where TNT suffers. Can Shaq and Barkley, who feuded all postseason long, coexist on the same team? Will all TNT’s frontcourt stars be ok splitting minutes? Will Chuck force his way into playing time he doesn’t deserve, costing his team points and alienating his teammates?

ESPN will—for the first time since 1982 or something—get to play the scrappy underdog, which should bring its players closer together. Maybe that can lead to a few more buckets and some stingier defense?

It’s clear that TNT is the overwhelming favorite here, with a front line that would absolutely dominate ESPN. If ESPN tries to guard Kevin Garnett with Tim Legler, it will become the Worldwide Leader in Getting Dunked On.

But if you squint a little, you can imagine a scenario in which the game is close. You’d need T-Mac to drop 30 points in 24 minutes and Chauncey to live up to the Mr. Big Shot nickname he only somewhat earned. If the score is tight at the end, you’d need Hubie, Collins and JVG to out-coach McHale and Fratello.

And you’d need Team TNT to bicker over playing time and each other’s physiques.

Though I can’t totally rule out an upset, there’s only one right answer here. Most likely, C-Webb, Shaq and KG are too much to handle down low, and TNT prevails.

FINAL EDGE: TNT, but it’d definitely be worth watching