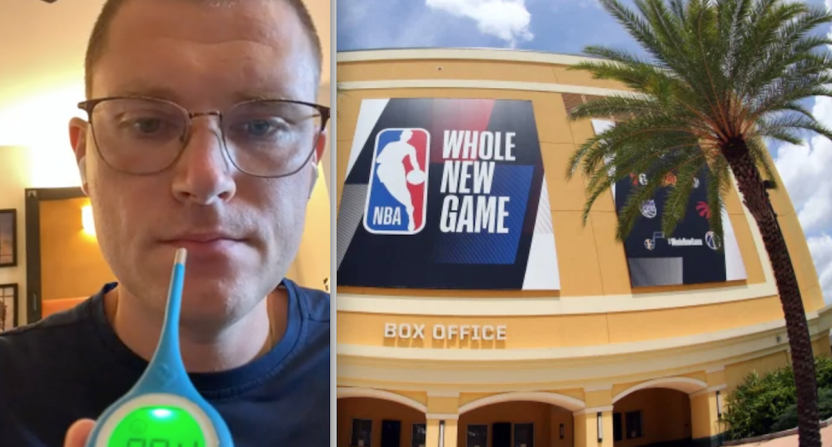 In the early days of the NBA bubble at the ESPN Wide World of Sports complex in Orlando, several reporters covering the unusual setting first-hand shared their experiences of being in quarantine, getting constantly tested for COVID-19, and following the regimen established by the league.

Yet no one has documented life in the NBA bubble for readers — along with sports talk radio and podcast listeners — more thoroughly than Washington Post reporter Ben Golliver.

With videos on Twitter and the WaPo website, Golliver showed the hotel accommodations for media, the work station he’s set up, medical equipment supplied for taking temperature and oxygen levels, and food provided. He’s also risked looking silly for good video by demonstrating how he exercises in a hotel room.

Every sports talk radio host: “So how do you exercise if you’re forced to quarantine for seven days in a @WaltDisneyWorld hotel room at the @NBA bubble?”
A: pic.twitter.com/L8TXIaPYJs

After the early days of quarantine ended, Golliver’s reporting expanded into the rest of the bubble, though media was still restricted from certain areas of the Wide World of Sports campus and prohibited from talking to players and coaches directly, though they did share some common areas in hotel lobbies. Once games started, access was limited to individual player press sessions and Zoom interviews, while covering games from a considerable distance.

The entire experience has provided plenty to document. Not just from a media viewpoint, but also perspective from the players, coaches, team personnel, TV crews, and Disney World staffers all trying to live relatively normally during this most abnormal event. Then there’s the play itself. Whichever team wins the 2020 NBA championship will have done so amid circumstances no club has ever previously faced.

All of these accounts could collectively make for a good book, right? Golliver agrees and will publish a book through Abrams Press titled Bubbleball.

Announcement: My first book will be "Bubbleball," a chronicle of my time in the NBA bubble & the 2020 title chase.
– Thanks Mom, @mattvita at @washingtonpost, Tim Wojcik at @LGRLiterary & @EditorStoltz at @ABRAMSbooks.
– Coming May 2021. Pre-order: https://t.co/BTBjX7omAu pic.twitter.com/q5MSZJrCkv

“Basketball fans will look back on 2020 as one of the most pivotal years in NBA history,” said Golliver in an official press release announcing the book.

“After months of uncertainty and debate, the NBA concluded that a bubble was its best shot to crown a champion and avoid the financial catastrophe of a lost postseason. Against that complex backdrop, Bubbleball will explore a fierce title chase and illuminate the many quirks of my life inside the bubble.”

Whether or not Golliver delves into his media career covering the NBA isn’t certain. But that could be worth a chapter in itself. Golliver began covering the NBA in 2007 with his own blog before joining the staff of Blazer’s Edge and then CBSSports.com. From there, he worked for Sports Illustrated for six seasons and was hired by the Washington Post in 2018, where he covers the league from a national view and writes the “NBA Post Up” newsletter, while also co-hosting several podcasts including Greatest of All Talk and SI’s Open Floor.

Bubbleball is currently available for pre-order through Barnes and Noble, though not yet on Amazon or other online book retailers. As mentioned, the book is currently scheduled for a May 2021 release.