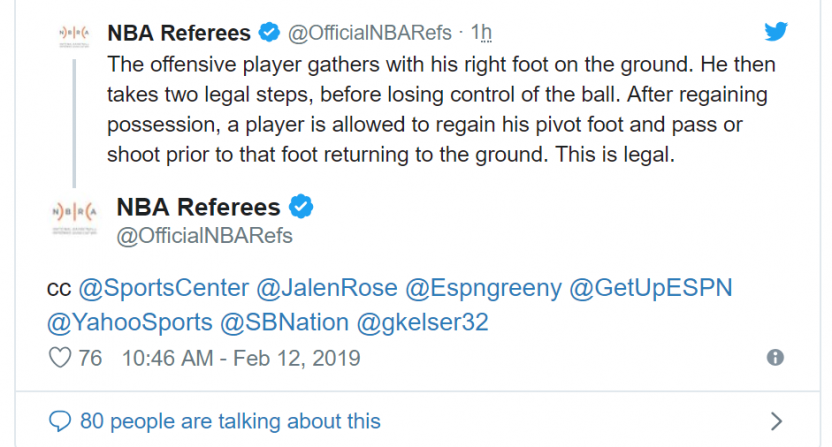 Last night as the Wizards were losing to the Pistons, Bradley Beal traveled. That alone would obviously not be newsworthy, but it was a very special travel: the egregiously obvious violation that goes uncalled.

To anyone who’s even passively familiar with the concept of basketball, that’s a travel. Do that in a pickup game without calling yourself for it, and you’re not going to be laughed off the court and you won’t get another invite. This would have been traveling in the church youth league I coached in high school with my uncle (I was an assistant and games were early Saturday morning, so my attendance was limited), and they didn’t even keep score.

But it wasn’t called live. That’s not the end of the world, of course; refs miss calls sometimes, and it did look so obvious that it may have surprised them into silence. Fortunately for us, the NBA and the NBA referees association have a new commitment to interacting with fans on Twitter, which is expected to ramp up the remainder of the season:

During Monday’s Golden State Warriors at Los Angeles Lakers game on TNT and Wednesday’s San Antonio Spurs at Philadelphia 76ers game on ESPN, fans can tweet @OfficialNBARefs or use the hashtag #RefWatchParty to get responses from officials who are watching the game.

Members of the National Basketball Referees Association first tried out the concept last season during a Finals game. The feedback on the experiment was positive, as referees were active in back-and-forth conversations, addressing controversial whistles and conceding incorrect calls were made when appropriate.

The officials doing the tweeting will have replay center access to aid their tweets, which makes sense as well.

This season, the NBA league office has agreed to work in collaboration with the referee union on this project. As part of the deal, the tweeting referees will have access to the league’s replay center in Secaucus, New Jersey, just like the officials who are on duty that evening, so they can have all the angles available to answer questions.

So, this should have been cleared up nicely with a simple “Yeah, our bad!”, and everyone could applaud the NBA for being so transparent about things. Well, about that:

The offensive player gathers with his right foot on the ground. He then takes two legal steps, before losing control of the ball. After regaining possession, a player is allowed to regain his pivot foot and pass or shoot prior to that foot returning to the ground. This is legal. https://t.co/0hVqgHw3w7

Nah, that’s traveling, guys. Even with the league’s newfound love for the “gather step” it’s still traveling. Obviously it’s tedious to Zapruder every single instance of uncalled or borderline traveling in the NBA, but this one isn’t even really close. Even granted the gather, Beal has clearly picked up the ball, taken two steps, and is about to land on his third when he realizes this and panics. The ball sort of maybe kind of leaves his control for a moment imperceptible in real-time, and he effectively takes two more steps after that third one.

From the time the ball hits the floor until Beal passes it out, you can argue that Beal takes five steps. Determining that Beal losing the ball on his own means a reset of his dribble is an incredible stretch, and if that is somehow the rule, it needs to be changed immediately. Officials can’t possibly determine intent for things like that, and “getting caught in midair with nowhere to go, trying to throw a pass, then yanking it back and having it slip” should not be a play that’s rewarded.

Hilariously, the account then proceeded to tag a bunch of people in media who had ostensibly called out the play as a missed call, because if you’re going to go full Al Riveron, you really want as many media outlets to notice as possible:

Good to see this new social media venture is working out for everyone.