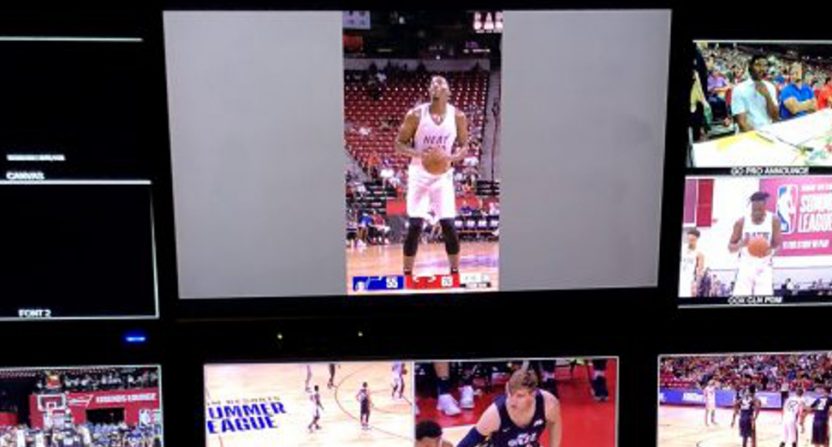 A major sports media trend is the rising amount of video consumed on mobile phones, and how that’s growing for full games as well as individual highlights. And that’s now led to the NBA producing two Summer League games last week (Jazz vs. Heat and Kings vs. Grizzlies, both on July 10) specifically in vertical for League Pass International/Tencent, to try and promote consumption on phones.

SportsVideo.org’s Jason Dachman explored that (and other broadcasting experiments the league did at Summer League) further, diving into what it meant for the broadcast (part of his photo of how this looked in the production truck is shown above):

“If you watch an NBA game right now on our League Pass app in the Vertical View, you’re essentially filling up only about 40% of your screen,” says [NBA director of broadcasting Paul[ Benedict. “So we thought, What if we just shot a game in 9×16 instead of the traditional 16×9? Let’s cover up viewfinders [on the cameras], frame it with bars [on the monitors] in the truck, and just shoot an entire game like that.”

…“Everything is focused on keeping the ball in the center of the frame, so the majority of the game is covered with handhelds, with robos, and with the SkyCam, which all really lend themselves to vertical,” says NBA EVP, Media Operation and Technology, Steve Hellmuth. “We’re trying to truly cover the game in more of an up-and-down [format], so, when we go into replay, we’ll stack a couple of replays and show them at the same time in the vertical format.”

…“Obviously, this is important because our data show that many fans have no intention of ever flipping their phone horizontally to watch a game,” says Hellmuth. “Obviously, this also provides a ton of material for all of our social-media channels besides just the live game. It’s strictly an experiment right now, but it’s something we’re looking at very carefully, and our partners seem very interested.”

It’s notable that this provides extra material for vertical video-focused social media platforms like Snapchat and Instagram, not just the game broadcast. But anything on this front may be more of an extra option than as a replacement for the traditional feed. In a discussion with Pat Muldowney of The Ringer about Dachman’s article, Timothy O’Shaughnessy (ESPN’s creative director of college sports) tweeted he expects this to happen, but more as an alternative than a replacement:

This will def happen as an option soon. Option key word. Alt feed.

Not one quality nba tv director alive will be directing a game vertically.

Hard for the regular viewer to understand how much the director does in terms of live storytelling. https://t.co/8Mh8QXryzI

There are certainly challenges to shooting a game in a vertical format, and doing it as an option may make much more sense, given that a vertical-focused feed isn’t going to play well for anyone watching on a device other than a phone. (Or even for phone viewers who prefer rotating their device to see the traditional feed.) But this is an interesting experiment, and one that could help particular NBA content get even stronger on platforms like Snapchat; it could also further encourage game viewing on phones. We’ll see what comes of it, but it’s definitely a story to keep an eye on.