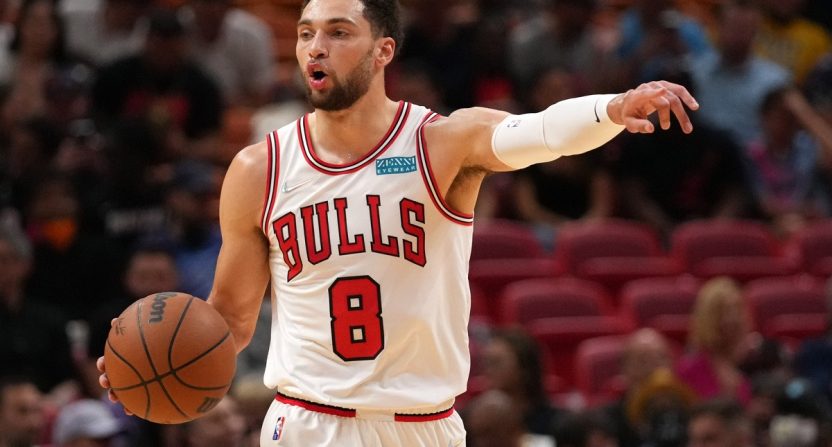 The Chicago Bulls have been dealing with a Covid outbreak within the team over the last week or so. All-Star Zach LaVine entered health and safety protocols yesterday, and Alize Johnson joined him today, making it ten players unavailable for the Bulls.

That’s in addition to team broadcasters Stacey King and Bill Wennington. In response, the NBA will postpone Chicago’s next two games, the first games to be postponed in the league this season.

The NBA is postponing the Bulls' next two games, per sources. At home vs. Pistons on Tuesday and at Toronto on Thursday. Bulls have 10 players in health and safety protocols. While they do meet league-required minimum of 8, league added nuance to decision.

This is the right call. Forcing the Bulls to play with a league minimum of players would be bad enough, but there’s also the obvious issue that the remaining players could also test positive for Covid-19, or at least have been at risk of exposure. The NBA had to postpone games regularly last year as teams dealt with managing the virus, but so far this season the league had avoided doing so thanks in large part to vaccine availability. Obviously not every player has chosen to receive the vaccine, and there have surely been some breakthrough cases as well, but nothing to this point has come close to what the Bulls are going through.

And it’s not just the players; longtime analyst Stacey King has been very open on Twitter as he’s dealt with the effects of the illness, including calling for postponements this afternoon before news broke that the league was indeed doing just that.

Totally agree! I have no idea what the debate is??? This is just insane!! https://t.co/0BuPo41gaT

Good days and bad days @Crayestout but finally got through the 103 temperatures which was pretty scary last week!! Still very weak moving around have a little body soreness but getting the high temperature down was a blessing! I could only imagine if I wasn't vaccinated oh my ?? https://t.co/nP53ay0BXy

The Bulls are scheduled to face the Lakers on Sunday, which will be their first return to action unless it also needs to be postponed. (If you’re curious: none of Chicago’s schedule this week was slated for national television, so that broadcast schedule won’t be affected.)

Hopefully everyone involved here can make a quick and full recovery, of course, as that’s what’s most important. But this is also a reminder that the pandemic is indeed still happening, and even in a relatively controlled environment things can move very quickly.