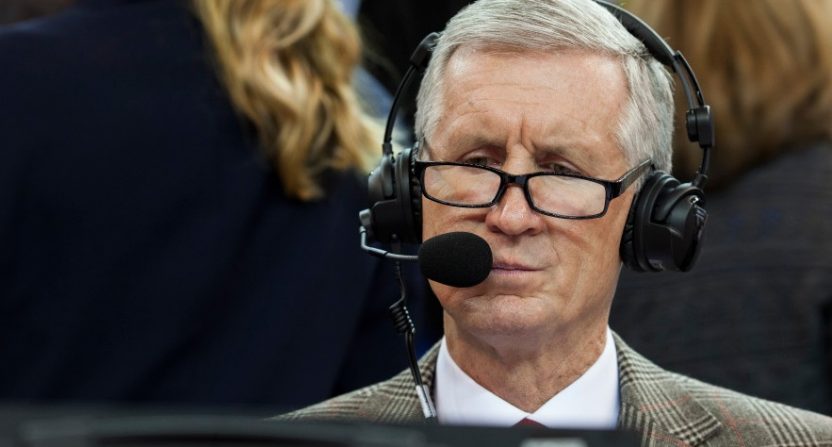 “That was an airball, Mike,” said Van Gundy. “He missed.”

"That was an airball, Mike." ? pic.twitter.com/F32bHGzxaN

Everyone in the booth could have a laugh about it because it was so rare for Breen to misjudge a shot that badly. The veteran broadcaster couldn’t believe it himself.

Breen blamed his view from behind the plexiglass used to shield the courtside broadcasters, scorers, and officials from the court. And it’s certainly feasible that glare from the lights onto the glass would interfere with Breen’s perception. Plus, Gordon’s shot brushed the net, making it look as if the shot could have gone in.

The best line on the matter came from Van Gundy, referencing Breen’s signature call: “You should’ve hit him with a ‘Bang!’ on that too. That would’ve been even better!”

On Monday’s ESPN Daily podcast, Pablo Torre recapped the call and praised Breen for admitting his mistake, rather than try to explain it away. (However, Van Gundy teased Breen about doing just that, as you’ll hear.) But Torre also thinks Breen’s miscall represents something larger. The segment begins at the 23:15 mark:

On ESPN Daily, @PabloTorre talks about Mike Breen’s missed call Saturday night and how it represents what we miss in sports right now: pic.twitter.com/oML50wJT77

“Mike Breen has provided some of the most joyful calls in basketball history,” said Torre. “I was thinking about what may have thrown him off with that airball here. Because, yeah, announcers scan the court with an eagle eye. But they also listen. They ride the crowd noise like a wave, and their voices swell and crash along with that human tide.”

As Mark Jackson pointed out on the telecast and Torre backed up on ESPN Daily, Breen has made some of the most memorable, exhilarating calls ever heard in NBA broadcasting. Here’s one of the many compilations available online:

We can all have a laugh over Breen misjudging Gordon’s three-pointer because such a thing hardly ever happens. And we may never see it again.

But it’s but one indication of how unusual watching games in the NBA bubble has been and how strange a setting it continues to be for signature sporting events like the NBA Playoffs. The NBA’s setup might be better at hiding the lack of fans with video screens around the court showing fans cheering on from home. But it’s anything but normal.

MLB, college football, and now the NFL has each reminded us of just how strange it is to see those empty seats, for fans not to provide the atmosphere to which we’re accustomed. Obviously, that can affect broadcasters too. How could it not? Even the utmost of professionals aren’t immune to the differences in sports during the COVID-19 pandemic.