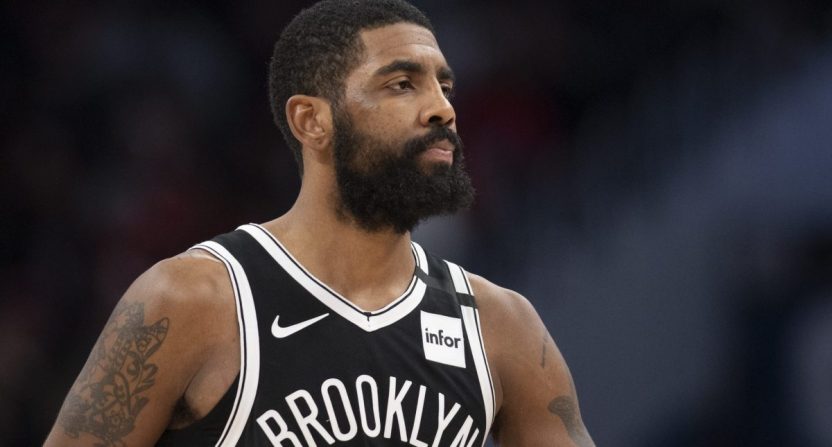 With the NBA opening up training camp, today was a big day for Zoom (or other format) press conferences for players.

The pandemic has obviously removed the typical media scrum, much less the in-person presser, adding another layer of filter between players and media. For one star, though, that’s still not nearly enough filter.

Kyrie Irving is gearing up for a big season with the Brooklyn Nets; a healthy Kevin Durant returning to the action and pairing with Irving has the Nets projected to join the race at the top of the (suddenly tough) Eastern Conference. Obviously, the media in New York and nationally would probably have had a lot of questions for Irving today. Despite/because of that, Kyrie elected to skip talking to reporters in any form beyond a crafted statement.

In it, Irving seemingly signals that he won’t be speaking to the media at all this season, or at least that he’s hoping not to.

Kyrie Irving just released this statement through a spokesperson: pic.twitter.com/uG7l6JhfDC

COVID-19 has impacted us all in many ways, so I pray for the safety and health of our communities domestically and abroad. I am truly excited for the season to start and I am also praying that everyone remains safe and healthy throughout this journey.

Instead of speaking to the media today, I am issuing this statement to ensure that my message is properly conveyed. I am committed to show up to work every day, ready to have fun, compete, perform, and win championships alongside my teammates and colleagues in the Nets organization.

My goal this season is to let my work on and off the court speak for itself. Life hit differently this year and it requires us, it requires me, to move differently. So, this is the beginning of that change.

It’s tough to ever really get inside the mind of Kyrie Irving, but he’s seemingly using the pandemic as a shield to avoid all media interaction. And while the “let my play speak for itself” line sounds defensible in theory, in practice, that is clearly not what the league wants, much less the league’s various media partners.

Usually, teams select one day ahead of the beginning of training camp and make the majority of their roster available to reporters. The league’s COVID-19 health and safety protocols mandate that only a handful of players are allowed in the practice facility at one time. As a result, teams across the league have done a media week with a few players being made available virtually to reporters each day.

The league’s media policy requires active players to be accessible to reporters at practices and games. Failure to do so could result in a fine.

This is probably not going to fly all season. It’d be one thing if the NBA was letting reporters into locker rooms or in close proximity to players. That hasn’t been the case yet, though, and preemptively issuing this statement rather than sitting behind a screen for thirty minutes giving cliched answers is a surefire way to ensure that there’s plenty of off-court narrative before the season even starts.