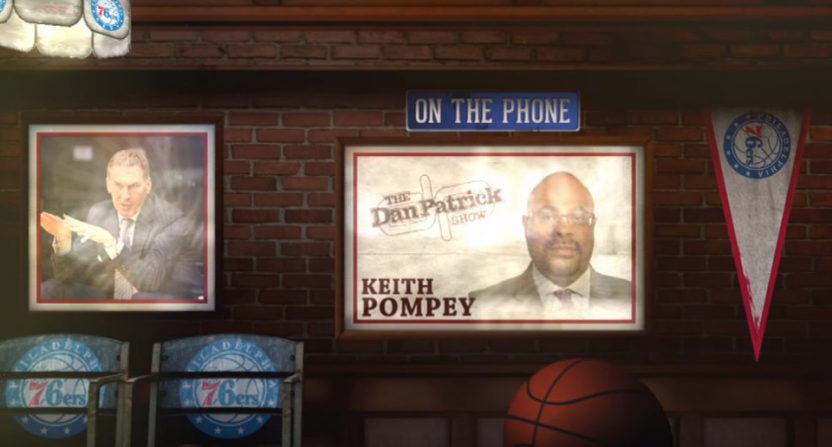 The Ringer’s explosive story from Ben Detrick Tuesday night suggesting that Philadelphia 76ers’ general manager Bryan Colangelo is behind several secret Twitter accounts (Colangelo has admitted to one that’s never tweeted, but denied the others; the team is investigating) has led to a whole lot of fallout, and it could lead to even more. As Michael McCann details at Sports Illustrated, if proven true, this could lead to at the least massive fines for Colangelo from the Sixers and/or the NBA, and could also potentially lead to a firing for cause.

But the Colangelo story also has major impacts on the Sixers’ existing roster, and on their draft preparations and attempts to land certain big free agents, possibly including either LeBron James or Paul George. Keith Pompey, the Sixers’ beat writer for the Philadephia Inquirer, was one of the many media members the accounts allegedly belonging to Colangelo tweeted at to try and plant stories about certain players or narratives. He joined The Dan Patrick Show Wednesday to discuss the whole situation, starting with how it could affect the Sixers’ free agency plans:

“Let’s start with the potential free agents,” Pompey said. “If you’re a potential free agent and you’re looking at this, I’m just using a word that people in my family use, the younger people, it’s a hot mess. It’s one of these things where you don’t want to go to an organization where a general manager or a president is reported to have burner accounts, where he’s criticizing people. And the thing is, these are certain things, some of the things that came out are certain things that reporters knew. Like, for instance, Embiid. We knew that the Sixers weren’t happy with the way Embiid was doing things, they weren’t happy that he was at Meek Mill’s concert dancing. Publicly, they wouldn’t come out and say it, but you knew that behind closed doors, they weren’t happy.”

That’s a point that ESPN’s Adrian Wojnarowski added to Wednesday:

Maybe there’s an IT person who can prove it wasn’t Bryan Colangelo, but here’s one of his biggest problems in disputing Ringer story: Those tweets reflected not only private team biz, but launched personal beefs/jealousies/frustrations that he’s shared inside and outside 76ers.

However, Wojnarowski added that some seem to believe Colangelo’s denials, given how crazy it would seem to do this:

Nevertheless, Colangelo is denying he is responsible for those tweets and many league executives seem to believe this: It is hard to fathom a GM risking his job in such a reckless manner. Many are giving him the benefit of doubt on that level alone. It just doesn’t add up. https://t.co/BDn3n0os2a

But regardless of if Colangelo actually sent these tweets personally or not, there’s still an issue for the Sixers. In his conversation with Patrick, Pompey suggested that this is going to turn free agents away from them.”So if you’re a LeBron James or a Paul George, do you want to come into a situation like this? No! Think about it. This is the time before the draft, so the Sixers are on the West Coast right now, going to these agent-run workouts. When they’re walking in the gym, other teams are like, ‘Wow, look at them.’ They’re not saying ‘Hey Brett Brown, hey Bryan, congratulations on winning 52 games and getting to the playoffs. They’re saying ‘Man, word is their GM has a burner account. No, five of them!’ So this isn’t good.”

Pompey said there are also potential consequences for the Sixers’ existing roster, particularly Joel Embiid (whose actions were criticized by the alleged burner accounts).”And with regards to Embiid, you know, Embiid has a huge personality, he’s a guy, you know, they said Sam Hinkie said ‘Trust the process,’ well, people in Philadelphia will tell you that [Embiid] is The Process. And also being a part of the process. Embiid, for lack of, you know, just being real with you, he does a lot of things that he wants to do. Think about it. He criticized the team, he criticized them for not playing him, early in the season they wanted to have minutes restrictions, next thing you know, he gets increased minutes.””And then Embiid, a second time, when they lose Game 2 to the Miami Heat, he says ‘I’m sick and tired of this.’ He wants to play. Next thing you know, Game 3, Embiid is playing. So Embiid does have a lot of power within the organization. It’s one of those things where I don’t know…it’s just hard, man.”

“And it’s hard to say that…you’d think Bryan Colangelo would have said some things to Embiid behind closed doors, like ‘Hey, I don’t like this,’ have a man-to-man conversation with him. But the things that were said are things that everyone knew that the Sixers didn’t like. But it was to a point where Embiid had so much power, he has so much power, that he basically does what he wants to do.”

It sounds like there’s going to be a lot of fallout from this, both internally and externally. And as Dan Devine points out at Yahoo, even if it wasn’t Colangelo himself running these accounts, but someone else in the organization doing things to try to express his views (or make him look bad), there are still massive issues of trust here for the Sixers’ players, coaching staff, and for those who might consider signing with them. However this ends, it’s probably going to be bad for the team.