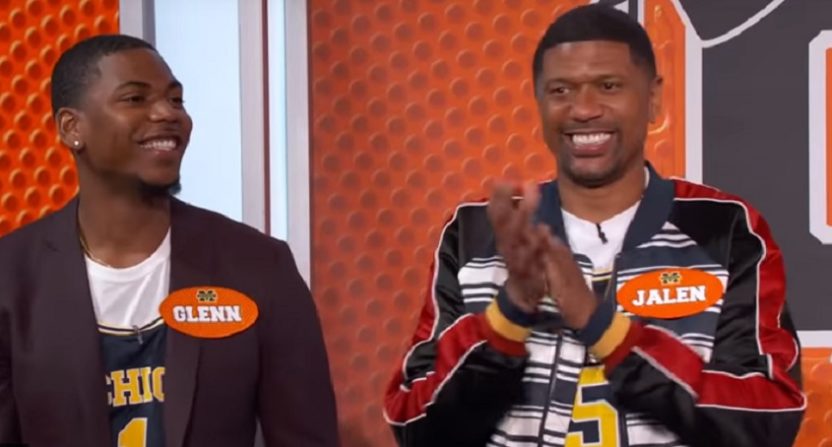 ESPN and ABC NBA analyst Jalen Rose pulled some double-duty prior to Sunday’s Game 2 of the NBA Finals. In addition to his main job as one of the analysts for ABC’s NBA Countdown pregame show, the former NBA star also made an appearance on Jimmy Kimmel Live: Game Night before the game. (OK, it was a pre-taped segment, since Rose had to be in Oakland for his pregame work with Michelle Beadle, Chauncey Billups and Paul Pierce.)

Rose was one of four contestants on Kimmel’s quiz show spoof, “College Knowlege,” in which current and former NBA stars demonstrate how much they learned — or didn’t learn — while in college. Rose was paired with Indiana Pacers forward Glenn Robinson III to represent the University of Michigan. On the other side, Detroit Pistons center Andre Drummond and journeyman guard Caron Butler represented the University of Connecticut.

While both schools and their respective basketball programs were surely happy to get some national exposure in primetime, neither institution might be entirely pleased with the knowledge (or lack thereof) displayed by their former athletes on Kimmel’s game show sketch.

As the elder contestant, Rose took more of a vocal role over Robinson and dominated the early part of the contest. But when we say he “dominated,” we’re referring to the attention he took, not correct answers he gave. Rose incorrectly answered “women” to a question about the Oedipus complex, to which Kimmel diplomatically suggested that a more specific answer was needed. He also had the wrong answer for the largest artery in the human body. (Hey, I got that one wrong too while watching.)

To Rose’s credit, he may have provided the funniest moment during the sketch, calling Drummond out for reaching for his phone as if he was going to Google the correct answer for the artery question. (Drummond later blamed his poor performance on only attending college for six months.) Rose also pointed out that only basketball and football players were forced to go to college before attempting to play professionally. And he redeemed himself by knowing who invented the game of basketball. (His advanced age and experience may have helped there, as he acknowledged.)

Not the best showing by Rose or either of his former college stars (though Robinson was impressive late in the game), but the sketch probably set them up to be ridiculed to begin with. Besides, Rose has more than demonstrated his skills in basketball and broadcasting, both of which have benefited him lucratively. And he’s also an author. So we can cut him a break for not knowing that an Oedipal complex is a subconscious attraction to one’s mother. Jalen wins, and we’re not just talking about Kimmel’s game show.