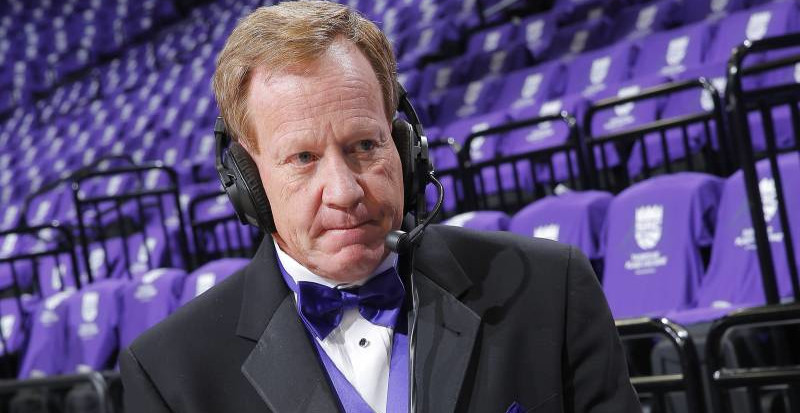 Grant Napear resigned from his role as the local play-by-play announcer of the Sacramento Kings in June following the fallout from a contentious Twitter exchange with former Kings’ player DeMarcus Cousins in the wake of the Black Lives Matter protests occurring across the country. He was also fired by 1140 KHTK where he hosted a radio program.

The specific incident that ended his role with the Kings, which he’d held since 1988, was a response to Cousins regarding his thoughts on the BLM Movement, to which he responded by saying “All lives matter,” the response of choice by those who don’t seem to understand what BLM actually means or purposefully want to downplay its concerns.

Hey!!!! How are you? Thought you forgot about me. Haven't heard from you in years. ALL LIVES MATTER…EVERY SINGLE ONE!!! https://t.co/DfzKl3w0jm

Napear tried to finagle his way out of controversy by playing dumb about the phrase and his intent, but it was too little, too late.

If it came across as dumb I apologize. That was not my intent. That's how I was raised. It has been engrained in me since I can remember. I've been doing more listening than talking the past few days. I believe the past few days will change this country for the better! https://t.co/Gsh84BPBEk

That so many former Kings players came forward to say they weren’t surprised by Napear’s comments only made the end result easier to see coming. In theory, Napear might have taken the opportunity to step back and reassess the context of what he said and what the impact of those words truly are. He resurfaced this week in an interview with Fox 40 and, it turns out, doesn’t seem to have changed his stance one bit.

And as for whether or not he’s sorry about saying the loaded phrase…not at all.

So Napear seems to have dug in his heels and refuse to accept that “Black Lives Matter” is not the opposite of “All Lives Matter,” which is a shame. It could have been a real opportunity for growth and understanding. Instead, Napear left Sacramento, seems aggrieved by the response, and doesn’t appear to have reached out to any former Kings players who would have seemingly been happy to educate him about what BLM is actually about. He’s also the same guy who defended former Clippers owner Donald Sterling by saying he couldn’t possibly be racist because he hired Black people, so it’s par for the course.

Napear recently launched a new podcast called “If You Don’t Like That With Grant Napear.” A recent episode was described as  a chance to “reflect on some of the Sacramento experience with the Sacramento Kings, my upbringing with sports, and a look at where I see things going.” In response to the general question “how do you feel about the way things have turned out, Napear talked in general terms about what happened but didn’t seem interested in digging into the subtext.

“I had a great career. I was an NBA announcer for 32 years. I was at the same radio station for 26 years. And I was fired for saying “all lives matter, every single one” in a response to a tweet about BLM…so how do I feel about it? My radio station put out a statement, they basically insinuated I’m a racist. I mean, my whole life has been about equality, I don’t know how often I can say this…I can sit here and be pissed. I can sit here and throw stones…I have my health. And I always look at my health as the important thing in my life.”

“How would you feel about it? I had to pick up and move. My wife and I sold my house. We moved to Florida for the time being…Put yourself in my shoes. I had a great career. And I was fired for saying “all lives matter, every single one.” Welcome to 2020, right? Welcome to 2020.”

“…We are living in a crazy world and it turned my world upside down.”

He then also went on a rant about the “hatred” on social media and mentioned that the “riots” that happened this summer were “sad.”

Napear told Fox 40 that he hasn’t given up the idea of returning to Sacramento in some form and he absolutely wants to return to sports broadcasting.

“I’m going to do this podcast. I’m going to have fun with it, and then we’ll see where we are at six months or 12 months down the road. I could see myself back in Sacramento, you just never know,” Napear said.

“I would love to get back into announcing, whether it’s the NBA or the NHL or the NFL, whatever. I think that is what I do the best,” he told FOX40. “But I would need someone that would want me as their announcer. So yes, I am keeping all options open.”