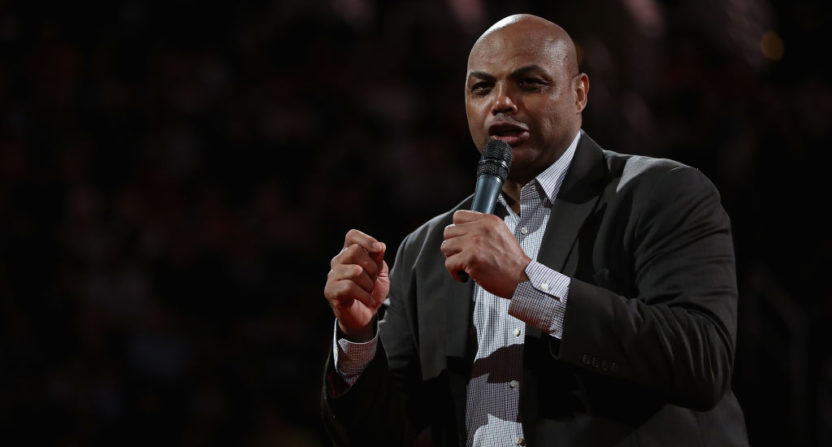 During a spirited Inside The NBA conference call previewing the opening night of the NBA season, the first question that came up was potential player protests and activism among players on and off the court. Charles Barkley opened up the discussion by taking the media to task for how it’s covered the whole Colin Kaepernick, National Anthem kneeling story.

“I’m sick of these media guys who have hijacked the whole Colin Kaepernick situation and made it about who’s protesting, who’s standing for the Anthem,” Barkley told media on the conference call, which was also being livestreamed on various platforms. “I mean you guys have really done a terrible job on this entire story and really ruined it and made it a more divisive issue.”

“It’s not about the flag. Everybody loves the American flag,” Barkley said. “Nobody’s trying to disrespect soldiers. You guys in the media have made it about that. I hope these players smarten up and realize you guys love writing about this junk. It gives you something to talk about on the radio 24/7. But let’s quit talking about who’s kneeling and not kneeling and let’s come up with some solutions.”

Some solutions, Barkley said, include NBA players talking to owners and working together to solve problems, going back to their communities in inner cities and putting time and effort in there. And while Kaepernick originally started the protests initially by kneeling, Barkley said that he wasn’t the main reason for the current dialogue being as prominent as it currently is.

“If you think about it, before Donald Trump opened his big ole mouth, there were only about 15 to 20 guys kneeling,” Barkley said, before admitting it was probably about 30. “And then he called those guys SOBs, which was inappropriate and 100 percent wrong.”

Later in the discussion, Kenny Smith asked Barkley whether the meeting NFL owners and players had in New York City on Tuesday would’ve happened if not for Kaepernick.

“Everyone says, why don’t you just call the owners together? It would’ve never happened, Smith said.”

“To me, all this started happening when the boys started locking arms this year,” Barkley said. “They paid Colin no attention last year. They just got him out the league…There were only a couple of guys kneeling, that’s my point.  Until the president called those guys SOBs, that’s when everything exploded.”

Smith said that players will try to bring awareness to the issue this season, and sometimes that has to come through protest. Smith said that the protests were started by Kaepernick, who he called the most influential athlete when it came to social change in the last 10 years, and without him there wouldn’t be the awareness we have today.

Smith said that if Kaepernick didn’t take that knee, there wouldn’t be the public awareness there is today.

“Was it uncomfortable? Yeah. Should it have been uncomfortable? Without question,” Smith said. “So he made a statement to get awareness, and the awareness was peaceful. So as an American, as an African-American, there’s no way I could ever condemn any form of peaceful protest.”

Barkley said that without peaceful protest, he, Smith and Shaquille O’Neal wouldn’t be where they are today. Smith said that peaceful protest is one of the most American things there are, and that it makes you think and look at yourself and, yes, sometimes make people uncomfortable.

“If somebody ever told Dr. King ‘you can’t protest,’ Medgar Evers, Muhammad Ali. There’s always been protests,” Barkley said. “The fans need to take a step back. We ‘aint just out here for ya’ll enjoyment, to run up and down the court, dunk a basketball, rush for 1,000 yards, things like that. Colin Kaepernick, I respect the guy, he had a serious point we need to discuss. And for people to get mad because these guys want to say something, that’s crazy.”

O’Neal said he had a problem with protests happening during the National Anthem because of public perception. He quoted Jim Brown, who said that he would’ve stood during the Anthem.

“So the problem arises when— and I know people say it’s not about the flag— but when you do it at that moment, there’s a large majority of people who think you’re disrespecting the flag,” O’Neal said. “So sometimes the message doesn’t get heard.”

O’Neal also said that for people like Kaepernick, and like Ali and Bill Russell before him, once you become a social activist, you can’t ever stop.

“Don’t just do it because you’re trying to get your follows up, or you’re in the moment,” he said.

Ernie Johnson said that whether players will protest on the court could change on a weekly basis, depending on statements that are made or events that may occur and move people to action. O’Neal thought some form of activism would take place during the opening night doubleheader of Boston at Cleveland and Houston at Golden State.

“I think you’re gonna see something in some way because this issue still hasn’t gone away,” Smith said. “Because it’s the same issue that my dad was talking about when he was my age.”