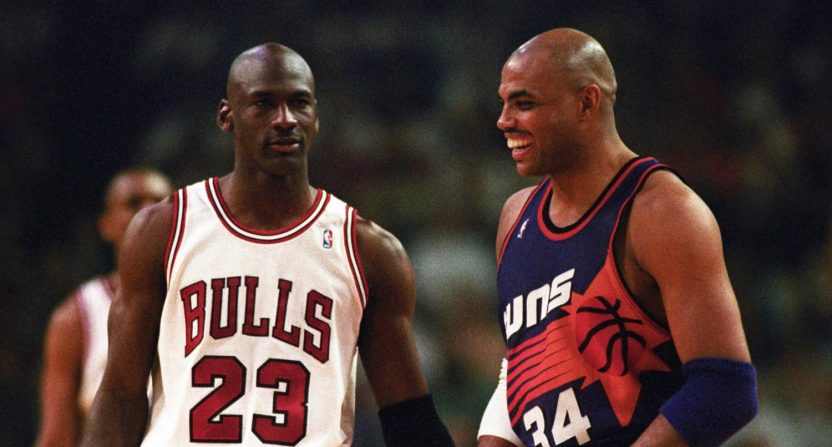 Charles Barkley and Michael Jordan used to be close friends, but their friendship ended abruptly after Barkley criticized Jordan’s ownership tenure and the six-time NBA champion took that personally.

Barkley joined Tom Brady and Jim Gray on the latest episode of SiriusXM’s Let’s Go podcast. During the interview, Brady asked Barkley if there have been any ramifications for being open and honest throughout his career as a basketball analyst. According to Barkley, losing Jordan (the two are seen above in the 1993 NBA Finals) as a friend is one of the biggest fallouts from his media career, which has been so successful for Barkley’s willingness to call people out when warranted.

“I think probably, me and Michael [Jordan] were best friends, that’s probably the most prominent thing,” Barkley said. “Michael Jordan, losing his friendship was probably the most prominent thing that’s happened to me. But I was being honest about what I thought. I said, ‘Listen, the toughest thing about Michael, he’s got to put better people around him.’ Because the toughest thing, when you’re famous, they’re on your private jet, you’re buying all the drinks, you’re buying all the dinners. Very few people are gonna be honest with you.”

The comments Barkley was referring to occurred in 2012 during a radio interview with Chicago’s Waddle & Silvy on ESPN 1000. At the time, Jordan was about six years into his tenure with the Charlotte Hornets organization and just two years removed from becoming majority owner of the franchise. Barkley told ESPN 1000 that his friend “has not done a good job” with the franchise and blamed Jordan for not hiring enough people who are willing to challenge him.

“I try to surround myself with people like, hey, if I’m screwing up, please tell me,” Barkley explained to Brady this week, more than 10 years after the fallout with Jordan. “And Michael got offended about something I said about him. And we haven’t spoken in probably almost 10 years. And he was my best friend at the time. And I love the dude like a brother and we’re both stubborn and we haven’t talked.”

Barkley didn’t state anything unfair when he criticized Jordan. It’s widely understood that Jordan’s ownership tenure has not been nearly as successful as his playing career from a performance standpoint. Since Jordan became the majority owner of Charlotte’s NBA franchise in 2010, the team has made just two playoff appearances and has yet to be deemed a championship contender.