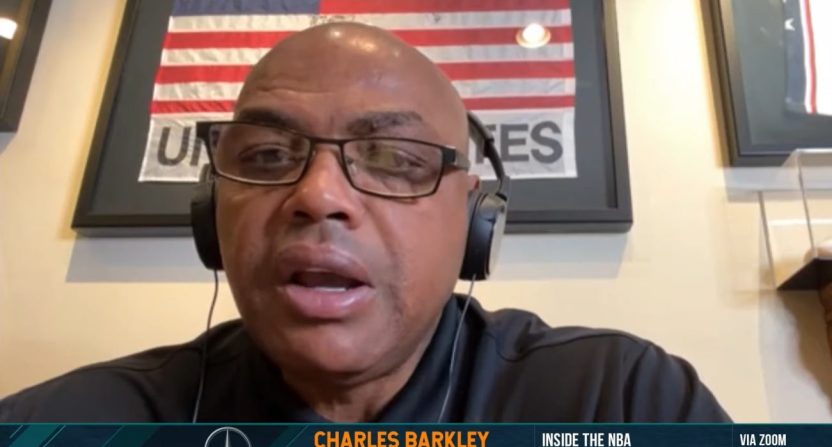 Charles Barkley’s bouts with Golden State Warriors fans have been well-chronicled, but the Hall-of-Famer insists they have no bearing on who he picks to win a game.

Tuesday morning, Barkley joined The Dan Patrick Show to break down the NBA Finals featuring the Golden State Warriors and the Boston Celtics, scheduled to tip-off Thursday, June 2. After Barkley picked the Celtics in six, Patrick asked if his battles with Dub Nation influenced the decision, an accusation the Turner Sports analyst pushed back on.

“No, not at all,” Barkley quickly said. “Dude, I didn’t think the Mavericks could beat the Warriors, as I said, I just root for them cause I hate the Warriors fans.”

According to Barkley, he doesn’t pick against the Warriors because of their fans, he only roots against them. But despite now claiming he never thought the Mavericks could beat the Warriors, he did pick Dallas to upset Golden State before the Western Conference Finals began.

“I’m gonna go with the upset, I’m going with the Mavs,” Barkley said on Inside the NBA after Dallas knocked off the Phoenix Suns. There was no nuance surrounding his Western Conference Finals pick, Barkley made it very clear that he was predicting Dallas to upset Golden State, not just rooting for it to happen.

Barkley has again picked an upset by going with Boston over Golden State in the NBA Finals. Does that mean he’ll similarly claim he didn’t actually believe Boston had a chance if the Warriors end up winning their fourth championship in eight years?

“They used to have great fans when they were over in Oakland,” Barkley said of the Warriors faithful. “And now they’ve just got a bunch of jackasses over in San Francisco. But that never factors in. I like the Celtics to win the series, I just think they’re gonna be too big and their depth is gonna win the series for them.”

The Warriors moved from Oracle Arena in Oakland to the Chase Center in San Francisco prior to the 2019-20 NBA season. Barkley’s angst toward Warriors fans appeared to reach a boiling point during this year’s Western Conference Finals when fans began throwing things at him on set and he responded by dumping water on the crowd.