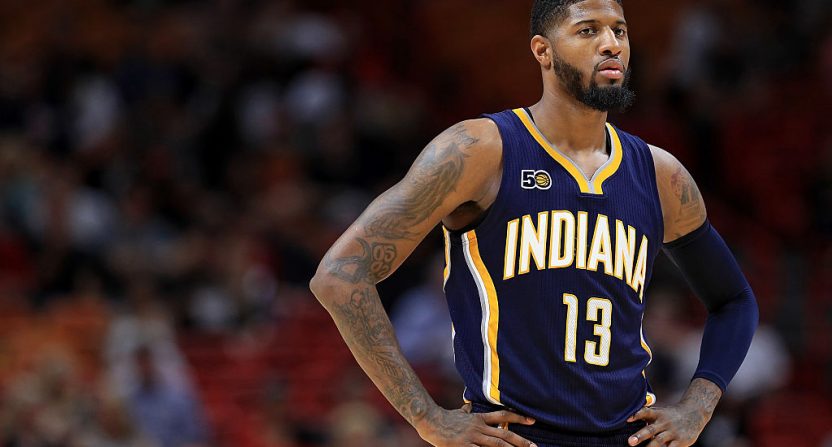 Many are trying to make the argument that members of the NBA media who vote for the All-NBA teams are taking on a new role this year thanks to the Designated Player Exception. That exception allows for a player on his second contract who’s approaching free agency to sign a much larger contract with the team that drafted him or traded for him while he was on a rookie deal if he’s named MVP, or defensive player of the year, or selected to the first, second, or third all-NBA team. In the case of Indiana Pacers’ star forward Paul George, the difference in the contract the team can offer him could be about $75 million.

The outcome here may lead to the Pacers either locking him George long-term or trading him away before he leaves in free agency, and that’s a big deal. Situations like that have direct implication for franchises (both the Pacers and teams that might try and lure George away), and that’s why the NBA recently changed awards voting to eliminate team-employed broadcasters and writers; many may have done the job well despite working for an interested party, but that leads to at least potential bias. Beyond that, many are upset that this is being determined by even independent media. However, the attempts to portray this as an unprecedented media role and one voters should reject are missing some key points.

The most notable case against media voting for these awards was made by Adam Kilgore of The Washington Post Tuesday. Kilgore’s piece, entitled “In a strange twist, media will decide whether Paul George can bank an extra $70 million,” argued that this role falls well outside of media members’ job descriptions, and that they should reject it. (It’s notable that the Post has a longstanding paper-wide policy against its staffers voting on awards, so Kilgore wouldn’t be voting on these awards regardless of if they were directly linked to contracts. And to his credit, he further clarified his position on Twitter and made some decent points. However, his perspective isn’t the only one.) Here are some of his key lines:

In theory, a clause tying awards voting to maximum salaries in the NBA’s new collective bargaining agreement seemed fraught. Now that it is about to be put into practice, it seems downright nuts.

…Determining the position of a versatile big man or the sixth-best forward in the NBA should be harmless, funky riddles for award voters to grapple with. Instead, the answers to those debates could send shock waves through the league.

From the voters’ perspective, the arrangement stands in such opposition to core tenets that it’s irrational for them to agree to take part. Writers and broadcasters will be determining seismic events for the people and institutions they cover. That’s antithetical to the simplest journalistic principle. Because voting is transparent, the voters will feel pressure — whether explicit or implicit — from both fan bases and people they cover, from agents to executives.

There’s no doubt the majority of voters will take the awards seriously. But the process and the stakes calls their objectivity into question, fairly or unfairly. Perception matters.

Outside of sports, Kilgore’s own paper has often done so, with the Watergate coverage by Bob Woodward and Carl Bernstein playing a key role in impeachment proceedings against President Richard Nixon. More recently, David Farenthold’s Pulitzer Prize-winning coverage of President Donald Trump’s charitable donations set a national topic of conversation. Inside sports, work like Alan Schwarz‘s New York Times series on the NFL, concussions, CTE, and cover-ups has led to major motion pictures and seismic shifts in that league’s policies. And this happens on smaller scales too; consider the reporting on Pete Rose’s gambling that led to his first ban from baseball and played a factor in Rob Manfred’s recent decision not to reinstate him. Media coverage often has consequences.

That’s true in the much-smaller-stakes cases of award and Hall of Fame voting too, and it was true long before the NBA explicitly linked the ability to offer this specific contract to All-NBA team selections. Every MVP award, All-Star selection, or all-league selection has some impact on a player’s career, frequently boosting their value if they do hit the open market (or sign an extension before reaching it) and affecting their chances of making the Hall of Fame, as well as their overall legacy and marketability. Everything from shoe deals to post-career autograph sessions and car-dealership endorsements often considers how many all-star, All-NBA and other awards the player has received, even if that’s not specifically spelled out in those contracts the way it is here.

But this goes well beyond award voting, and it also extends to papers like the Post that prohibit their staffers from voting for awards. Every single story in a media outlet has the potential to impact someone’s career, or the perception of them. Do individual game reports often do that? Probably not. But if a player’s regularly portrayed as a locker-room problem (or conversely, as a “good guy”), that can have an effect. If a coach or general manager’s moves are regularly described as stupid or brilliant, that can have an effect. And if patterns show up across multiple media outlets, that can often really have an effect, especially when it comes to columnists. Teams won’t admit to making coaching or GM changes or trades based on the media, but being regularly roasted in the media has arguably led to plenty of moves over the years. Media coverage impacts people’s lives; media members should be aware of that in general, not just in specific cases like the George vote.

In a lot of ways, determining this exception by a media vote is the best way to do it (and Kilgore even notes that it’s a good solution for the league, as other options like specific stats or All-Star selections are influenced by playing time/teammates/fan voting and more). Especially once you take those team employees who have a potential direct financial interest out, you’re now left with a pool of experienced NBA broadcasters and writers who have the ability to consider multiple statistical categories and any other relevant information.

Are those people going to be individually perfect? Probably not; they may have biases for or against a player, they may favor one stat over another, they may be impacted by what games are shown nationally. But they are able to consider the whole picture more than most stats (excepting overall value stats such as PER, but those have their problems and critics too), and determining this through the votes of 100 well-qualified people has plenty of merit. So it’s understandable why the NBA and the NBPA chose this system (which, as noted above, Kilgore concedes).

What about for the media, though? Well, from one perspective, all they’re being asked to do here is their jobs. Evaluating players is a key part of the job (especially for anyone in any sort of analysis role, whether that’s columnist or color commentator), and it’s notable that even non-voting papers like the Post run pieces on their writers’ choices for MVP. Yes, their evaluation has direct consequences here, but just because those consequences are explicit, it doesn’t make it a sea change; these evaluations have always had consequences for the players involved. (For one example, think Steve Nash’s in-career/post-career endorsements and projects were/are aided by the “two-time NBA MVP” line on his resume? They sure have been.)

It’s understandable why some media members may feel uncomfortable voting on something with direct financial implications for a player like George, and if they want to recuse themselves, fine. But if they’re otherwise qualified, they’re reducing the caliber of the pool and thus making the eventual decision worse (from a theoretical standpoint, at least). And drawing the line at “this directly impacts if they can offer a contract” feels foolish, considering that these votes have always had financial impacts on those involved. Yes, this may feel more silly, as whether someone made third-team All-NBA wasn’t necessarily as much of a big deal as the more prestigious awards before this new provision. But the concept isn’t any different; these votes matter, but previous votes mattered too.

Overall, this feels like a pretty good solution for everyone. The NBA allows its teams to offer certain players bigger contracts based on whether a national panel of qualified people believes they’re a legitimate star, which seems like one of the best ways of doing it. (You could argue that the NBA’s salary cap should allow teams more freedom to offer big money to whoever they want, but that’s not the current case; if we have to figure out who qualifies or not, this panel isn’t a bad way to decide that.) Meanwhile, these voters were already naming MVPs and all-NBA teams, and often doing so in their own pieces and not just a ballot. This just gives those awards some official significance beyond a plaque.

Most importantly, though, the George situation isn’t really a departure from journalists’ traditional roles, at least not from this corner. It’s a recognition of the impact of media coverage and what it can mean. Media has always carried an analytical component providing judgment, especially when explicitly stated in columns and editorials, but even “just-the-facts” reporting has an impact on those reported on. The NBA’s new contract provisions make that link to compensation more explicit, but that isn’t necessarily a bad thing. At the very least, it should get voters to consider these selections carefully. But they should have been doing so all along. This has always made a difference for those voted on; the only change now is how explicit that difference is.