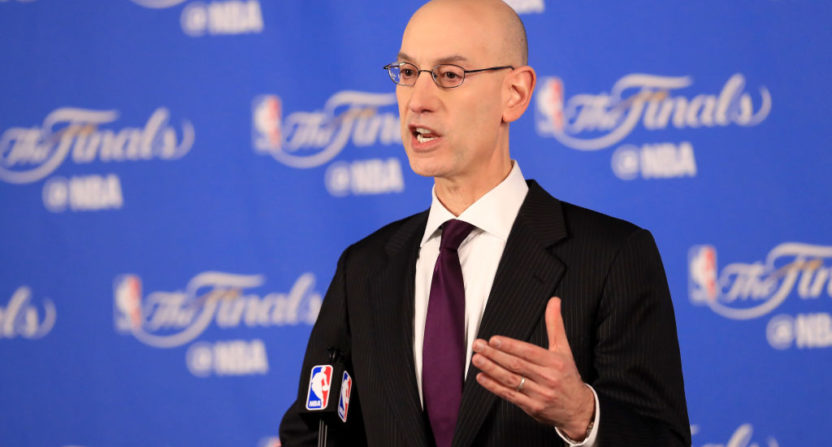 Of the major American league commissioners, Adam Silver certainly seems to have the best grasp on where his respective league should be going next. From legalized gambling to cord-cutting, Silver always seems to have considered the NBA’s next move from multiple angles.

That’s apparent in this lengthy, wide-ranging interview with strategy+business, in which Silver comes across as possessing an innate understanding of what makes the NBA appealing in 2018, and how to strengthen that appeal while broadening the audience. Trying to imagine Roger Goodell’s answers to some of these questions makes for an entertaining mini-game, too.

For example, on the NBA’s willingness to let people share highlights:

S+B: A lot of those elements you just mentioned are embedded in the structure of the game. But how much of this is a function of the league’s intention to cultivate social media?

SILVER: We promote the posting of our highlights. The highlights are identified through YouTube’s software, and when ads are sold against them, we share in the revenue. We analogize our strategy to snacks versus meals. If we provide those snacks to our fans on a free basis, they’re still going to want to eat meals — which are our games. There is no substitute for the live game experience. We believe that greater fan engagement through social media helps drive television ratings.

That’s such a smart approach, especially when placed against the oddly backwards social media highlight policies of leagues like MLB and the NFL. But while the whole interview is fascinating, there’s one section that stood out, when Silver is asked about how the NBA uses data collected from its direct-to-consumer streaming service to make big adjustments to the on-court product.

Traditionally, leagues look to make changes to the sport for the sake of conventional broadcast partners, but that’s not what the NBA did:

SILVER: With our online products, like League Pass, we’re able to monitor not just sales, but usage. We know how long people are watching those games, and what portions of those games. Through our over-the-top products and our direct-to-consumer relationship, we have ways of measuring interest that just don’t exist in our conventional television relationships.

S+B: How do you apply that data?
SILVER: From last season to this one, based in large part on the data we gathered, we changed the format of our game. We went from a possible 18 time-outs to 14 time-outs, we standardized the length of the time-outs, and we shortened halftime by a few minutes. And we made additional changes to the commercial format, because we were able to see exactly where we were losing fans.

Those are real pace-of-play initiatives that have very little to do with the action fans love on the court, unless you really miss your team having two extra timeouts. Contrast that with baseball’s efforts, which include sticking a runner on second base in extra innings in the minor leagues, and which seem to be more haphazardly considered overall. The NBA, though, is making adjustments based on actual data, and data for streamers, which is the inevitable future of broadcasting.

Here’s Silver on the bet way to increase the viewing audience:

Our games are roughly two hours and 15 minutes, but the average viewer is watching for approximately 50 minutes. We know that the most efficient way to increase our ratings is not to find someone who isn’t watching at all, but to take those people who are watching an average of 50 minutes and get them to watch 55 minutes. And that’s where changes in the presentations — finding other ways to engage fans, creating other data fields for our viewers, or using different audio experiences like player mics, or different camera angles — can help increase our ratings.

And the rest of the interview is worth it too, as Silver talks about where he sees global expansion and on what timeline. The NBA is clearly in good hands from a media and business perspective, and it’s interesting to wonder how other leagues can try to catch up.