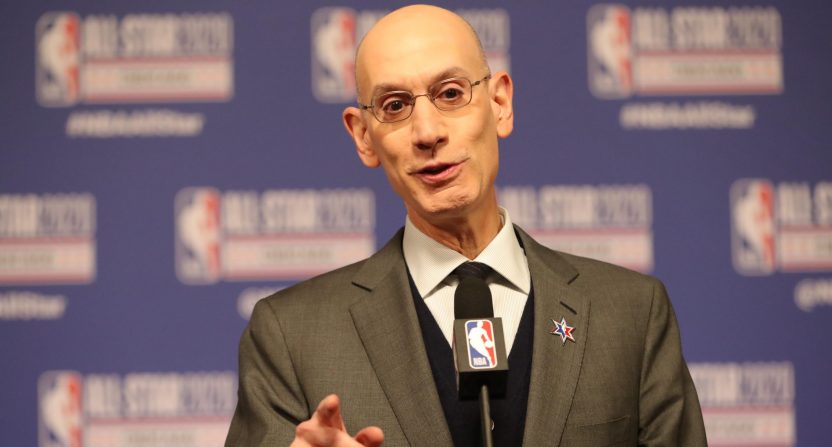 NBA All-Star Weekend culminates on Sunday with the All-Star Game and spirits have been high on the court. The 3-Point Shootout was a nailbiter that came down to the final ball and there was much drama surrounding the outcome of the Slam Dunk Contest. Oh and Zion Williamson destroyed a rim during the Rising Stars Challenge.

Off the court, however, the NBA is staring a few existential issues in the face and starting to deal with the consequences. Sports Business Journal reported last week that NBA viewership is down 12% for the league’s national broadcast partners (though NBA League Pass subscriptions are up 11% globally and digital viewership is up 16% on TNT and 19% on ESPN).

At a press conference over the weekend, Silver described how the league is looking to adjust with a younger audience that continues to eschew traditional TV broadcasts for online outlets and social media.

“It’s well-known that on one hand we’re celebrated by some because we have such a young fan base, but that young fan base is disconnecting from pay television in record numbers” Silver said.

Those young viewers are engaged with the NBA in social media he said. “but we haven’t found a way to connect those young fans to our broadcast through whatever platform they’re going to be delivered.”

“I think it’s a very solvable problem. Our two primary media partners, Disney and AT&T, are both very engaged in these issues.”

Meanwhile, Silver also spoke on the fallout from last year’s international incident involving Houston Rockets GM Daryl Morey. After Morey shared his support for Hong Kong in a tweet, the entire relationship between the NBA and China seemingly crumbled within days. The Chinese Basketball Association suspended all cooperation with the Rockets, China stopped broadcasts of all NBA preseason games, and Chinese state media went as far as to announce that Adam Silver and the NBA would face “retribution” for not making sure Morey was fired and handling the controversy differently. Since then there have been no NBA game broadcasts on Chinese TV. The only way for Chinese fans to see NBA action is via Tencent, a streaming network that shows a limited number of games as well as the All-Star Weekend festivities.

Adam Silver says financial losses from the China controversy aren’t as significant as some have estimated, but they are “substantial.” pic.twitter.com/AQKv9yggL5

Silver spoke at length about the impact of the league being shut out of the market for the first time, noting that while the full impact will not be known for some time, the NBA will lose “hundreds of millions” in revenue over it.

“In terms of the precise numbers, it’s still a little bit uncertain,” Silver said.“I think that the magnitude of the loss will be in the hundreds of millions of dollars. Certainly, probably less than $400 million.”

He later clarified: “It’s substantial. I don’t want to run from that. We were taken off the air in China for a period of time, and it caused our many business partners in China to feel it was therefore inappropriate to have ongoing relationships with us. But I don’t have any sense that there’s any permanent damage to our business there.”

Silver added that while the NBA is not pressing the issue and that the issue is “outside of our control,” he does sense that the country and the league will come back together “at some point in the future.” In the meantime, the NBA has dropped its salary-cap projections for the 2020–21 season in anticipation of lost revenue.

The NBA took a lot of flak for seemingly kowtowing to the Chinese government in some aspects of the controversy and arrangement, especially given the human rights record of the nation. While Silver and the league maintain that they’re taking the high road morally, they still seem pretty happy to try to mend the relationship and eventually get back on financial track.