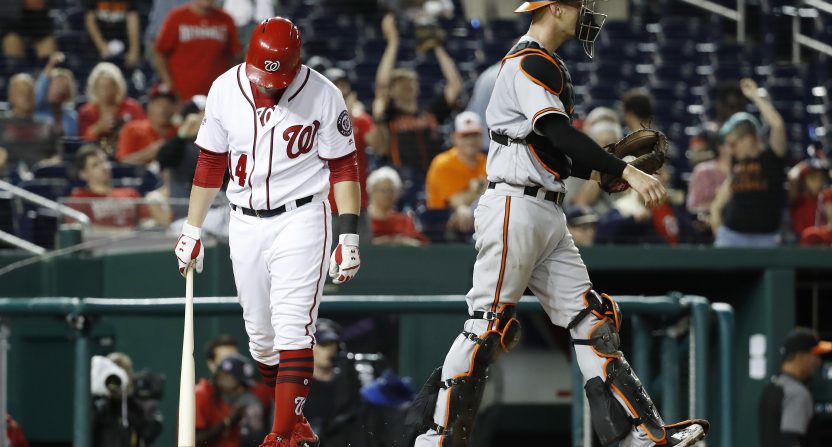 For years now, the Washington Nationals and Baltimore Orioles have been sparring over Nationals rights fees on MASN, the RSN owned primarily by the Orioles that airs both teams’ games.

The TLDR summary of the situation is this – the Nationals felt they weren’t earning proper rights fees from MASN, starting way back from the 2012 season, when both the Orioles and Nationals were supposed to agree to a rights fee for Washington. That didn’t happen, and in June of 2014, an independent committee ruled in favor of the Nationals. The Orioles appealed to not pay the increased rights fees (dating back to 2012, mind you), dragged the Commissioner’s Office into the mess as well, the original ruling was vacated, and the two teams were directed back to the same damn independent committee (now made up of three different people) to search for a resolution.

What’s changing this week? The case is going to be heard again by the committee (the Revenue Sharing Definitions Committee, which I’ll just refer to as the RSDC from here on out) and the Nationals and Orioles could finally have a resolution in this dispute that’s been raging on for over six years now.

That panel will hear the dispute Thursday and Friday, as far as anyone with the Nationals knows, in a process that has been rather hush-hush — to the point that even league spokesmen would not provide information about the timing of the hearing. It will be asked to determine the rights for the first five-year period (2012-2016) and the current five-year period (2017-2021), at which point the Nationals will be owed those sums immediately.

The Post also reports that the Orioles are expected to appeal (duh), meaning that no matter what the decision from the RSDC, the Nationals probably won’t get their money in the near future. Furthermore, because of loans from MLB and revenue sharing payments that weren’t made, the Nationals will have a nice chunk of their seven seasons of past TV revenue immediately taken from them.

But the Orioles and MASN can appeal this decision, too. If they do, the money will remain tied up indefinitely, as it has for years, until courts can finally shut down every Orioles avenue of inquiry. The Nationals have changed counsel, and were most recently represented by Stephen Neuwirth of Quinn Emmanuel. The conflict of interest should be gone. As for the solvency of the network, some considered that argument specious in 2014, though perhaps it will come up again.

Even if the Orioles do not appeal the decision made later this week, the Nationals will not necessarily experience the kind of windfall everyone might expect. Because they have not had full television revenue for years, they have not been able to participate fully in revenue sharing. Once a sum is awarded, the league will distribute the amount the Nationals would have been paying annually in one lump sum. They will also need to pay back Major League Baseball, which loaned them money to help the team operate while the revenue in question remained in limbo.

MASN is a weird entity, because the only teams it has the rights for in the Maryland/DC area are the Orioles and Nationals. The Wizards and Capitals both air on NBC Sports Washington, who also air programming featuring the Redskins, DC United (for now, at least), and the Washington Mystics. MASN airs the region’s two MLB teams and uh…a whole lot of college sports and nationally syndicated programming.

Having to pay a nine figure settlement to the Nationals in one lump sum, along with increased rights fees in the future, could be a critical blow for the network (which, not coincidentally, is one of the many reasons argued in the appeal back in 2014). We’ll see what the RSDC’s eventual decision is this week, but I highly doubt we’ve heard the last of this saga.