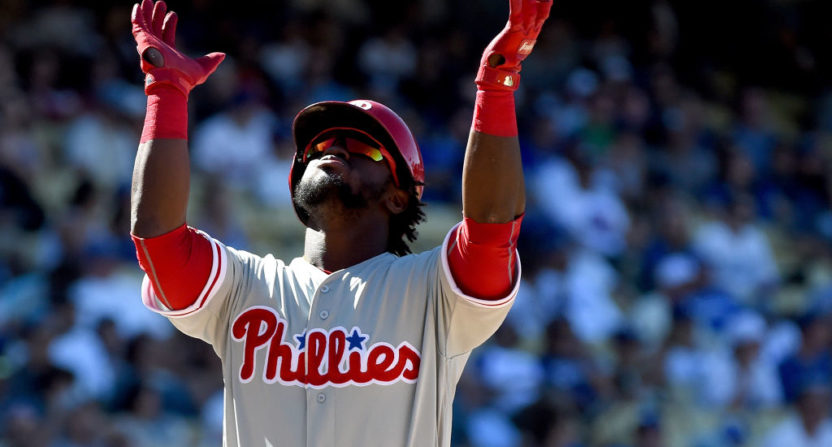 Odubel Herrera was a bit of a breakout player for a Phillies franchise in full rebuilding mode in 2016. Entering the 2017 season, Herrera was expected to continue being relatively reliable at the plate, but that has not quite panned out so far. As a result, questions about Herrera’s role in the rebuilding franchise are being analyzed, as he is the only player signed to a guaranteed contract for the next five years.

Among those questioning whether or not the Phillies can or should embrace a rebuild that works around Herrera in center field is the greatest Phillies player of all time, and a current broadcaster for the team, Mike Schmidt. The former Phillies All-Star, MVP, and Hall of Famer comes from a different breed of baseball player, so it is expected his old-school baseball mindset may not be quite on board with the newer styles and flash displayed by players like Herrera. And with Herrera struggling (prior to the last couple of games), Schmidt says there should be some questions about Herrera’s role in the future plans for the Phillies.

Oddly enough, it is not Herrera’s baseball skill that Schmidt says could be a problem in building around Herrera. It is Herrera’s native language.

“My honest answer to that would be no because of a couple of things,.” Schmidt said. “First of all, it’s a language barrier. Because of that, I think he can’t be a guy that would sort of sit in a circle with four, five American players and talk about the game. Or try and learn about the game or discuss the inner workings of the game. Or come over to a guy and say, ‘Man, you gotta run that ball out.’ Just can’t be — because of the language barrier — that kind of a player.”

Yeah, that’s some old school, and perhaps misguided logic, from Schmidt. You can look around the league and see plenty of examples of franchises thriving around a player with a Latin background. Things seemed to work out pretty well with David Ortiz in Boston, right?

Make no mistake about it. Herrera is not Ortiz. But Schmidt’s comments come in the city that embraced Carlos Ruiz as one of their own, and his English was a constant work in progress too. It’s almost as if having the right players around the roster makes up for any supposed language barriers. It also seems as though Schmidt is completely dismissing the influence of Latin players around baseball. In 2017. Jeez.

Schmidt did go on to dig into the on-field concerns about Herrera as a centerpiece of the future of the organization, and even suggested Herrera’s personal flair can be a good thing for a team.

Schmidt’s comments about the language barrier seem to overshadow the optimistic spin the former Gold Glover has for Herrera. But his comments are even more interesting when you consider Schmidt has become a regular in the television broadcast booth in recent years. Schmidt joins the TV broadcast for weekend home games during the season. His commentary is always of the style to sit back and just talk baseball, and it is enlightening and educational at times, especially when paired up with John Kruk in the booth. Overall, Schmidt does want players like Bryce Harper and Herrera to enjoy playing the game their way, because they represent the future of the game.

So long as they can overcome that supposed language barrier, I suppose.