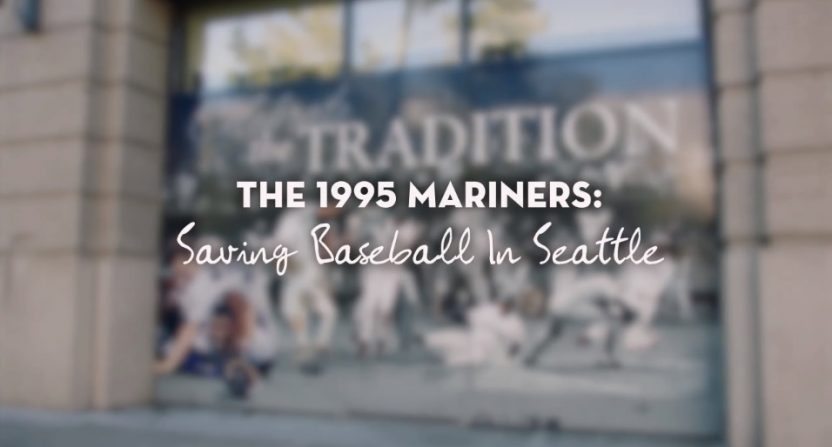 The latest edition of MLB Network Presents has one of the most interesting premises yet. The traditional July installment of the documentary series doesn’t focus on a championship team, or an incredible dynasty, or an iconic player – it focuses on a franchise that has never won a pennant and a season where they finished with the fourth-best record in the American League. But that broad description undersells the 1995 Seattle Mariners, their incredible comeback run in the AL West, and the looming specter of the team being forced to move if a ballot referendum for a new stadium wasn’t passed.

Former 1995 Mariners featuring Griffey, Johnson, Edgar Martinez, Jay Buhner, Joey Cora, Tino Martinez, Alex Rodriguez, Dan Wilson, Mike Blowers and Doug Strange, each describe how the team persevered through pivotal moments during the season, including losing Griffey to a broken wrist for three months, and believing in manager Lou Piniella’s “Refuse to Lose” attitude. A proposal for a new ballpark failed on September 19, making it look like 1995 would be baseball’s last season in Seattle. Led by Johnson’s power-pitching and a lineup that boasted 54 total career All-Star appearances, the film explains how an electric home-field atmosphere at the Kingdome helped galvanize Seattle in erasing a 13-game deficit to win the AL West and beat the New York Yankees in the ALDS when Griffey famously raced home with the winning run. “Without that ’95 team, there wouldn’t be baseball right now in Seattle,” recalls Cora.

This is a rare sports documentary that focuses on two stories, gives them both equal billing and attention, and manages to tie them together perfectly. The Mariners went on an incredible run in the second half of the 1995 season, rallying from 13 games back of the Angels in early August to finish the year 35-20, forcing a one-game playoff in the AL West (which Seattle won in a 9-1 rout). The ballot measure for the new stadium failed before the season ended, but after the Mariners propelled themselves into the playoffs, the state of Washington passed a different, controversial funding package for the stadium.

If the Mariners don’t go on that run at the end of the year, drawing 12 massive crowds to the Kingdome through the end of the regular season and playoffs, would the state have felt the need to approve the funding? Would the Mariners still be in Seattle today, or would the city have lost two MLB franchises? No matter your feeling on public funding for stadia (for the record, I could not be more strongly opposed), the Mariners’ transformation from the chew toy of the American League for nearly 20 years to a legitimate contender at the end of the 1995 season likely had a significant effect on keeping the team in town.

The film uses an impressive amount of archival footage from the 1995 season, including key moments from regular season games, highlights from the 1995 play-in game against the Angels, and the unforgettable five-game ALDS victory over the Yankees. Interviews with many of the key Mariners players from that season are also featured, including Ken Griffey Jr, Edgar Martinez, Jay Buhner, Randy Johnson, and Alex Rodriguez. The highlights are probably Griffey’s interviews, especially when talking about the end of Game 5 of the ALDS, which are quite insightful and interesting (he’d be a real good studio analyst, for whatever that’s worth) and Buhner’s, which are dripping with enthusiasm and emotion.

Brent Musburger’s call of Martinez’s game-winning double in Game 5 is also awesome (as is the Dave Niehaus call).

But even though baseball in Seattle was saved after the 1995 season, the Mariners really never made that progression into being a consistent contender in the American League. Following the 1995 season, they made the playoffs three times in six years, but haven’t been back since 2001, the longest active Postseason drought in MLB. The franchise is one of two (along with the Washington Nationals/Montreal Expos) to never win a pennant. Attendance spiked during the first four full seasons of Safeco Field (now T-Mobile Park), but has dropped off as the team has began to fight mediocrity. As recently as 2013, their attendance fell below two million fans (a mark they exceeded just twice at the Kingdom in the pre-1995 years).

The bottom line here is that Seattle’s playoff run in 1995 actually led to something positive happening for the franchise off the field in the short and long term. In a lot of sports stories, that’s not something you see – there are a lot of talking points about “things to build on,” and then nothing happens. With the Mariners in 1995, something significant *did* happen, and without that playoff run, the franchise’s long-term viability in Seattle could have been eliminated that fall.

I think that’s why I liked this film so much. We’re not talking about hypothetical situations or theoretical outcomes – the Mariners got their new stadium deal in the middle of the ALCS. If that ALCS matchup was between the Angels and Indians instead of the Mariners and Indians, we might be talking about this franchise in a completely different city with a vastly different history. It’s pretty astounding to think about.