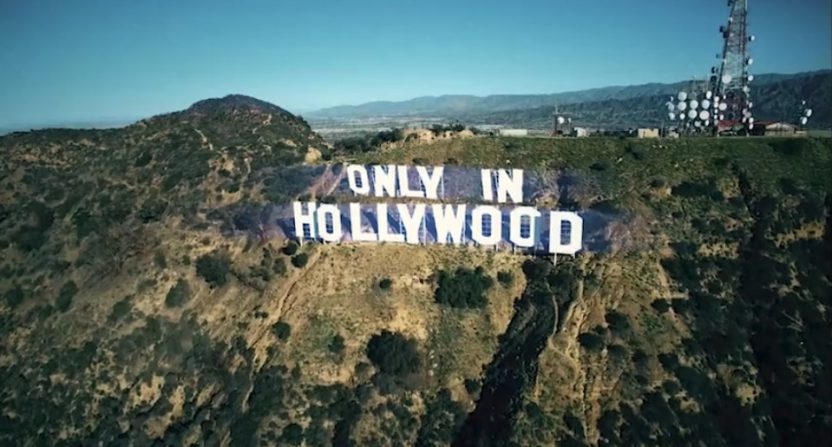 Kirk Gibson’s walk off home run in Game 1 of the 1988 World Series is one of the most famous moments in baseball (or hell, sports) history. The latest edition of the MLB Network Presents documentary series focuses on the 1988 Dodgers season, leading up to that epic home run.

Beginning with emotional behind-the-scenes footage of Gibson, Hershiser and Lasorda reuniting to celebrate Opening Day at Dodger Stadium this season, the film looks back at many of the signature moments in the Dodgers’ storybook 1988 season, most notably Gibson’s heroic walk-off home run to win Game One of the World Series against future Hall of Famer Dennis Eckersley and the heavily favored Oakland Athletics. Gibson and Costas, who was the in-game reporter for the NBC game telecast, vividly describe the events and emotions leading up to that iconic home run, which was bookended by one of the most famous broadcast calls in sports history from Scully.

Throughout the documentary, film director and longtime Dodgers fan Rob Reiner discusses how the characters and theatrics of the 1988 Dodgers season can be compared to an unforgettable Hollywood ending. Longtime Los Angeles Times columnist Bill Plaschke details the Dodgers’ next-man-up mentality and Hershiser living up to his “bulldog” nickname by throwing a record-setting 59 consecutive scoreless innings to close out the regular season. Trailing two games to one in the National League Championship Series, Scioscia recounts his game-tying home run off New York Mets ace Dwight Gooden in the ninth inning of Game Four, which catapulted the Dodgers for the rest of the series.

Coming into this film, I wasn’t sure what to expect. I was actually concerned it would *only* focus on Gibson’s home run and not the Dodgers season as a whole. It’s way more fascinating to tell the whole story, starting with Gibson’s signing with the Dodgers a month before Spring Training and leading into his tumultuous first days with the team at Dodgertown in Florida.

There are two main players in this film that get most of the focus – Gibson, and Orel Hershiser, who carried the Dodgers in the second half with an incredible 59 inning scoreless streak. Each are given top billing and plenty of attention (along with numerous quotes from both men), but plenty of other Dodgers are also featured, including Mickey Hatcher, Mike Scioscia (whose bright red Angels pullover and cap serve as a sharp contrast to the blue that dominates the rest of the film), Tommy Lasorda, and Vin Scully.

For as much as I enjoyed the first two-thirds of the film, the final third, focusing on Gibson’s home run, was where the film really shined. It glosses over most of the game until the ninth inning, and then goes into excruciating detail leading up to Gibson’s homer. Scully describes looking in the Dodgers dugout for Gibson, and Gibson recalls hearing Scully’s words and them pressing him into action taking hacks off a tee. Gibson, Scully, Bill Plaschke, and Bob Costas all describe the at bat itself and the heightening drama.

And then…dong city. You’ve all seen the clip numerous times. It doesn’t get any less dramatic. With the film providing the extra story behind the home run, it somehow becomes even *more* amazing.

Thankfully, the film doesn’t just end with Gibson’s home run. It continues to tell the tale of the rest of the 1988 World Series, with the Dodgers hobbled after Game 3 but banding together to win Game 4 and Hershiser shutting the A’s down in Game 5 to win the World Series – the last one the franchise has won.

I actually think this is one of the best editions of MLB Network Presents that the network has released. All of the key particulars (except Dennis Eckersley, for…well, probably understandable reasons) are interviewed and play key roles in the film. Gibson and Hershiser both get emotional when discussing the home run and the last 30 years, concluding with Gibson throwing out the first pitch to Hershiser on Opening Day of this season.

I’ve said it before when reviewing these MLB Network films, and I’ll say it again – there are so many great stories in baseball history that can be explored. Everyone has seen the Gibson home run, but no one has really gone this deep into the stories behind the home run. Given MLB’s incredible archive of footage, there should be no shortage of possible films in the future, and I really hope they’re all put together as well as this one.

Only in Hollywood premieres on July 15th at 8 PM ET on MLB Network.