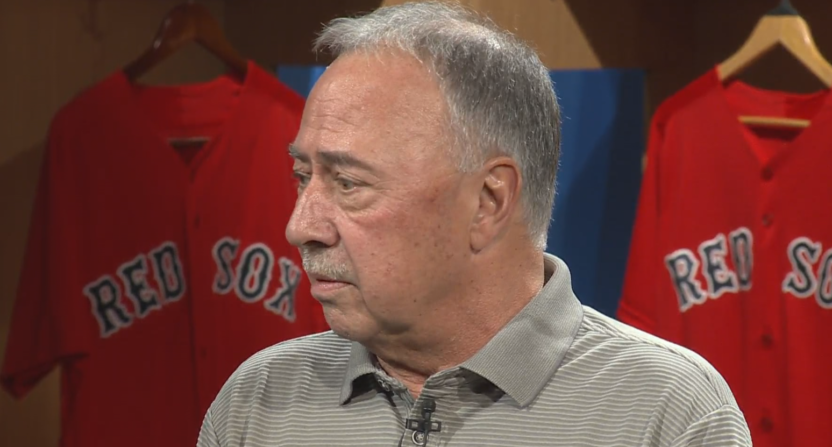 Boston Red Sox TV analyst Jerry Remy is facing another battle with cancer. Remy, who’s been NESN’s primary Red Sox color commentator since 1988, was treated for lung cancer for the fourth time during the offseason, but expected to have no limitations during the season. He tweeted Monday that he’s been diagnosed with cancer again, though:

I have been diagnosed with cancer again. Treatment starts in 2 weeks. Still strong. Please see your doctor

Back in March, Remy told MassLive.com’s Christopher Smith his offseason cancer treatment started with doctors thinking cancer had spread beyond his lungs, but eventually ended with just successful surgery on his lungs. He said he was feeling better then, but blamed a smoking habit he developed while young for his bouts with cancer.

“I didn’t feel so good about two months ago but now I’m feeling really good,” Remy said. “I’m glad to be down here and put that stuff behind me and get down in an atmosphere where I’m comfortable. And just change my mindset from what I’ve been going through for the last four months to now doing what I love to do and that’s be around baseball.”

…Remy is a longtime smoker.

“I haven’t had a smoke in a while so it’s like an alcoholic: you never say never. You take it one day at a time,” he said.

“This is the fourth time I’ve had lung cancer,” Remy added. “I joke about it but it’s no joke. And yeah, I picked up a terrible habit when I was 16 years old and was never able to stop and I’m sure that’s why I now have lung cancer.”

In February, Remy talked about the value of regular checkups and early detection, saying that was why he chose to speak publicly about his battles with cancer:

Remy’s announcement also came with an important message. The former Red Sox second baseman, who received his first cancer diagnosis in 2008, admitted his doctors’ early detection of the disease probably saved his life. He urges people of all ages to see their doctors on a regular basis, even if it’s just for a routine checkup.

“I didn’t do it because I was afraid to get bad news,” Remy said. “How crazy is that? And I finally got bad news, and I said, ‘This is dumb, not going in to see a doctor.’ People have a million reasons not to go, but I can tell you: It saves lives. That’s really why I’m here today.”

“I could have kept this under wraps and nobody would have known. But I just felt like that message hopefully would get some people’s attention, and they’ll get to their doctor. There’s no point in waiting. The longer you wait, the less chance you have of good results.”

The 64-year-old Remy has long been associated with the Red Sox, playing second base for them from 1978-84 (after starting his career with the California Angels from 1975-77) before joining the broadcast booth in 1988. He’s from Fall River, Massachusetts, and has spent most of his life in the area, and he’s become a key part of Boston’s broadcasts over the years. It’s awful to hear that he now has to face cancer yet again. Here’s wishing him and his family all the best as he prepares for treatment.