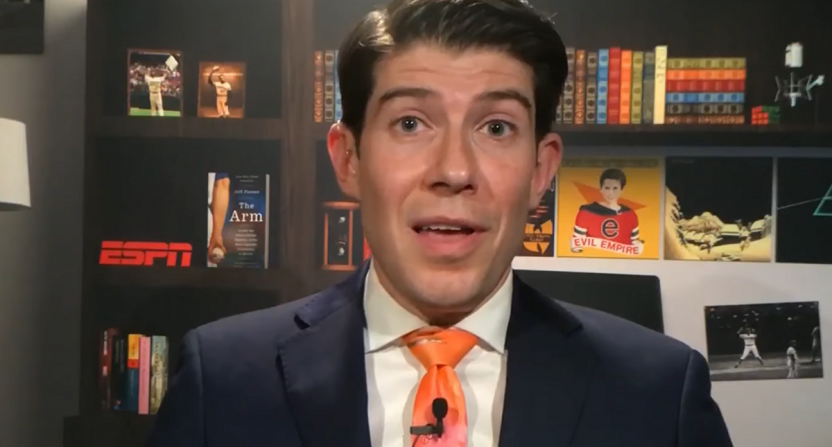 Many people dream about retiring to a remote beach on the ocean. Jeff Passan and Adrian Wojnarowski are no different, only it comes with the caveat of throwing their phone in said ocean.

Passan joined Andrew Marchand and John Ourand on their sports media podcast this week and during the interview, ESPN’s premier MLB reporter discussed the job requirement of being attached to a phone.

.@wojespn and @JeffPassan share the same dream: They both want to throw their phone into the ocean.

“I’m a slave to it. That’s the reality,” Passan said. “I look at my screen time numbers every week, and seriously I will ask myself, ‘What are you doing? Is this worthy it? What are you doing with your life?’”

“My kids are gonna be out of the house in three and seven years and I’m not present too often,” Passan continued. “I will hear them ask a question and I can’t tell you the number of times where I’ve answered, ‘hold on a second, let me finish this text.’ That may be the most oft said thing in my house. Is that how I want my kids remembering me?”

Although being a “slave” to your phone can be depressing, fielding thousands of texts and calls is the nature of being a sports reporter. If Passan isn’t at his phone to receive and break news, then Ken Rosenthal or Jon Heyman will be. Passan continues to wrestle with the question of “is this worth it?” before ultimately reaching the answer of “yes,” but the 42-year-old still looks forward to the day where he can retire from his phone.

“I’ve known Woj for a long time, and I think he is the absolute best at what we do,” Passan said. “And Woj has this fantasy where one day — I don’t know when it’s going to be — but when he’s done, he’s going to take his phone and throw it in the ocean. And, you know what? The ocean throw of the phone is a dream that I have adopted and will steal at some point.”

“What they disperse in nuggets is information, but what they have in spades is knowledge of the sport that they’re covering,” Passan said of Wojnarowski and Schefter. “They’re not just getting fed scoops. People aren’t just saying, ‘oh I need to give this to Woj.’ No, they’re building relationships. They have information that is important to people in the industry, and they have put themselves in that position by seeking knowledge about the game that they’re covering.”

That’s a glowing endorsement from Passan as he talked up some of his high-priced ESPN colleagues. The sentiment, however, also ignores Schefter seeking knowledge in the game he covers by sending $16,000 worth of chocolate around the NFL in hopes of swaying teams to send scoops his way. Is that just an example of unrivaled voraciousness, or does it push the limits of journalistic integrity?