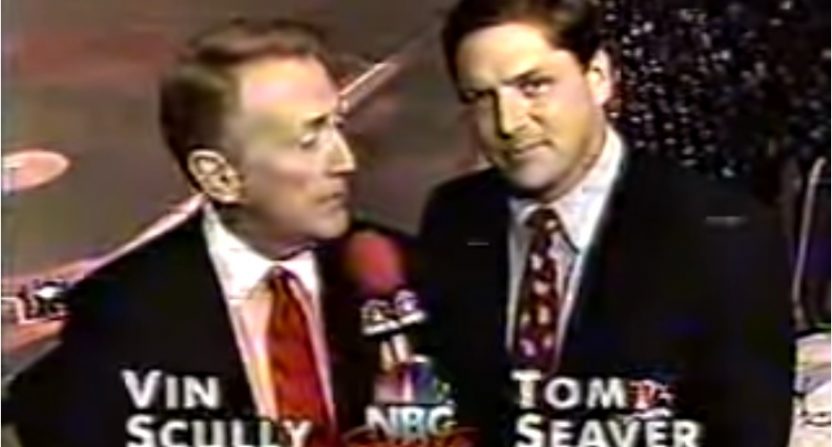 Wednesday night brought the sad news to the baseball world that Hall of Fame pitcher Tom Seaver passed away at the age of 75. The thought of an elite athlete struggling with Lewy body dementia in his later years and eventually succumbing to COVID-19 is heartbreaking to consider.

Yet such tragedy also presents an opportunity to celebrate someone’s life and his or her achievements. In Seaver’s case, those achievements are vast. He was “Tom Terrific.” He was “The Franchise.”

The legendary right-hander won 311 games during his 20-year MLB career, striking out 200 batters or more in 10 of those seasons. His 3,640 strikeouts rank sixth all-time in major league history. In 12 years with the New York Mets, Seaver won three National League Cy Young Awards and twice finished as the runner-up. His resume also includes a no-hitter in 1978 while pitching for the Cincinnati Reds.

While still playing, Seaver also worked as a broadcaster, calling postseason games for NBC and ABC. In addition to broadcasting the 1981 NLDS and NLCS, he called four World Series from 1977 to 1982. So it wasn’t a surprise when he became a full-time broadcaster following his retirement after the 1986 season. That’s likely how later generations of baseball fans remember him.

In addition to providing analysis alongside Vin Scully for NBC’s “Game of the Week,” Seaver was also a color commentator on New York Yankees and New York Mets broadcasts. He was one of only three broadcasters who regularly covered both New York baseball teams (along with Fran Healy and Tim McCarver).

Seaver also worked with Dick Enberg at NBC. Before Enberg was set to be presented with the Ford C. Frick Award at the Baseball Hall of Fame, Seaver gave Enberg the news that San Diego mayor Faulconer had declared that Saturday — July 25, 2015 — Dick Enberg Day in the city.

“‘He grew exponentially over time into a very good broadcaster,’ John J. Filippelli, president/production of the YES network who worked closely with Seaver when he was the coordinating producer of NBC’s MLB “Game of the Week,’ said Wednesday night. ‘Tom applied the same dedication he had for baseball to broadcasting. He had a desire to learn and that served him well. He didn’t want to be second best at anything.'”

Seaver retired from broadcasting in 2005, moving back to California with his wife to run a vineyard. As Filippelli explained to Raissman, Seaver didn’t enjoy being famous and the attention that came with it. But his accomplishments were simply too great to ignore, too impressive for fans not to express joy at witnessing.