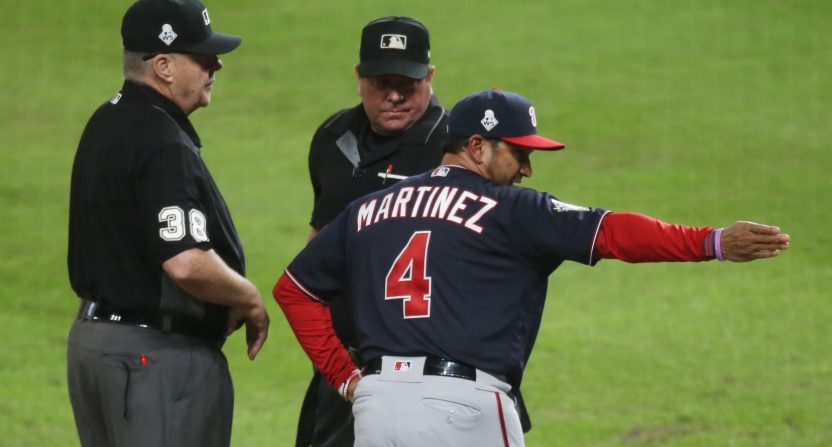 The controversial runner interference call in Game 6 of the World Series turned out not to be a pivotal moment in the series.

The Washington Nationals didn’t lose because of the seventh-inning call, in which home plate umpire Sam Holbrook ruled the Nats’ Trea Turner out at first base on a groundball. But at the time, it looked as if the Nationals could have their season end on a bad call that most viewers believed never should have been made.

According to Holbrook, Turner ran within the foul line and prevented Houston Astros first baseman Yuli Gurriel from catching the throw to the bag. Depending on your view or rooting interests, Holbrook either made the correct call (strictly going by the rulebook) or misapplied the rule (failing to consider the stakes or how the play eventually progressed).

Trea Turner was called out on this play.

But those watching the World Series broadcast on Fox weren’t provided with any clarity on the rule itself, nor any insight as to how Holbrook applied it. The announcing duo of Joe Buck and John Smoltz, along with reporters Ken Rosenthal and Tom Verducci, did their best to explain what was happening but weren’t well-versed enough in the rulebook to help the audience understand. Viewers largely had to get that interpretation from Twitter.

That sort of explanation is something viewers now get with regularity on NFL and college football telecasts. Former referees such as Mike Pereira, Dean Blandino, John Parry, and Matt Austin are either in the broadcast booth or watching from a studio, ready to be utilized when a questionable call occurs. And the lack of it during a World Series telecast — or any telecast during the 2019 MLB postseason — felt especially notable when other sports now receive that benefit.

MLB’s TV partners also noticed and could make changes for next year’s postseason coverage. For his latest Media Circus column, The Athletic’s Richard Deitsch talked to Fox Sports executive producer Brad Zager to address the issue. Zager said that Fox has been talking to some former umpires about such a role, but a rules analyst likely wouldn’t be utilized as often on a baseball broadcast as with football. Most calls are rather straight-forward, sometimes with the help of replay, and on-screen graphics already show viewers view the strike zone as laid out by the rulebook.

Yet just as MLB adds additional umpires during the postseason to cover more angles, shouldn’t Fox, Turner or ESPN have a rules expert on hand for the occasions when controversial calls are made? Sure, there’s the possibility that such an analyst won’t be needed. But that could always be the case. When the audience is larger, the focus more narrow, and the stakes at their highest, scrutiny is at a peak and TV broadcasts should accommodate that.

Check out Deitsch’s column for more from Zager on some of the obstacles Fox faces in implementing an umpires analyst. The decision might not be quite so easy.