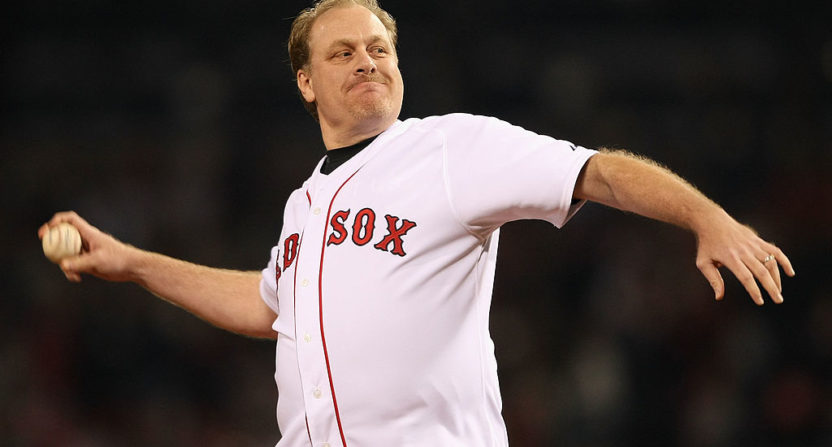 For the ninth time in history, the Baseball Writers’ Association of America Hall of Fame balloting ended with no candidate receiving the 75 percent threshold required for induction, as revealed on MLB Network Tuesday evening. The top three candidates in that balloting were Curt Schilling at 71.1 percent (16 votes short of induction), Barry Bonds at 61.8 percent and Roger Clemens at 61.6 percent, all of whom would normally be going into their 10th and final year of BBWAA eligibility next season (and then would have to rely on veterans’ committees if they didn’t attain that). But Schilling posted a letter that he wrote to the Hall of Fame on his public Facebook page Tuesday, and in that long letter (which is largely him ranting about the criticisms he’s taken for remarks about trans people, remarks about Muslims and Nazis, remarks on journalists and lynching, remarks on the storming of the U.S. Capitol, and more), he mentions that he doesn’t want to be considered by the BBWAA next year, but does want to be considered by veterans’ committees:

I can say at this point I am mentally done. I know math and I know trends and I know I will not attain the 75% threshold for induction.

As I’ve stated often over the past years to those I’ve spoken with in my heart I am at peace. Nothing, zero, none of the claims being made by any of the writers hold merit. In my 22 years playing professional baseball in the most culturally diverse locker rooms in sports I’ve never said or acted in any capacity other than being a good teammate.

…I wanted to reiterate this final point. I will not participate in the final year of voting. I am requesting to be removed from the ballot. I’ll defer to the veterans committee and men whose opinions actually matter and who are in a position to actually judge a player. I don’t think I’m a hall of famer as I’ve often stated but if former players think I am then I’ll accept that with honor.

It’s certainly interesting that Schilling is seeking to remove himself from BBWAA consideration. Many times in the past, people who have hit the vote level he did here have received induction in their final year. However, there are perhaps some extra factors in his case, especially with the remarkable story last week from Matt Spiegel of 670 The Score in Chicago that “numerous” BBWAA voters had tried to amend their ballots after Schilling’s social media posts about the storming of the Capitol:

Source: Numerous National Baseball HOF voters have reached out to the Hall hoping to amend their ballots, removing their votes for Curt Schilling after he supported the seditious acts in Washington D.C. 2 weeks ago. HOF officials are concerned about the precedent this could set.

Here’s one of those tweets, for reference:

You cowards sat on your hands, did nothing while liberal trash looted rioted and burned for air Jordan’s and big screens, sit back, stfu, and watch folks start a confrontation for shit that matters like rights, democracy and the end of govt corruption. #itshappening

So it is possible that Schilling would not have received the vote bump needed for induction in his final year, and it’s possible that his numbers might even have dropped if some of those who had looked to amend ballots this year decided not to vote for him next year. If this post does actually see him removed from the BBWAA ballot, we’ll never know if he would have gotten in that way or not. But with Schilling’s remarks about being willing to accept induction from a veterans’ committee, it seems unlikely that this will permanently end the debate about him and the Hall of Fame.