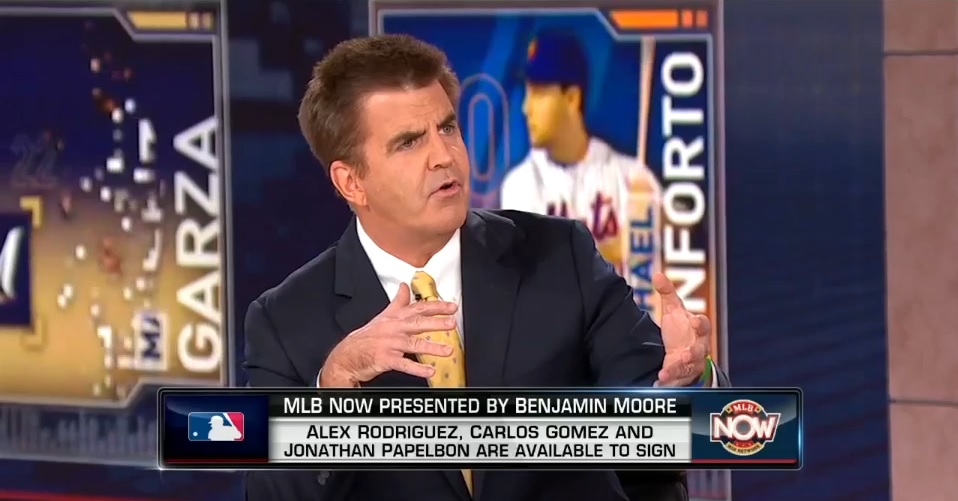 Friday proved to be quite a busy day for MLB Network’s Brian Kenny. The network announced Thursday that Kenny would be headlining their Baseball Hall of Fame induction coverage early next week, and that he’d be hosting MLB Now live from the National Baseball Hall of Fame and Museum in Cooperstown (for the first time ever) on Monday, Jan. 25. But on Friday, instead of just preparing for that, Kenny (seen above on the network in 2016) was tagged in to host the network’s special coverage of the passing of legendary star Henry “Hank” Aaron. He spoke to AA shortly after finishing his coverage shift Friday afternoon, and said he appreciated getting the chance to discuss how much Aaron meant to baseball.

“You do feel a responsibility, I know I do, to try and tell a younger audience who this man was. And I think people of my generation take for granted that this was one of the biggest stars in the country, he was an icon. And you try to pass that on to those who didn’t have the benefit of living through those times.”

As for the Hall of Fame-originated coverage next week, Kenny said that’s going to be special for him given his long history with the Baseball Hall of Fame and Museum.

“I’m always thrilled to go to Cooperstown. I’ve been going my whole life. And now, to be able to be part of the coverage, making the announcement with the president of the Hall of Fame, I’m so excited about it.”

“I’ve been going there since I was a little kid. My oldest daughter got married there at The Otesaga. My wife and I have actually been going there for the past 30 years; our anniversary is in the winter, and it’s been a big family event for decades, going there. I’ve really always loved the history of baseball and going to Cooperstown. They go hand in hand.”

Kenny said there is going to a somewhat-reflective tone to those broadcasts, though, considering how many Hall of Famers have passed away in the last year-plus.

“It is sobering just to think about the losses that we’ve had; I think it’s 10 Hall of Famers now in 13 months, and a lot of the people we’re talking about are the players, the men I saw through the years in Cooperstown. And that’s a Hall of Fame fraternity. And I start to remember the conversations I’ve had with Hank Aaron, and Lou Brock, and Tom Seaver, and Johnny Bench, talking about base-stealing. And you think ‘Wow, Seaver is gone, and Lou Brock passed away.'”

“It’s sobering; it does make you appreciate the place a little bit more, because I think that is what the Hall of Fame is for, to help us remember what was so important to us. It’s a place where you stop and you focus on players you grew up watching, someone that meant something to you as a fan, someone that meant something to the country as an icon, like Hank Aaron. It’s a place to kind of store your memories. That’s part of the allure of the Hall of Fame, and I think that’s what we’re going to try to do this weekend, look towards the new coming in. Derek Jeter is about to begin, and maybe there will be someone new voted in on Tuesday, while also remembering the big number of icons, national icons that we’ve just lost.”

As for originating broadcasts from Cooperstown, Kenny said he thinks those will be notable given the importance of the BBHOF and what it’s meant over the years.

“If you’ve ever been there, you know it’s a special place. It feels different when you go to Cooperstown. It feels like baseball. And the history of the game, whether or not you’re totally buying into the creation myth of Cooperstown or that just since 1939, the all-time greats of baseball have gathered there. So it has its own history of baseball, and it is the village that represents so much of rural America, and still looks like it and feels like it and is it. And it’s special to be there; the Baseball Hall of Fame is a special place, and Cooperstown is a special place, and you do feel the spirit of baseball there. So I do think it will add to something. It’s different than being in a studio, being physically there.”

Kenny said a broadcast from Cooperstown also has the advantage of showing the BBHOF off to those who haven’t yet been able to see it in person.

“Not everybody gets to go to the Hall of Fame, so we’re going to try to show some of the things that are there. It is kind of a living museum; there are things that are constantly updated. And I think it’s not just going and showing the plaques where players are immortalized, but going and showing the Hank Aaron exhibit that is there, and the modern exhibit that they’ve put together that’s more about baseball culture. It’s not just players’ uniforms and cleats from the games; Ball Four is there, and things from Bull Durham and Major League, how we all take in baseball, how it’s part of our universe.”

“And I think the museum does a marvelous job of that, and it’s a must-see for a baseball fan, but not everybody gets to go and see it. So we’re going to try and take a bit of a tour around and show people what’s there and how it really does rekindle your love of the game.”

MLBN will have Kenny hosting “MLB Now” live from the Hall of Fame for the first time ever Monday, beginning at 2 p.m. ET. On Tuesday, the network’s coverage (anchored by Kenny, Greg Amsinger, and Lauren Shehadi), will include a four-hour announcement show beginning at 3 p.m. ET.