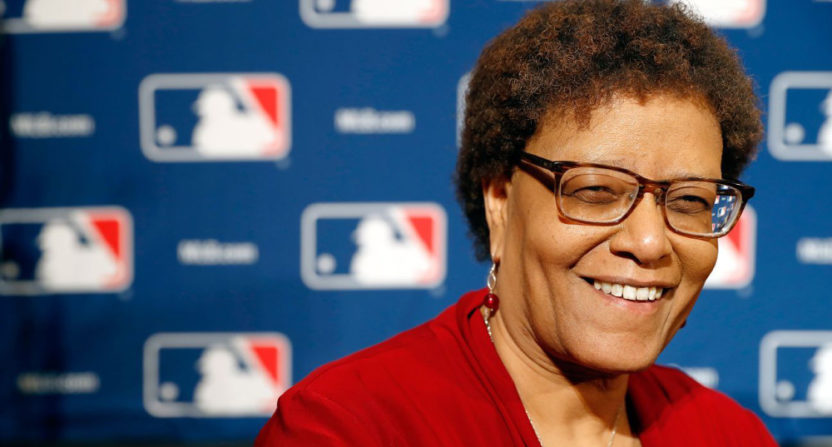 ESPN baseball coordinating editor Claire Smith will be honored with the Baseball Hall of Fame’s J.G. Taylor Spink Award Saturday for her “meritorious contributions to baseball writing,” the first woman to receive that prestigious award and only the second woman ever honored individually by the institution. The first was Effa Manley, the owner of the Negro League’s Newark Stars, who was inducted posthumously in 2006 (and was a Philadelphia native, like Smith). It’s a deserving honor for Smith, one that comes after she persevered through numerous challenges.

It wasn’t an easy road for Smith, who left her first paper when they wouldn’t let her cover sports because of her gender and faced resistance covering baseball on multiple occasions, most notably when members of the San Diego Padres physically pushed her out of their clubhouse in 1984 during the National League Championship Series (which sparked other players to defend her, and eventually caused MLB commissioner Peter Ueberroth to mandate clubhouse access for anyone with a credential). However, Smith has long insisted that the challenges in front of her were nothing next to what her parents faced, and what other trailblazers like Jackie Robinson faced. She gave a powerful speech to that effect when honored by the Jackie Robinson Foundation in March, and continued the theme recently when she spoke to Bob Brookover of The Philadelphia Inquirer about her career covering baseball and other sports. She told Brookover those she looked up to like her parents, Robinson, Manley and Larry Doby had it much worse than she did, and she praised her mother’s love of Robinson in particular for getting her into baseball.

It was her mother, a child of Jamaican immigrants, who steered her toward the game.

“She was a die-hard Dodgers fan and that had everything to do with Jackie Robinson,” Smith said. “When I was in third grade at St. James in Elkins Park, the nuns took us to the church basement and showed us The Jackie Robinson Story starring Ruby Dee and Jackie Robinson and I fell in love. I could put a voice and a face to the name and the legend my mother was always talking about. Watching him run with that pigeon-toed gait and listening to him talk … after that I always loved Jackie Robinson.”

Smith said she always felt the barriers in her way were nothing compared to those faced by her role models, and that was especially true for her parents:

What she also had, however, was a sense that the obstacles she faced as a female baseball writer were low when compared with the stories told to her by her mother and father.

“My mom told me she rode on a train to see her sister in Fayetteville, N.C., and German soldiers that were prisoners got access to the café car that African American soldiers on the train did not get. These folks loved a country that did not love them back. When I think of things like that, it made me say, ‘Who am I to complain?’ What I went through doesn’t even compare. My dad grew up in a segregated Maryland and his grandfather was a slave. I got chased out of a locker room. My mom got chased out of department stores while being called vile names.”

Smith also spoke to Brookover about some memorable moments from her time in journalism, including how her first baseball story (on Pete Rose breaking Stan Musial’s National League hits record) landed on the front of the Philadelphia Bulletin after she wasn’t even sure it would make it in, and how her torturous interview with an exhausted Phil Niekro led to a piece that was nominated for a Pulitzer. But it’s perhaps particularly impressive that Smith managed to survive and thrive in baseball despite all the opposition she faced over the years, for both her gender and her race. And these comments from her provide some interesting insight into just how she did it.