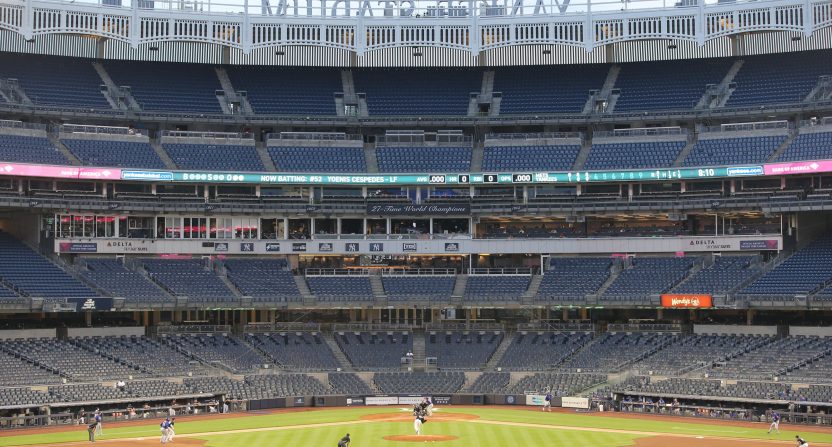 The year 2020 has been unlike any other in all facets of life, including the Major League Baseball season, which finally begins Thursday. While things may be vastly different for players, whose teams will play only opponents within their geographic divisions and will adopt the universal DH, it will also be a big adjustment for the men and women who broadcast the games.

Awful Announcing spoke at length with five regional announcers and one national play-by-play broadcaster to discuss how crazy this season will be, how their jobs will be impacted in so many ways, and whether it’s truly safe to play baseball outside a bubble during this coronavirus pandemic.

July has been quite the interesting and unstable month for the Toronto Blue Jays, who over the weekend were denied permission to play at Rogers Centre and now search for a temporary ballpark just a week before their home opener after also being denied the chance to play at Pittsburgh’s PNC Park.

Longtime play-by-play man Buck Martinez flew from his Florida home to Toronto on July 7 for a two-week quarantine in preparation for the season. Martinez has called Jays games since 2010 for Rogers Sportsnet, and the original plan was to call all home games inside the Rogers Centre booth and all road games from the studio.

“Broadcasters will probably have to do production meetings on Zoom or certainly at a social distancing requirement,” the 71-year-old Martinez said.

Martinez said his longtime broadcast partner Pat Tabler lives across the border in the U.S., and because of tight restrictions, will be limited to pregame, postgame and some reporting and commentary. Martinez will be paired with Canadian resident Dan Shulman for all 60 games, forming one of the best booths in baseball and maintaining the consistency in how games are delivered. The Jays and their fans will probably take any consistency they can get at this point.

But Martinez’s issues are nothing compared with what a couple of MLB broadcasters face as we hit Opening Day. Atlanta Braves analyst Jeff Francouer and Houston Astros play-by-play man Todd Kalas both tested positive for COVID-19 this week. Kalas’ analyst Geoff Blum is one of the people we spoke with for the piece, and said that he’s tested negative twice for the virus since and is doing fine. Kalas reportedly said he’s asymptomatic and is resting at home, and will be replaced to begin the season by Astros studio host Kevin Eschenfelder.

No MLB broadcaster is going to travel in 2020 for health and safety concerns, and it’s definitely for the best, given not only the nature of the pandemic and the virus, but because of the potential of broadcaster positives coming in pairs. Of course, most announcers are disappointed by being unable to travel, but NESN analyst and Hall of Famer Dennis Eckersley is not one of those people.

“First of all, I hated traveling anyway so I don’t miss that. I’m too old,” the 65-year-old Red Sox broadcaster said. “I’ve had enough of that in my life.”

Speaking from his home in California a couple weeks back, Eckersley was anxious to get the season underway because everything in baseball and life seems so tentative and uncertain. Though he has no underlying health issues, NESN’s Jerry Remy does. And so Eckersley, Remy, and Dave O’Brien will call Boston’s games from the network’s suburban studios and, like Red Sox fans, will be away from Fenway Park all season.

Teams are going to be calling games in a variety of ways. Some teams like Boston and Toronto will be calling all their games remotely. Others like Houston will call home games inside their home ballpark and road games from a studio. Kansas City and Washington, among others, will call all games from their home booths, even without fans in attendance.

“I’m just as eager as anybody else to see what this is gonna look like,” said Ryan Lefebvre, the Royals play-by-play announcer for Fox Sports Kansas City.

Things are going to look a lot different as well with ESPN’s national telecasts, most notably Sunday Night Baseball. Matt Vasgersian and Alex Rodriguez will be calling games from the studio in Bristol, while Buster Olney will spend time either at ballparks or reporting from home.

“I’m hopeful that we get as much Buster as can be humanly allowed,” Vasgersian said.

Vasgersian, 52, has experience calling games off a monitor at five Olympic games for NBC, most recently the 2014 winter games in Sochi. In 2008, he was calling games for the San Diego Padres when they had a spring exhibition series in Beijing that he called remotely from California. All announcers who are going to be calling sports this summer, Vasgersian said, have to plan for things to inevitably go wrong.

“There’s gonna be some failure, for sure,” he said. “This is the wild, wild west.”

Among the many, many changes broadcast teams are going to have to adjust to is a decrease of control in their camera setups for road games. ESPN will try to have as many of its cameras at ballpark locations as possible, especially for Sunday Night Baseball, but that may not be possible for all their weekday regional broadcasts.

Over the years calling the Olympics, Vasgersian got used to describing the action in ski jumping or freestyle skiing from a World Feed.

“You could see the event happening in real time,” he said, “but you really had to limit your commentary to what the viewer could see with the World Feed director and the choices he was making.”

MLB is trying to get at least a couple of cameras set up in each ballpark specifically for away team use, but it’ll produce an outcome that’s far from ideal. That’s something Blum has thought about a lot.

“Calling games for a team like the Astros, who are very analytical and rely on defensive shifts, that’s where I watch the field quite a bit before the pitch is thrown or before a hitter comes to the plate,” Blum, 47, said. “And I wanna make sure they allow us the opportunity, because we need to know where these guys are shifting, where positioning is.”

Martinez confirmed that the Blue Jays will have two dedicated cameras for when they’re on the road, but it’ll be interesting to see what Rogers will do with its setup wherever the team plays its home games.

“You really have to watch the monitor,” he said, “because the home team’s director is going to be cutting his game.”

There are just so many things, Blum said, broadcasters take for granted by being at the ballpark every day and having every camera angle and replay they want. Play-by-play announcers need to determine if a ball hit is going to be a home run or just a deep fly ball. Does a runner have a good chance to tag and score from third base on a flyout? Is the trail runner going to make it to second base? So much of his information can be delineated just by watching mannerisms in between innings, Blum said.

“Those aren’t necessarily things you see on an everyday broadcast until you go back to the replay,” he said. “And I think that’s where a lot of our concern is.”

John Flaherty is a Yankees game analyst and pre and postgame show analyst for YES Network and a former big league catcher. Much of his focus and expertise deals with the daily nuanced interactions between pitchers and catchers.

“I want to see what pitch was thrown,” he said, “but we all probably have the same attitude, that it’s gonna be different.”

“When I really think about it, my nose is in that monitor,” Eckersley said. “Pitch to pitch, that’s what it’s about, especially the location and what the guy threw.”

Eckersley hopes that the directors will still be able to pan dugouts when the Red Sox are on the road, but he’s more concerned about O’Brien, who he said really runs the show.

“We’re playing off him anyway,” Eckersley said. “As long as he’s comfortable.”

As Blum said, there’s probably going to be a lot of coordination between teams’ technical crews for the road camera feeds, and it’ll take time for those groups to adjust to working with one another.

“I would imagine even if we think we’ve got it figured out,” he said, “there may be a whole series of issues that pop up later that we didn’t think of.”