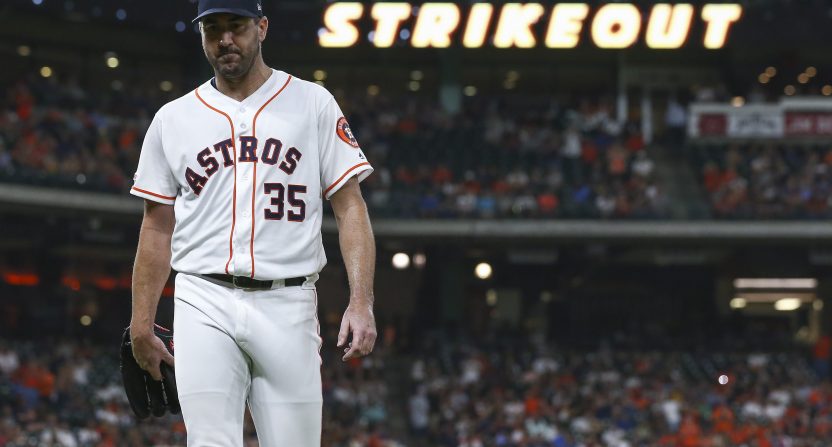 Justin Verlander and the Houston Astros are under fire on Thursday morning after the team reportedly barred a Detroit Free Press reporter from entering the clubhouse after Houston’s 2-1 loss to the Detroit Tigers on Wednesday night. Verlander was the one who made the request to prevent Free Press reporter Anthony Fenech from entering the clubhouse, and said he wouldn’t talk to any members of the media if Fenech was present.

Here’s a brief summary of the incident, per the Free Press.

The Astros blocked Free Press writer Anthony Fenech at Verlander’s request, according to Gene Dias, Astros vice president of communications. Dias said Verlander was “adamant” that he would not speak to any credentialed media while Fenech was present.

Fenech has been the Tigers beat writer for the Free Press since 2015.

Verlander pitched a complete game Wednesday in Houston, allowing two home runs in a 2-1 loss to the Tigers. The game ended at 9:22 p.m.

At 9:35 p.m., the Astros opened their clubhouse to credentialed media in coordination with MLB rules. As other media members entered the clubhouse, Fenech, who has a BBWAA-issued credential, was blocked from entering by three Astros security officials.

This is troubling for several reasons, most notably because it violates several chunks of baseball’s collective bargaining agreement, specifically the parts regarding media relations.

Again, per the Free Press.

Preventing media access runs countercurrent to the mission of the BBWAA, which was established in 1908 to “ensure proper working conditions in press boxes and clubhouses, and to ensure its members have access to players and others in the game so members’ reporting can be accurate, fair and complete.”

In addition, preventing a reporter from entering the clubhouse on time could violate Section 2 of the Regular Season Club/Media Relations Guidelines in the collective bargaining agreement, which gives working media access to both clubhouses “no later than 10 minutes following the final out of each game.” In Wednesday’s case, the Free Press was admitted 19 minutes after the game ended and six minutes later than other credentialed media.

Also, Section 6 of the guidelines requires players to be “available to the media before and after games for interviews.” It wasn’t immediately clear whether the Astros’ decision to delay Fenech’s access to Verlander would violate the rule.

Fenech has been the Tigers beat writer for the Free Press since 2015. Verlander was with the Tigers from the time he was drafted second overall in 2004 through August of 2017, when he was traded to the Astros. It’s reasonable to assume that there may have been a grudge still festering from their overlapping time in Detroit.

Verlander tweeted out an explanation on Thursday morning, claiming Fenech had displayed “unethical behavior” in the past and that he had urged the Free Press to assign another reporter to cover the game.

I declined to speak with the @freep rep last night because of his unethical behavior in the past. I reached out to the @freep multiple times before the game to notify them why and to give them an opportunity to have someone else there. Ironically they didn’t answer.

Although I tried to avoid this situation altogether, I’ve still reached out to @freep multiple times today with no response. They’re still not interested in my side of the story.

Chris Thomas, the sports editor for the Free Press, responded to Verlander and claimed that he nor Fenech had been contacted.

Hey, @JustinVerlander: I would like to know who you have contacted @freep about telling your side of the story. My reporter has not heard from you directly, nor have I.
My email is listed on the article we published last night.

I am more than happy to speak with you about it. https://t.co/vAbN86rNfY

MLB also released a statement (via MLB Network’s Jon Heyman) confirming that Fenech should have been allowed to enter the clubhouse, also stating the league had contacted the Astros.

Regarding Detroit Free Press reporter Anthony Fenech, the MLB statement: “Per our Club-Media Regulations, the reporter should have been allowed to enter the clubhouse postgame at the same time as the other members of the media. We have communicated this to the Astros.”

Update: The Astros and the BBWAA have both put out statements now.

The @Astros have released a statement pic.twitter.com/LBFeAXdZOe

The issue here isn’t Verlander not talking to Fenech. That’s an issue that pops up all the time between reporters and players (SEE: David Price vs the Boston media). The issue is Verlander asking the Astros to bar Fenech from the clubhouse while he was talking to the media, which is a big no no under the CBA.

One has to assume that this issue is going to consume far too much time for Verlander, the Astros, and the Detroit Free Press on Thursday, and that Verlander’s tweets explaining his reasoning aren’t the end of the story.