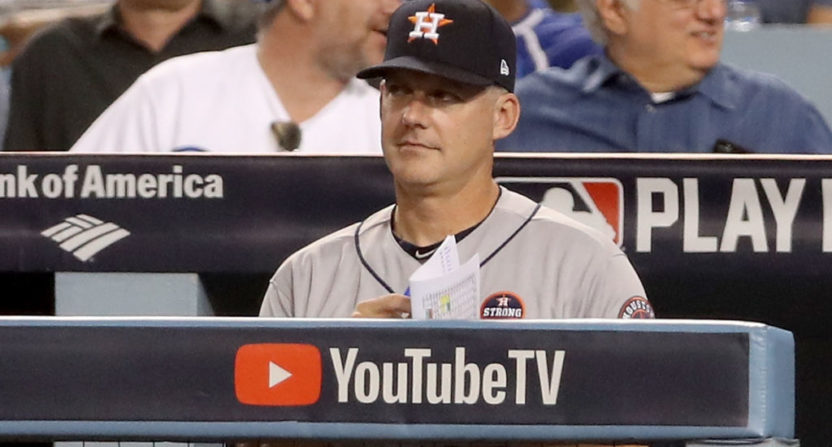 It looks like Houston Astros’ manager A.J. Hinch is not a fan of TMZ. After the Astros came up with a bizarre 7-6 extra-innings win in Game 2 of the World Series Wednesday night, an odd story emerged from TMZ Thursday, saying that Hinch was involved in a “bar altercation” at the team hotel following Tuesday’s Game 1. After the teams traveled to Houston ahead of Game 3, media asked Hinch about this, and he responded with plenty of shots at TMZ:

A.J.Hinch on TMZ story: “There was no altercation. It’s a shame I get asked about nonsense & fabrication &have to respond on national stage.

Hinch said "no altercation." He said it's "ridiculous."

But what did TMZ actually report? Here’s the key part of their story:

Here’s what we know … Hinch was hanging out at the bar at the team hotel in Pasadena on Tuesday night after Houston lost Game 1 to the Dodgers.
We’re told he was having some drinks — when some hotel guests came in and started talking trash about the Astros.

Sources say Hinch “snapped” and unleashed on the other patrons — cursing and yelling in the middle of the bar. One witness tells us the incident turned physical and cops were called to separate the two parties.

We spoke with Pasadena PD and we were told they responded to the hotel at 10:30 PM to help security “keep the peace” during an incident involving Houston Astros “team management.”

We’re told no arrests were made and no report was taken — both sides ended up walking away.

And here’s Joel Sherman of The New York Post with Hinch’s side (via another source who spoke to Hinch):

1/Person who spoke to Hinch about TMZ report of bar altercation in LA after G1 said: No altercation. Rude people at bar cursing and being

So, the dispute here appears mostly over what “altercation” means. Even the Astros’ side involves cursing and yelling, but from the other parties involved. The TMZ version is much more unfavorable to Hinch, saying he “snapped” and was cursing and yelling and that the event turned physical. (And their “astros-a-j-hinch-hotel-bar-fight-police” URL is inflammatory, too.) And it is perhaps notable that the Pasadena police said there wasn’t a fight when they arrived:

“There was no fight that we were separating when we got there,” Pasadena Lt. Tracey Ibarra said.

In any case, if the Hinch/Astros version is correct, this isn’t really a big deal, and he’s probably right to be upset at TMZ for the way they reported it. (And this probably isn’t something he wanted to deal with during the World Series.) If his story’s right and the TMZ version is a “fabrication,” Hinch is justifiably mad at TMZ for trying to turn a minor incident instigated by others into a scandal. But if the TMZ version has any merit, there are a few more questions for Hinch and the Astros. We’ll see where it goes from here.