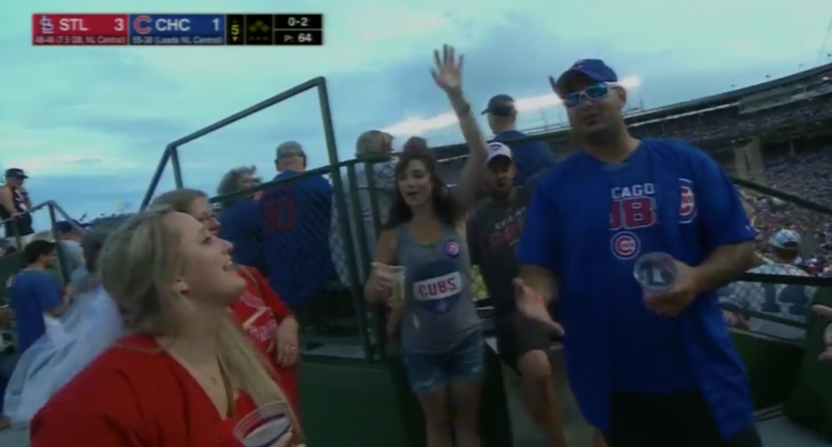 The second half of the 2018 Major League Baseball season got underway on Thursday. ESPN welcomed fans back by broadcasting a classic matchup between the St. Louis Cardinals and Chicago Cubs at Wrigley Field. Excitement was in the air, the weather was great, and Matt Vasgersian, Jessica Mendoza, and Alex Rodriguez were calling the action from above when the camera cut from the game to a bachelorette party celebrating in the bleachers.

You’ve heard of the unwritten rules of baseball, but did you know that having a bachelorette party at the ballpark is prohibited among them? At least, according to Vasgersian, who was not a fan. Via TMZ:

Vasgersian: Is there anything more obnoxious than the bachelorette party at the ballpark, by the way?

Mendoza: Why is it obnoxious?

Vasgersian: Congratulations, by the way, yeah, we’re all very happy for you, la la la la.

Mendoza: Why is that obnoxious?

Vasgersian: It’s such a “look at me thing.” You’re sitting behind like the bridal party–”Like, oh my god! We’re getting married! Ehhhhh.”

We’re thinking Matt might need to work something out in a therapy session or something because that’s a lot of pent-up disgust over a group of female fans enjoying themselves at a baseball game. Of all the types of obnoxious people you’ll come across in the stands during the game, and you will come across many of them, bachelorette party attendees seem fairly tame.

As you might imagine, there was a bit of a reaction to Vasgersian’s comments on Twitter Thursday evening.

Matt Vasgersian's little sexist rant on ESPN just inspired me to have my bachelorette party at @Angels stadium.

Can someone tell me why Matt Vasgersian doesn’t think bachelorette parties should be able to attend baseball games? Did I miss when only men are allowed to enjoy baseball games? @espn

Nobody tell Matt Vasgersian but we reserved a table for a bachelorette party headed to Wrigley today. #NiseiCares pic.twitter.com/bzGjfzldRh

To be fair, some people did side with Vasgersian as well, and you’ll probably be able to guess which kinds of people that included.

I agree with Matt Vasgersian. Bachelorette parties are obnoxious anywhere they go, let alone a ballpark.

Not to say that bachelor parties are any different, but having lived in Nashville past 5 years, seeing it become bachelorette capital of USA has created my annoyance of them

While we can brush the comment off as a regrettable remark, it does speak to a larger issue for baseball in general. It calls to mind the time the time MLB.com announcers mocked a group of sorority girls attending an Arizona Diamondbacks game in 2015. The pair made fun of the groups’ selfies and chastised them for ignoring fans around them. While the criticism was brushed off by some, others noted that MLB should be celebrating the fact that a large group of young women chose to spend the night at the ballpark, spending money and sharing photos. In other words, these are exactly the kind of people you should want feeling comfortable in the stadium.

Credit to Jessica Mendoza for defending the women in the bachelorette party, who, like the sorority girls, made a conscious choice to come out to the ballpark on Thursday night, spend their money on the sport, and enjoy the atmosphere. Hopefully chiding by people like Vasgersian won’t keep them from returning. Lord knows baseball needs all the fans it can get.