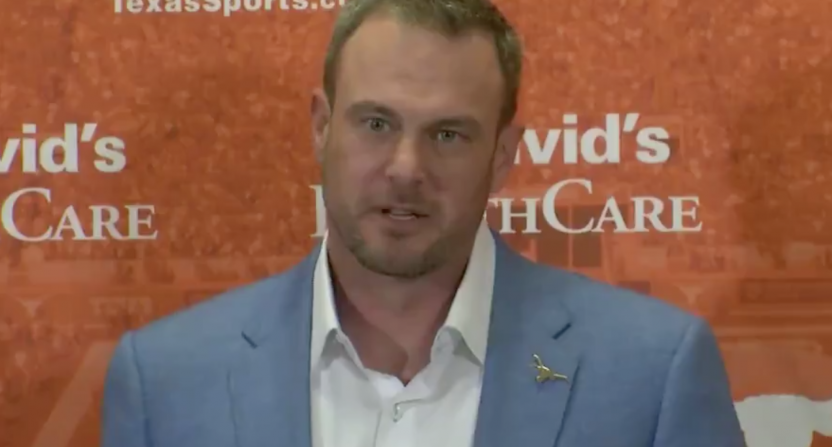 Wednesday was a big day for college football coaches as programs could begin officially signing recruits to letters of intent. The University of Texas gets a significant spotlight for such an occasion, thanks to the Longhorn Network operated by ESPN.Unfortunately, one of the first images Longhorn Network viewers saw as coverage of the early signing period kicked off was head coach Tom Herman giving two middle fingers to a camera filming the coaches’ conference room. Though it was definitely entertaining, that’s not exactly the first thing a program and coaching staff wants an audience tuning in for hopefully good news about its favorite college football team.Check out the clip here:https://twitter.com/dolphlong/status/1207304977988964352No, it’s not like Herman moved closer to the camera to give an obscene gesture to the audience. (Although as you can see in the clip, someone else in the room was quite aware that the camera was there.) The coach just chose the wrong angle to make his gesture as he was apparently telling a story. And maybe he didn’t realize that the camera was broadcasting live at that moment.As a result, Herman felt he needed to begin his national signing day press conference with an apology for what was caught on camera.https://twitter.com/TravisRecek/status/1207427613968551936“I do want to apologize for something that ended up on live TV this morning,” said Herman. “We were joking, quite frankly, about my first experience riding into the Cotton Bowl [Stadium] on the bus and the warm welcome you receive in the Red River game [versus Oklahoma].”Herman added that he had no idea the camera was live and said his gesture had nothing to do with Longhorn Network, signing day, or any other interpretation that may have been made about those twin middle fingers. But he also acknowledged that it wasn’t a good look for a head coach and leader of a nationally recognized football program on television. (And it doesn’t help that Herman is facing increasing pressure going into his fourth season in Austin.)Surely, no one thought that Herman was actually giving any sort of commentary on camera in such a fashion. No public figure representing a university, especially one in as prominent a position as head football coach at the University of Texas, would think that was acceptable. It was just bad timing for Herman, being caught at the wrong time in a moment of poor judgment. (If a camera is in the room, chances are there won’t be any private moments, Coach!)Depending on whose rankings you choose to follow, Texas had a good, but not great early national signing day. ESPN placed the Longhorns’ class No. 10 in the nation, while CBS Sports ranked Texas No. 9 and 247Sports put Herman’s group at No. 11. Rivals was much less kind, putting Texas at No. 21 in its rankings. But Herman’s gesture was given long before those Rivals rankings were published.[ESPN]