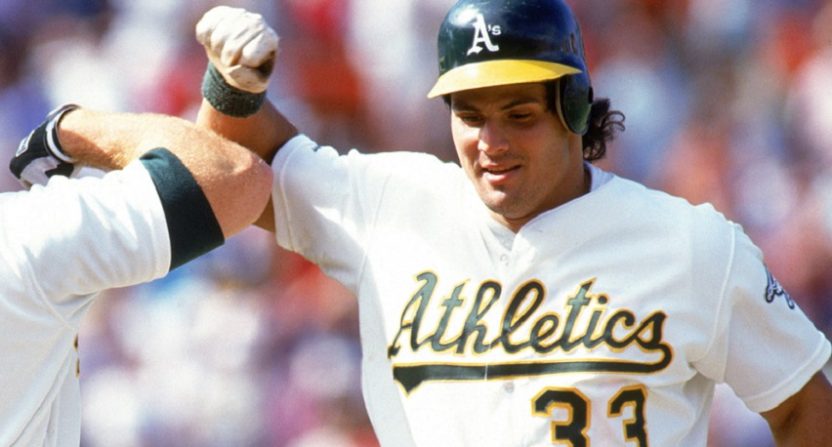 CSN California (soon to be NBC Sports California) is overhauling its Oakland Athletics pre- and post-game coverage for the upcoming season, and the lineup has a distinctly 1990s feel to it. Dipping into nostalgia and calling back to the most remembered eras of a team is certainly a way to draw in fans and provides a good hook for regional cable networks.

With that in mind, NBC Sports California is adding Jose Canseco to its studio team for its A’s Pregame Live and A’s Postgame Live programs. The famed slugger has never been afraid to be outspoken, and the network is obviously hoping that Canseco speaking his mind makes the A’s studio shows must-watch TV.

“I’ve got quite a bit of experience. I’ve pretty much been there, done all of that whether it’s on or off the field,” Canseco told CSN California’s Joe Stiglich. “I think the fans can expect the truth — an honest opinion, honest analysis — and hopefully in some shape or form we expand the fan base.”

Canseco could become a Twitter (and Awful Announcing) regular, if he’s as intriguing and outrageous as he’s been in public and on Twitter since his playing days ended.

Canseco won the 1986 AL Rookie of the Year award with the A’s and went on to become one of MLB’s most feared sluggers during his nine seasons in Oakland. He won the 1988 AL Most Valuable Player award for a team that went 100-62 and eventually lost the World Series to the Los Angeles Dodgers. Canseco hit 254 of his 462 career home runs with the A’s, who made the World Series (winning one championship) three times during his tenure. He was traded to the Texas Rangers during the 1992 season.

No word on how many games Canseco will be in studio, but given how prominently NBC Sports California is featuring him in promoting its new lineup, he figures to have a large role during the upcoming season. An A’s official indicated as much to the San Francisco Chronicle‘s Susan Slusser:

“We’ve been using Jose a little more over the past couple of years,” A’s senior advisor for broadcasting Ken Pries said. “He’s been making different appearances for us, coming to the ballpark, and that’s worked out very well. We’ve been very pleased with the fan response. We talked to him about this and he said, ‘Yeah, that would be fun to do.’

“Jose’s personality is very exciting. You never know what he’s going to say.”

Canseco isn’t the only face from those 1990s A’s teams that will join the CSN California studio lineup. Dave Stewart will also be a part of the team. The right-hander was one of MLB’s best pitchers with Oakland, famed for his death stare from the mound and phenomenal success. Stewart compiled a 119-78 record and 3.73 ERA in his eight seasons with the A’s, winning 20 or more games four times (and finishing among the top three in AL Cy Young Award voting three times).

“I love talking baseball,” Stewart told Stiglich. “Baseball has been my life for over 40 years. To share some of my experiences in the game, to be able to give a different point of view to viewers, I can’t think of a better situation. And then to speak about a team that’s been my favorite team since I was a kid is exciting.”

Stewart had been the Arizona Diamondbacks general manager during the past two seasons, working under former A’s manager Tony La Russa. Prior to that, the former pitcher was also a player agent and major league pitching coach (with the Blue Jays and Brewers).\

Yet another pitcher joining the A’s Pregame Live and A’s Postgame Live is Dallas Braden. The left-hander spent all five of his MLB seasons with Oakland, compiling a 26-36 record and 4.16 ERA. Braden’s A’s career is best known, however, for the perfect game he threw in 2010. He will provide studio analysis for NBC Sports California in addition to the work he does for ESPN’s Baseball Tonight.

“It might sound kind of cheesy, but it was a little emotional,” said Braden, also to Stiglich. “How I’m looking at it, it’s the first steps of getting back to being a part of the organization on more than just a surface level as a national guy. Now I’ll have the opportunity to dive in. It means a lot to me because I really do feel connected to the fan base as well. And I think it’s clear the organization has started a phase of transition. They have some new energy and new ideas from what I understand.”

The A’s don’t figure to be successful on the field during the 2017 season. Preseason projections have them finishing last in the AL West. Could they be one MLB team whose studio show is worth watching more than the team’s actual games?