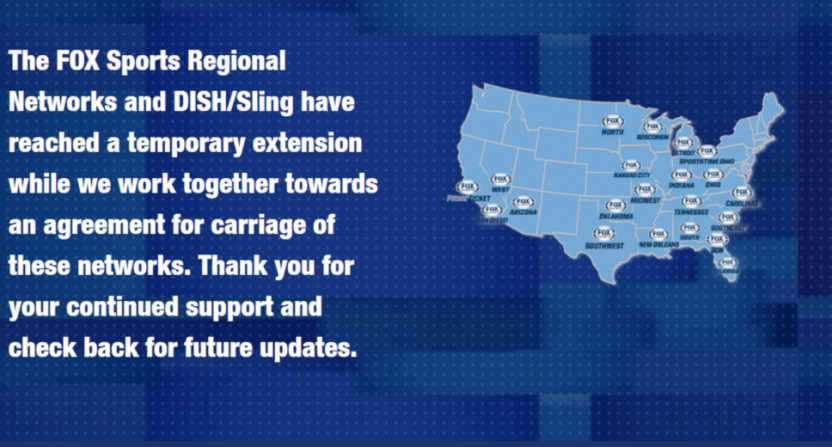 There are plenty of carriage disputes out there, including the current one between CBS’ owned-and-operated stations and AT&T U-Verse/DirecTV and including the reluctance of the likes of Comcast, Dish and Charter to pick up the ACC Network. But the one between Dish (and Dish’s SlingTV service) and the Fox regional sports networks, FX and National Geographic is particularly interesting. For one thing, it’s an expiration that didn’t actually lead to a blackout (the deal was set to expire Sunday night, but the sides agreed to a short-term extension). For another thing, it’s about networks that are under different leadership; while all of those networks are majority-owned by Disney at the moment, the RSNs are in the process of being sold to Sinclair, and there’s an independent team at those RSNs handling their carriage negotiations. Here’s more from John Ourand of Sports Business Journal:

The Fox-branded RSNs are in the middle of their first big distribution battle with Dish Network — a satellite distributor that has earned a reputation for dropping popular channels like HBO, which hasn’t been on Dish since November. Dish Net’s deal to carry the 21 Fox RSNs ended last night. The two sides agreed to a short extension through the beginning of this week. At deadline, they were trying to negotiate a longer extension that would run through the end of the week.

Complicating the RSN talks is the fact the Dish Net’s deal to carry FX- and National Geographic-branded channels also ended yesterday. Those channels were part of Disney’s $71.3 billion purchase of 21st Century Fox entertainment assets in March. Disney also worked out a short extension while it continues to negotiate a bigger deal. The official word from Disney is that the two are having “productive conversations.”

As Ourand notes, Disney’s Justin Connolly (just tabbed as “president, media distribution“; he was previously “executive vice president, affiliate sales and marketing, Disney and ESPN Media Networks“) is leading the negotiations for FX and NatGeo, while Mike Angus (previously with NewsCorp, Fox and Time Warner Cable) is leading negotiations for the RSNs (currently operating as a holding group separate from Disney). So these networks won’t necessarily strike a deal as a package in the end. It’s quite possible to see an outcome here that involves a deal for FX and NatGeo, but not one for the RSNs.

And along those lines, Fox Business’ Charles Gasparino reported on the weekend that the Disney/holding group goal is for a temporary extension for the RSNs, with Dish to then negotiate a full deal with Sinclair once Sinclair’s purchase of those RSNs is approved. But as per Gasparino, Dish apparently wants the holding group to sign a longer-term deal that Sinclair will then be committed to. And these negotiations are also interesting considering Dish’s involvement in the T-Mobile/Sprint merger discussion this week (Dish has been pegged as a likely candidate to receive some assets from those companies to launch a new carrier):

SCOOP(2): Sources say @Disney wants temporary extension so new owner @WeAreSinclair can cut a long-term deal for RSN prgramming w @dish. But Ergen is playing hardball (surprise) on price that may mean that @Sling will be without significant sports programming starting tomorrow

So we’ll see what all of this comes to, whether that’s a deal that covers FX/NatGeo and the RSNs, a deal that covers one group or the other, or no deal at all. And we’ll also see just how long any such deal winds up being, especially on the RSN side. But it’s interesting to see this negotiation expire without a blackout, although one still may be coming. And this negotiation is worth keeping an eye on, particularly as it pertains to the RSNs; no deal at all (and a blackout) or a long-term deal both could have significant implications for Sinclair, even before their purchase of the RSNs closes.