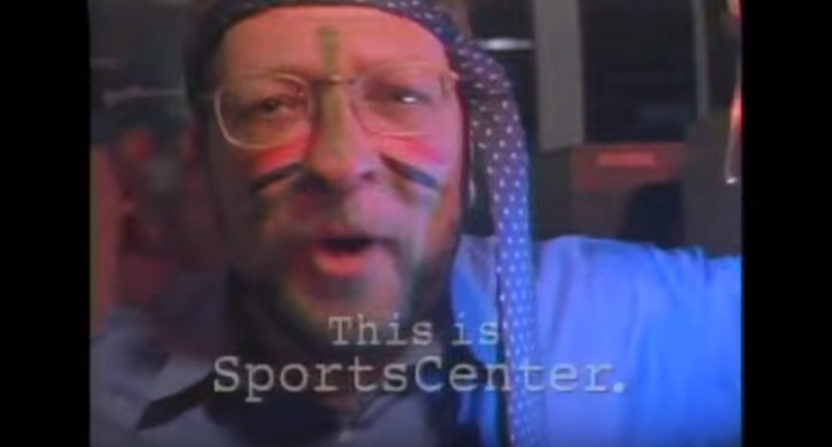 Current Dodgers radio announcer Charley Steiner has had a remarkable sports media career, from local radio and team broadcasting (including a three-year stint as the play-by-play voice for the USFL’s New Jersey Generals and two years calling the New York Jets) through a decade-plus at ESPN as a SportsCenter host, boxing analyst and baseball radio broadcaster.

His time in Bristol also included starring in some of the most memorable This Is SportsCenter ads, most notably “Follow me to freedom!” (seen above) and hiding from Evander Holyfield before moving on to play-by-play work on the Yankees (2002-04) and Dodgers (2005-present) radio broadcasts.

But Steiner also has some great stories from outside the sports world, and the Just Not Sports podcast explored that in a recent interview with him. Their conversation about his trip to the original Woodstock Music and Art Fair in 1969 is particularly remarkable, beginning around 22:30:

The especially notable part of that comes around 32:00, where Steiner talks about the challenges he and his friends faced in getting to Woodstock, and why they decided to leave Saturday, missing the likes of the Grateful Dead, Creedence Clearwater Revival, Janis Joplin, The Who, Jefferson Airplane, The Band, Crosby, Stills, Nash & Young, and Jimi Hendrix as a result. Some quotes, transcribed by Just Not Sports’ Brad Burke:

·         “The weather was horrible. It was cold and it was rainy. It was supposed to have begun at 5 o’clock in the afternoon on a Friday. And about six of us drove up from Long Island in, naturally, a Volkswagen bus. It was just stereotypical hippie stuff.”

·         “What should have been a two, two-and-a-half hour drive, we left at 10 o’clock on Thursday night … and got in about 7 o’clock in the morning. As you know, the New York State thruway was closed down and the two-lane roads to Yasgur’s Farm were nothing but gridlock. And so we got out of our little Volkswagen bus and started meeting other folks. It wasn’t chaos, it was slow-motion chaos. Because nobody knew where to go. There were no fences. We just kind of arrived near the stage area, ending up about 20 yards from the stage.”

On the worsening conditions and his decision bail early (34:45)

·         “And the night went on, and the weather got cold and nasty and muddy. And truth be told, I was out of there late Saturday afternoon, early Saturday evening. It was just miserable. So I hitchhiked back to New York. But yes, I was there for about, oh (24) to 36 hours, something like that. … I was not there at the end with Hendrix and the national anthem, so I missed a lot of good stuff.”

·         “It was miserable. Here was another issue I had, and I haven’t thought about this in years. The group of us that’d been in the Volkswagen bus kind of dispersed. And I, stupidly, was wearing a pair of sandals. Sandals should not have been worn in that weather, on that land, and so they broke about 10 minutes after I got there. So now I’m barefoot in the mud, in the rain.”

On whether he remembers it fondly now, despite the issues back then (37:15)

Well, hey, even though he left early, Steiner still made it to Woodstock, which is more than many can say. And some impressive acts played Friday and early Saturday too, including Ravi Shankar, Arlo Guthrie and Santana. It also makes some sense to get out of there; being barefoot in the mud and rain for days doesn’t sound great. And while it’s definitely unfortunate that he missed some of the memorable later performances, it may be more fun listening to those later from a nice dry home, rather than in the Woodstock mud.

At any rate, that’s a great story from Steiner (and the whole podcast is full of some pretty remarkable stuff from him), who’s had quite the amazing life and career.

[Just Not Sports on Soundcloud]