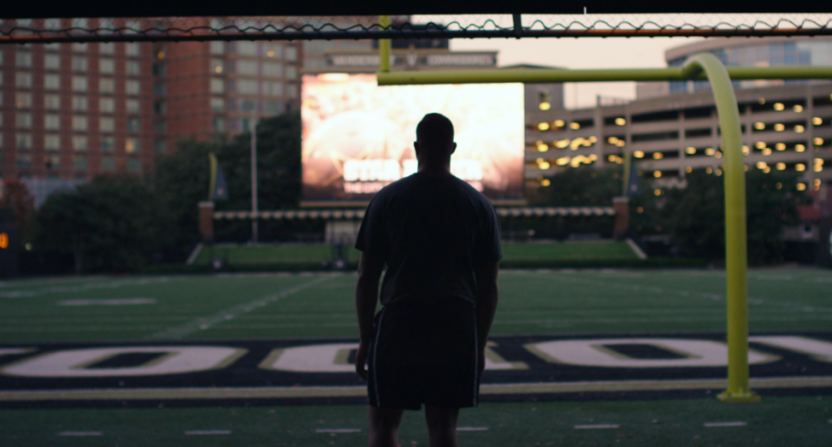 We’re continuing to see more and more original sports documentaries coming out, and the latest interesting one is from AT&T’s Audience Network. They’ve announced that on June 28, they’ll be exclusively premiering Alone in the Game, a new original documentary discussing issues for LGBTQ athletes that features interviews with current and retired athletes, as well as sports figures like NBA commissioner Adam Silver and former ESPN president/current Perform Group executive chairman John Skipper.

Here’s a trailer for the documentary:

Here’s some more information on it from Audience’s site:

Despite the growing acceptance of lesbian, gay, bisexual and transgender Americans, sports continues to be an unsettling environment for many LGBTQ people on and off the field. Homophobia, transphobia, and a culture of secrecy strongly persist in American sports, often seen as the final frontier for LGBTQ equality. In the five major North American professional leagues – NFL, NBA, NHL, MLB, and MLS – where statistically we would expect hundreds of openly gay athletes, there are no openly gay male professional athletes currently competing. Alone in the Game is a powerful documentary that enters into the old boys’ club world of sport and examines this major dilemma at the professional, Olympic, collegiate, and high school levels – capturing rarely seen stories of struggle, perseverance, and triumph. This 90-minute documentary premieres on AUDIENCE Thursday, June 28th at 8pm ET/PT and includes interviews with notable people such as NBA Commissioner Adam Silver, Olympic Skier Gus Kenworthy, former NBA player Jason Collins, pro soccer players Robbie Rogers and Megan Rapinoe, and others.

That trailer’s certainly interesting, especially when it comes to Rogers and Kenworthy talking about the lack of out role models for many young athletes. Rogers says “I think from a young age when you realize you’re gay, there are no gay icons you can look up to that play sports” and Kenworthy says “No one in my small town was gay, no one in freeskiing was gay.” Rapinoe’s comments about the lack of out athletes as a sign of homophobia are notable, too; she says “If there wasn’t homophobia in sports, and if everyone felt comfortable to be who they were, then everyone who was gay would be out.”

The interview with Chris Mosier, the first trans athlete to compete for a U.S. national team, could also be significant. Regulations on trans athletes are getting more and more attention, but their stories are perhaps still less-discussed than those of gay and lesbian athletes. The discussions of athletes contemplating suicide are important too, as that shows the seriousness of this topic. So there’s a lot to go on here, and it sounds like this will be pretty interesting.

Alone in the Game is directed by Natalie Metzger, with David McFarland as creator and executive producer. McFarland told the American Film Institute (which made this film an official selection for its festival in Washington, D.C. next month) he wants it to illustrate the challenges that remain for LGBTQ athletes:

I have the privilege to examine these issues at the highest levels of sport — live these issues, really — up close and in person, and these experiences have given me a true and factual understanding of just how serious these problems are for LGBT athletes and how great an impact the world of sport can make when the right decisions are made by those in positions of power. When there is no current out gay male professional athlete actively playing in the Big 5 major leagues, you know we have a serious problem that affects the future of sport and the well-being of our LGBT athletes.

…I really want the audience to understand that even though America’s cultural, social and political climate is becoming increasingly accepting of lesbian, gay, bisexual and transgender (LGBT) citizens, competing and participating in sport is still considered to be an unsettling and unsafe environment for many LGBT athletes, coaches and sport administrators on and off the field. I hope that communities all across this country will see this important film and take action to ensure that the opportunities and dreams are the same for all athletes, coaches and those who participate in sport regardless of their sexual orientation or gender identity. The obligation is on us all, regardless where in the sports power matrix you reside, or even in society as a whole.

McFarland and AT&T’s Daniel York also had interesting comments in their release on the documentary:

“It’s time to unveil such important and inspirational stories. We’re giving viewers a rare look into the lives of these elite athletes’ unique journeys and open their eyes to the daily challenges these athletes face on and off the field of play,” said David McFarland, “Alone In The Game” creator and executive producer. “With added attention to this issue, I’m hopeful we can affect real change at the highest levels of American sport and that the next generation of LGBTQ athletes will be judged by their athletic performance, rather than their sexual orientation or gender identity.”

“As America’s culture, including that of the sports world, continues to evolve, AT&T remains steadfast in our support of inclusion, which encompasses advocating the right mindset surrounding the LGBTQ community,” said Daniel York, senior executive vice president and chief content officer for AT&T. “We are honored to provide these athletes a platform to share their stories and empower others going through similar struggles.”

We’ll see how this documentary turns out, but it’s definitely a notable subject, and a timely one.

Alone in the Game will premiere on Audience Network June 28 at 8 p.m. Eastern and again at 8 p.m. Pacific.

[Correction: this piece initially had McFarland as director instead of Metzger.]