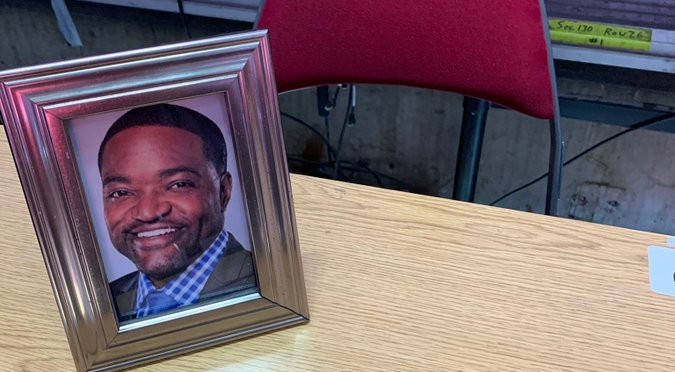 The passing of long-time NBA.com/NBA TV writer and analyst Sekou Smith at 48 Tuesday after a battle with COVID-19 sparked a lot of tributes throughout the sports world. Many of the initial Twitter tributes are included in that first post, but a few notable longer tributes to Smith (who had worked at NBA TV/NBA.com since 2009 following stints with The Atlanta Journal-Constitution and The Indianapolis Star) came out Tuesday night and Wednesday. One was the Cleveland Cavaliers’ decision to reserve a press box seat for Smith ahead of their game with the Detroit Pistons Wednesday night, as seen above. Here’s more on that from Cavs’ announcer Rafa El Alcalde:

Special seat reserved in the media section of @RMFieldHouse for our friend and member of our @nba family @SekouSmithNBA for tonight’s @cavs game vs #Pistons. #RIPSekou our thoughts and prayers are with your family and friends. pic.twitter.com/hRoR4xkCcg

The Hawks also held a pre-game moment of silence for Smith:

A moment of silence for Sekou Smith before tonight's game ?❤️ pic.twitter.com/cjojoYiqa0

Beyond that, NBA.com’s Shaun Powell wrote a touching tribute to Smith Tuesday night recapping the thoughts of many others. Some highlights:

“Working on the road with Sekou was an incredible experience because he knew everybody,” said Steve Quintana, executive producer at NBA.com. “Not only players and coaches, but security guards, parking attendants, equipment managers, doormen at the hotel. Everybody knew him and Sekou always stopped to talk to them.”

…At NBA Digital, Sekou collected countless friends and admirers, all of whom were served well by someone who made everyone comfortable in his presence.

“He’s one of the writers who gets it,” said Dennis Scott, the former player and currently an analyst on NBA TV, “one who dug deeper for the story. Sekou got into who we were as athletes and as people.”

…NBA.com senior writer Steve Aschburner: ‘I don’t know anyone who moved more easily than Sekou through the many layers of the NBA.’The amount of friends and colleagues and casual acquaintances multiplied over time and cities and jobs … and that’s why the hurt and the shock and the sorrow run so deep and vast today. Sekou Smith died in Atlanta on Tuesday at 48. He left behind Heather, his wife; sons Gabriel and Cameron, and a daughter, Rielly.

…Turner Sports president Lenny Daniels: “To anyone who knew Sekou, he was the utmost professional and someone who was so dedicated to his craft. He was well connected throughout the industry and his passion and love for the game was unwavering … beyond his many professional accomplishments, Sekou will be remembered as being such a wonderful person. His closest friends describe him as “everyone’s best friend” for how much he genuinely cared for others at all times. He had such a warm, engaging personality and an ability to truly connect with people.”

Marshall Harris, the sports director for CBS 48 in Sacramento, wrote a compelling piece on what Smith meant to him:

Before he was hobnobbing with NBA players and coaches at Turner Studios, Sekou Smith worked at the largest daily newspaper in Mississippi, The Clarion Ledger. That’s where our paths crossed. He was working the beat at Mississippi State, covering football and basketball. I was a student journalist at MSU still finding my footing, finding my voice. I knew the name but it wasn’t until I started covering Bulldog basketball games that I met and came to know Sekou. He was one of very few black faces I came into contact with covering games. Sekou had this way about him, a super rough exterior like he didn’t want to be bothered. But beyond the thinness of that exterior was a heart of gold. I used to tell him back then that he was the world’s “youngest grumpy old man.” Sekou was funny, the best kind of funny. He had jokes…endless jokes. Observational jokes, jokes on you, jokes on himself. Self-deprecation at its finest. As I was being comforted in my grief after learning of his death, I was reminded jokes are my love language. And this man communicated as well as anyone through humor. I can hear his unique voice even now as I write this, whether it was complaining about Michigan’s waywardness on the football field or him asking me about my latest “dips.” He loved his family dearly. That voice sure did take a turn when he spoke about his family. He was so proud of his kids. But that’s Sekou.

…The greatest thing Sekou ever did for me was talk me into attending my first National Association of Black Journalists Convention back in 2000. I was in college and didn’t have enough money to spring for a flight to Phoenix, registration and hotel. I couldn’t afford it; I told him I couldn’t make the trip and I’d try to save up for next year. But Sekou told me not going was not an option and that I could crash with him. So I went (READ: he dragged me), and that’s where I met these guys Stuart Scott and Kevin Frazier, who I grew up watching on SportsCenter, who would become vital mentors in my career path. I’ve only missed one convention since, 2012 in New Orleans when I went to London to cover the Summer Olympics. Fitting that the last time I saw Sekou was at the 2017 NABJ Convention in New Orleans. I had lunch with Sekou and his wife Heather. I still can’t believe that’s the last time I’ll spend time with him. And can you believe this man had the audacity to try to put up a fight when I picked up the check? But that’s Sekou.

Chris Vivlamore, who worked with Smith at the Atlanta Journal-Constitution, also wrote a notable tribute:

I worked with Sekou when he came to Atlanta from Indianapolis to cover the Hawks for The Atlanta Journal-Constitution in 2005. I was the pro-sports editor, and Sekou and I spent the next four years working together. He was one of the best reporters I have known. He did so with a personality that shone so brightly, including his 1,000-watt smile and laugh. He made every minute you were with him better. Every minute. He loved and bragged on his family, was kind, generous with his time and willing to join a good debate. He could argue the merits of why he thought the Big Ten was a better football conference than the SEC. Yes, he had that debate once.

The outpouring of love and respect for Sekou after news of his death speaks to his character and talent as a journalist. His friends and colleagues in the NBA world expressed their grief. The NBA and the Hawks, among others, issued statements. Coaches and players spoke about him in glowing terms. There were only glowing terms when it came to Sekou. The Hawks used the word “heartbroken” in their statement. We all are.

And here’s a nice tribute to Smith that NBA TV aired Wednesday:

“You can’t find a single person in the media or the NBA world who didn’t get along with Sekou.” @JaredSGreenberg, @IsiahThomas and @3DTV pay tribute to Sekou Smith. pic.twitter.com/fMIPCyOThd

And here’s another one from ESPN’s Rachel Nichols:

There are not enough words to describe how much the NBA will miss Sekou Smith. I tried get through a few, but honestly, it just feels impossible. Our country has allowed more people to die of COVID than any other (by far) and I'm sad and angry and so gutted for his family. pic.twitter.com/Q1dxvZqcUX

Smith made an incredible impact on the NBA media world, and it’s cool to see so many people speaking publicly about what he meant to them. He’ll long be remembered.

"The timing is what really upsets me."

"The timing is what really upsets me."