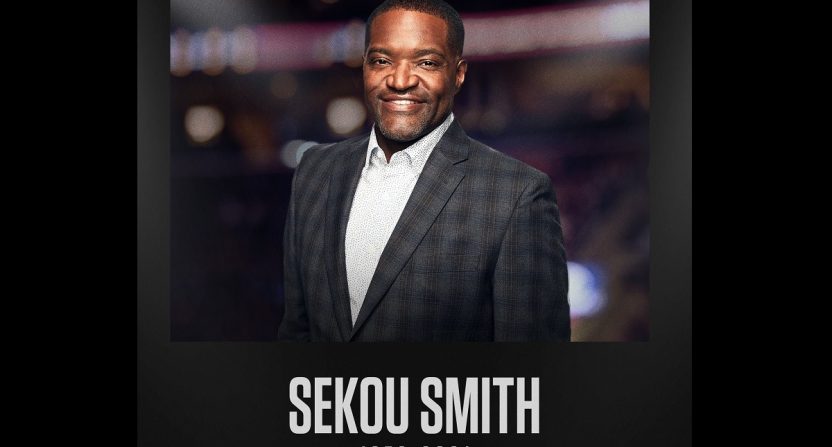 The NBA world has lost a prominent voice. Sekou Smith, who worked for the Indianapolis Star from 2001-05, for the Atlanta Journal-Constitution from 2005-09, and for NBA.com and NBA TV from 2009 on, has passed away. Smith had been battling COVID-19; New Orleans Pelicans coach Stan Van Gundy sent him good thoughts from a press conference last week. @Unit1HoopSource was the first to tweet about Smith’s passing Tuesday, but many others have since joined in with confirmation and with tributes to Smith:

Today we lost one of our good brothers “ Sekou Smith.” We just spoke to him 2 weeks ago about doing our HBCU symposium in his hometown Grand Rapids Michigan. He was extremely excited! He attended Jackson State!

For 2 decades he was a staple in the NBA for writing contest! pic.twitter.com/j8D7cWF0OL

Heavy heart today..We lost a good brother to Covid.
Sekou Smith of @NBATV and https://t.co/dyMHCgGy2q was a brilliant and insightful writer,a positive dude.
He’s gone home to be with the Lord. ??
Philippians 4:4 pic.twitter.com/Yw5xvwZ51g

Thank you for your brotherly friendship, humor, honesty and compassion. Glad we had a chance to tell each other we loved each other three weeks ago. You were a gift to this Earth as a friend, father and a man Sekou Smith. Rest In Peace to my brother. Prayers to your wife & family pic.twitter.com/mqjnZyEHNz

Sekou Smith was one of the good ones, y'all. His love and enthusiasm for the game of basketball was unmatched. I loved talkin' hoops with him at NBA TV. My deepest condolences to his family, friends, and the entire Turner Sports team. This hurts. pic.twitter.com/4hXa1VyJCI

Sekou was my colleague, and my friend, but most of all he was my brother. I will miss him dearly, but will also remain thankful for all the great times we had together. Love you forever, man. ? pic.twitter.com/ap2YizjjPk

Too much pain. Lost a good friend Sekou Smith to Covid. We worked together at the @AJC and remained friends for years after. My heart breaks for his wife and two boys and all who loved him and knew him as we did. Devastated. I'm so done with this shit.

I grappled with this today with tears running down my face. Sekou Smith was my friend. I lost my friend. We worked together and alongside each other. He made every minute you were with him better. Every minute. Prayers, peace and love to his family. I love you man. #SEKOUSTRONG

Sekou Smith was such an amazing person.

He was so incredibly talented and knowledgeable, so gracious with his time and always there to answer any questions I had or pass along his wisdom about covering an NBA beat.

This is awful. Praying for his family.

I can't fathom the news about Sekou Smith. Devoted father, hard worker, quietly reasonable NBA-TV commentator, great companion. We went out to Ray's On The River in ATL a couple of years ago and told stories for hours. He was right about so many things. This is such a tough one.

May we all be as kind, as talented, as hardworking, as in love with the game and the craft as much as Sekou Smith.

Sekou Smith was my brother from another. We bonded from day 1, mostly because he bonded with everybody from day 1. I’m absolutely gutted, especially for his wife, his kids & his pops. I can’t describe how much his friendship will be missed.

I love you, brother. pic.twitter.com/ihV9CXlgoY

Saddened to hear the news of Sekou Smith’s passing. He was as talented and as kind as you’ll find in sports media. Deepest condolences to his loved ones. He will be missed. ?

Nooo.. Growing up Jackson Mississippi, one of the first sports writers I was told to read about.

Our members are devastated by the passing of our beloved friend and trusted colleague Sekou Smith. He was a kind, caring person and a tremendous journalist. We love you, Sekou. Our thoughts and prayers go out to his family and his co-workers at Turner Sports.

One of the greats. The kindest guy, always so happy and positive, an incredible multidimensional talent.

Rest In Peace my friend ?

The Turner Sports family mourns the loss of our very own, Sekou Smith.

Our thoughts are with his family and friends. pic.twitter.com/97mu4bylfA

“His impact will be felt forever because of the way he was as a man.”@steve21smith honors and remembers Sekou Smith. pic.twitter.com/sbHnomOWUc

Smith graduated from Jackson State University in 1997 with a degree in Mass Communications, and he went on to make a huge mark in the NBA world. He started as a respected and prominent beat writer covering the Pacers and then the Hawks, as well as the whole league, and then he became one of the most prominent and notable figures at NBA TV and NBA.com after moving there. His recurring “Sekou’s MVP Ladder” (which he did as recently as  earlier this year) was a popular feature for both NBA.com and NBA TV.

Smith was an early writer to shine in multiple other mediums, including TV and podcasting (the NBA.com Hang Time podcast with Lang Whitaker and Rick Fox), and his love for basketball was always obvious; in addition to the NBA, he delivered great coverage of Olympic basketball, other international basketball, the NCAA and the grassroots level. Our thoughts go out to his family and friends.

[@Unit1HoopSource on Twitter; top screengrab of a 2018 Smith NBA TV appearance from NBA.com]