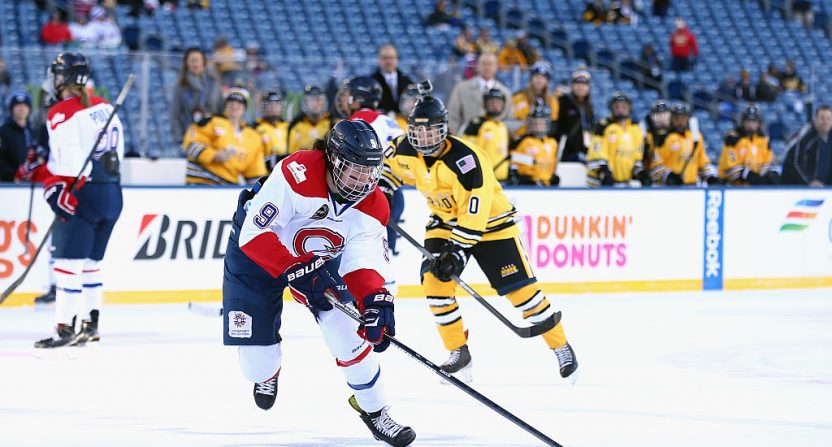 Some general sports columnists have frequently been criticized for not learning enough about particular subjects they occasionally touch on, and the latest to fall right into that appears to be John Smallwood of the Philadelphia Daily News. Smallwood decided to write about the U.S. women’s hockey team’s ongoing dispute with their federation, and suggested that many of their issues could be solved by forming a league.

The problem? Smallwood’s column doesn’t mention the leagues they currently have, the National Women’s Hockey League and Canadian Women’s Hockey League, at all. (It also has a terrible “Smallwood: U.S. women’s ice hockey players need a league of their own” headline, and a bizarre photo choice; a photo of the Philadelphia Flyers’ bench. No idea what’s going on there.) Here are the highlights, or rather, the lowlights:

I agree with the women’s players that it is pathetic that they are only guaranteed $1,000 a month for six months leading to an Olympics.

But, if these NHL players and coaches are serious about wanting to help women’s hockey, they should approach NHL commissioner Gary Bettman with a proposal to subsidize a women’s professional league like the NBA did with the Women’s National Basketball Association.

…If it had the financial stomach and followed the WNBA blueprint, the NHL could easily subsidize a six-team women’s league and give players the opportunity to show that their sport could be viable at the professional level.

Look, there’s an argument to be made that the NHL should be more involved with the NWHL and/or CWHL, perhaps even to the tune of ownership or subsidization. There’s also perhaps an argument that those leagues should take on a larger role in the payment of international women’s hockey players (they’d need much more money from somewhere to do that, but sure). If Smallwood wants to make those arguments, great. But his column certainly comes off as not even knowing those leagues exist. He apparently does know of the NWHL, at least, as he referenced it in a poorly-reasoned earlier blog post criticizing the female hockey players, but why he chose to not mention that here as well is bizarre.

Smallwood’s column also comes off as ignoring that many people involved with these leagues have reached out to Bettman and the NHL on numerous occasions, and have been involved with the NHL on some occasions (including the Women’s Hockey Classic at the NHL’s 2016 Winter Classic, seen above, which featured the CWHL’s Les Canadiennes and the NWHL’s Boston Pride). He’s presenting this as his own brilliant idea, and apparently ignoring what’s actually going on on those fronts. This led to him getting roundly roasted on Twitter:

As someone who used to work for the Inquirer I'm embarrassed that @phillysport ran that piece. No decent editor would have allowed it.

Honestly I'm more offended as a (former) journalist than I am as a women or as a hockey fan. That's just terrible, terrible shoddy work.

@phillysport Let's talk about women's hockey & make sure people know it can't exist w/out the help of dudes. (Except it already does.)

Really proud of @phillysport for putting out not one, but two articles doing nothing to help the women's cause with USA hockey.

Hey @phillysport you need a columnist? I got a great pitch about how EPL could spread soccer by starting USA's 1st professional men's league

Hmm perhaps you are the wrong writer for this piece, then pic.twitter.com/RwQzkITJ69

@phillysport this is honestly just embarrassing. You should probably have your journalists do some research…

As others have noted, Smallwood’s piece doesn’t necessarily represent all of the work of the Daily News and the Inquirer. In fact, Jonathan Tannenwald had a well-researched news piece on the pay discussions at Philly.com just last week. One bad column (well, a bad column and a bad blog post) doesn’t mean that the papers are terrible, or that their overall coverage of this dispute is awful. But this is a very poor column, one that bizarrely doesn’t even note those leagues’ existence and makes it sound like the NHL would happily subsidize a new league if it just asked. Telling journalists “stick to sports” often doesn’t go over well, but perhaps Smallwood should stick to sports he knows more about.