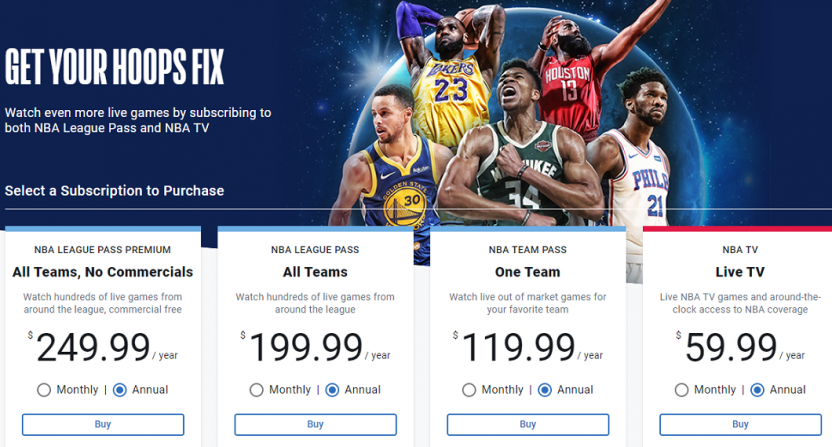 If you’re in the middle of the Venn diagram consisting of people who love the NBA to death and people without current access to NBA TV for whatever reason, good news: you can now purchase an over-the-top subscription.

Jason Gurwin had it first at The Streamable.

SCOOP: NBA Launches OTT Subscription to NBA TV for $7 a Month, or $60 a Year. Can be subscribed to separately or added to your NBA League Pass subscription.https://t.co/exknVoj9lK

You can see the new pricing tiers with the NBA TV standalone option here, if you like.

As Gurwin notes, the pricing is available monthly for $7 or on an annual basis for $59.99:

The NBA is now selling an online subscription to NBA TV for $59.99 a year (or $7 a month). The subscription includes a live feed of NBA TV across devices including Roku, Fire TV, Apple TV, iOS, and Android — including all out-of-market NBA games televised on the network. Included in the package is video-on-demand access to every NBA Finals game from 2000-2019 and exclusive NBA TV shows.

The NBA’s League Pass price tiers aren’t changing, ranging anywhere from the Team Pass option for $119.99 up to the Premium level at $249.99. Adding NBA TV to that top tier results in a $309.99 annual outlay.

Who does this benefit? Well, as with any over-the-top service, cord-cutters are on the list. If you’re not interested in paying for either a monthly cable, satellite, or streaming TV service, it’s probable you’re also not interested in paying for League Pass. This could be a way to reach some of that market, offering some national games (albeit rarely a marquee matchup) or replays of games to help give those customers a fix.

There’s also the NBA fanatic camp, a group that may be more than willing to pay for League Pass but have no interest in any other kind of overall television subscription. This would be essentially the completist package, aside from various blackouts applying.

The cost, though, is certainly relevant. $7 a month might not sound like a lot, and surely some will pay it, but that’s on the same level as things like the upcoming Disney+ service:

At $7 as expensive as Disney+ but no harm in trying I guess. I think it should be a freebie for League Pass subscribers. https://t.co/JaDYaFoSvG

Considering all of the NBA you could see by, say, signing up for Hulu or YouTube TV (ESPN/TNT games, local games, etc) which also include NBA TV, it’s going to be a sticking point for some. But, it also probably isn’t going to cost the NBA a ton to offer this, considering the network is already in place, as is the League Pass streaming infrastructure.

It might not have a wide appeal, but it does have some appeal, and more choice is rarely bad for consumers.