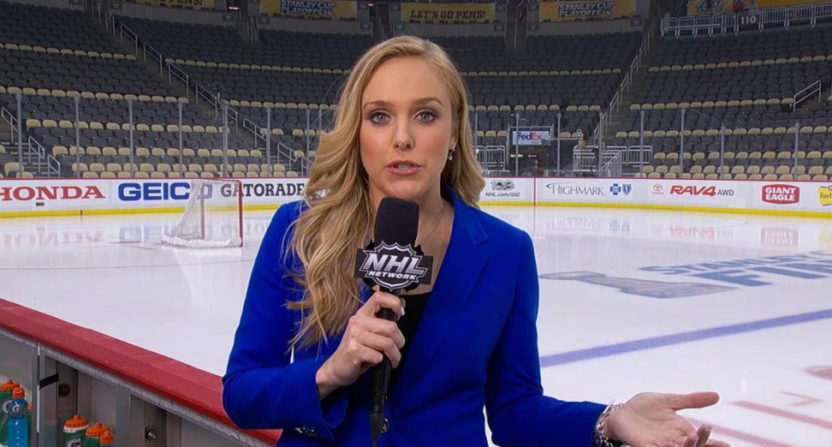 Beyond that, the show will feature NHL vice-president (special projects and corporate social responsibility) Jessica Berman discussing the league’s inclusion efforts and its “Hockey Is For Everyone” initiative, a partnership with the NHLPA and the league’s teams to specifically promote inclusion throughout February. Hersch, the NHLN host and reporter who regularly hosts their On The Fly highlights program, spoke to Awful Announcing about the unique show Tuesday, and said it came about as part of the Hockey Is For Everyone campaign.

“One of our coordinating producers came up with the idea originally as just part of Hockey Is For Everyone. The way it was told to me was ‘We have so many female contributors already, whether it’s on the show or female correspondents that cover all the different teams of the NHL, or other females from the world of hockey, from former players to someone like Kathryn Tappen who’s been maybe the face of the NHL for a number of years now.’ So it was a way to celebrate that as part of Hockey Is For Everyone month, and I thought it was an amazing idea, because we don’t really have to change much about the show at all, just have women do it, because we already are filling these roles. …It’s very exciting to me.”

Hersch said it’s terrific to see how many women are covering hockey these days, which allows NHLN to do something like this.

“For most of my career, I’ve felt very much that I stood out. Which isn’t always a bad thing, I like to stand out. But to walk into a room even at this year’s All-Star Game and see so many women, not just with microphones in front of the camera but also with a pad of paper and a pen, because they’re not just on camera, they’re also really great writers and reporters and bloggers and have podcasts. So it is amazing to me to see how many women there are covering hockey. And it’s exciting to know that I won’t stand out as much down the line in some ways. To have someone like Amalie Benjamin, who’s so smart and such a great writer, and to have her be a part of this and do her Super 16 power rankings…I’m so proud to see how hockey has opened its arms to women as much as men.

As for particular highlights to watch for, Hersch said she’s especially excited to get to talk to the Lamoureux sisters about their Olympic experience.

“It’s going to be so fun, especially to have the gold medalists, which adds another whole layer. The Lamoreux twins, Jocelyne and Monique, are coming in. …For me, it’s going to be a dream come true to talk to them, because I’ve never seen a gold medal, and I think, I’m hoping, that they’re going to bring it. So that’s going to be amazing just to see a gold medal up close and in person.”

Hersch stayed around after recording On The Fly to watch that gold-medal game, and her reaction to Jocelyne Lamoreux’s shootout goal was captured on camera:

There are really no words to describe the moment Team USA won gold. Luckily, the cameras caught my live reaction. No words. All the pride and joy. ???❤️?? @NHLNetwork @usahockey usahockey @TeamUSA pic.twitter.com/z3KvLW1cng

“Just watching that game, I was in studio that night, and it’s one of those moments that I will always remember and I think everyone in the control room will always remember because it was just such a great game. The way they came back to push it to overtime and the shootout was just so thrilling, and I think the game ended something after 2 a.m. our time, but we were all here. Our show had been finished for about an hour at that point, but we all kind of talked about how important it was for us to stay just to at least mention what ended up happening, and as it turned out, it was obviously well worth staying for. To watch them win was something I’ll never forget.”

She said her passionate reaction came from thinking about how long these women had worked to get to that point.

“I was definitely a little emotional about it all. I’m a huge fan of the Olympics and having worked with so many different female hockey players throughout my career and even just growing up in Minnesota and being around them, to see 20 years of hard work and sacrifice come together in finally winning a gold medal, that was something that I’ll never forget.”

Hersch said she’s hopeful that the gold medal can be a starting point for larger conversations about growing women’s hockey and improving the experience at the top levels.

“It’s definitely a good gateway into talking about the larger conversation with getting fair and equal pay for women’s hockey players. I think that will definitely come up, especially as this is the group that specifically boycotted the world championships a year ago so that they could really make their stamp on getting paid to play hockey, which they definitely should be. I hope that does come up, I’m sure it will in some context, maybe even how that whole experience galvanized them as a team and brought them closer together and where they see this taking them, whether it’s taking them to other world championships or just growing the game at the youth level for girls playing hockey. I think all of that’s a really important step and I think this gold medal will help them have those conversations.”

As mentioned, this special show comes as part of the NHL’s larger Hockey Is For Everyone plans (you can see a feature NHLN aired on that program last week here), and Hersch said it’s exciting to be involved with that.

“It’s a league-wide initiative and really just celebrates diversity and inclusion in the game of hockey. What that means is everything, literally. We’ve featured different stories about the United Arab Emirates team coming over and being featured at Washington Capitals’ games, I think they were also at another NHL arena recently too, the Blackhawks had them as their guests. But it’s everyone, people of different backgrounds, people of different races, sexual orientation, and of course women as well. I think it’s just a great initiative around the league, and for us to take that personally at NHL Network is a really cool tie-in.”

Hersch said she and her colleagues have been doing a lot of preparation for this show, and it should have lots of unique segments.

“I would really appreciate anyone tuning in. It’s 4-6 Eastern, and it’s something different from what we normally do. There’s a lot of planning that’s gone into this, Kathryn Tappen and Cassie Campbell are going to FaceTime in, we’re also going to have Manon Rheaume, the first female on a NHL roster from way back when. So there’s just going to be a lot of fun elements to the show. Having the twins here, I think they’re going to do a live demo too, we’re going to ask Jocelyne to actually pull off her serpentine move that won the gold medal in the shootout. So it will be really cool to have them here and hear from them too.”

Redmond, the NHL Network host and reporter who regularly co-hosts NHL Now with E.J. Hradek and is going to co-host Wednesday’s program with Hersch, added a comment via e-mail about how she’s highly anticipating this show.

“I am so excited for the all-female edition of “NHL Now” and feel honoured that NHL Network has asked me to be a part of it. I think it says a lot that the NHL Network not only came up with this idea, but that we also had the resources to pull it off. This particular episode might be a special all-female edition of the show, but I’m proud to be able to say that “NHL Now” utilizes female correspondents for the show on a very consistent basis anyway. I’d also be remiss not to point out that this show is going to be a full circle moment for me with former Team Canada captain-turned-hockey analyst Cassie Campbell appearing as a guest on the show. I’m a Canadian who grew up playing girls hockey. Cassie has always been an inspiration for me and to see everything that’s she accomplished and now get the chance to interview her in this format, is going to be a very surreal moment for me.”

“We can’t wait. It’s going to be fantastic.”

The all-female edition of NHL Now will air on NHL Network Wednesday, beginning at 4 p.m. Eastern.