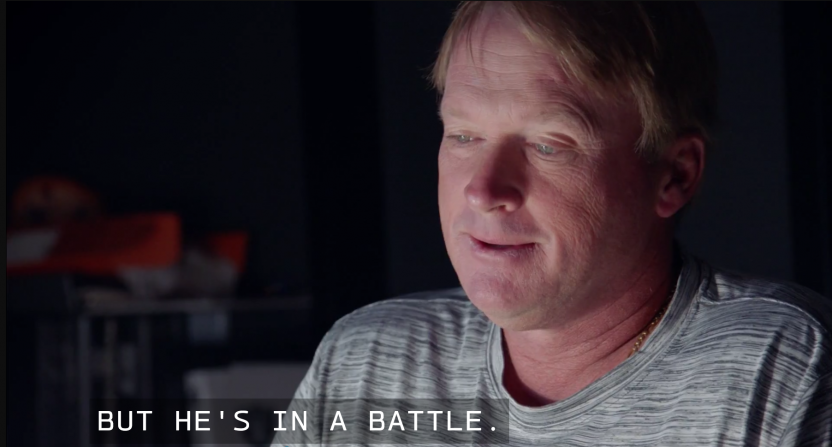 It’s hard to knock this season of Hard Knocks (see what I did there?). Jon Gruden was the most entertaining coaching personality since Rex Ryan. The Antonio Brown feet and helmet sagas gave the show a front row seat to what has potentially been the most followed training camp drama in many seasons. Unfortunately, it was all for naught because the Raiders were particularly stingy with the level of access given to the NFL Films Hard Knocks production folks.

For long-time fans of the show, it didn’t go unnoticed.

Anticlimactic finish to #HardKnocks. Didn't show any interaction between Gruden or Mayock & players getting cut. That has historically been the primary feature of the show. #Raiders have final say & must not have provided access. Very disappointing

This was singlehandedly the worst season of Hard Knocks. You could tell the Raiders edited out a bunch of stuff. They didn't allow any access to the QB room and didn't even show Mayock and Gruden cut guys. The season was very vanilla.

Worst season of #hardknocks I've seen. Almost zero inside access basically could have just watched the preseason games and got the jist. Hopefully this isn't a sign of things to come for the series.

I know a lot of people loved Hard Knocks this year. Loved AB. Loved Gruden. It wasn’t for me. Thought it was the worst season I’ve ever watched.

Very limited storylines. Access wasn’t as good. Gruden came off as some movie coach more than a real NFL coach.

Very weak Hard Knocks. The access makes the show and Gru/Mayock gave us none. Show the players getting cut. Awful.

This whole AB thing points out the uselessness of Hard Knocks a bit, no? To have an all access show not give you all the access is super lame.

Tbh, HardKnocks did pretty fine job considering their very very limited access. Last season, with the browns, felt damn near wide open. This season of HN felt dramatic and theatrical. Either way, it got me hella hyped so I ain't even tripping

As mentioned in many of the aggrieved tweets above, unfettered access is the most critical part to Hard Knocks’ success. Owners and front offices trust NFL Films (which the NFL owns) and always open up the kimono, showing fans how an NFL franchise works. The end product is what has made the show a stalwart for all football fans. I’ve long said as a huge college and NFL fan, that the time between the end of the NFL season and the first episode of Hard Knocks feels like being held under water. It’s not the first training camp practice, nor the first preseason game, that is my first breath of air after more than half a year being deprived of football oxygen. It’s always been the first episode of Hard Knocks. While I’d like to inject Liev Schreiber’s voice directly into my veins, my real addiction to the show has always been the compelling access to where we get to see things like how offices handle holdouts from stars like Larry Johnson or Darrell Revis, as seen below.

Or trading a former first round draft pick right before the season because of inconsistent play,

Or how about last year, when we saw the brewing tension between Hue Jackson and Todd Haley (both would be terminated midway through the season)?

Several seasons have had quarterback battles documented by Hard Knocks, like the Texans below.

Unfortunately, the Raiders season didn’t dabble in many moments like that, because almost all cameras were just either not allowed in most places these type of conversations were having or NFL Films was told they couldn’t use that footage.  This access issue became more pronounced as the season went on and we got virtually nothing all season, as the roster management process that has become the heart of the show was mostly ignored.

Hard Knocks typically focuses on a handful of players on the roster bubble and digs into their backstories. You root for certain players. You see them improve and make progress. You see the coaches discuss the tough decisions looming. And then the cuts happen, viewers get a front row seat to player’s dreams crushed (or in some cases, realized if making the roster necessitates a meeting).

In 2014, the #Falcons cut Ricardo Allen on Hard Knocks.

On Monday, they made him a top-15 paid safety in the league.

The fifth episode of Hard Knocks has typically been one of the best hours of television all year, which you can see in full episode of the 2010 Jets season below.

But the Raiders season was totally devoid of any of this drama. No roster discussions at all were shown. Instead, we were treated to three coaches at a meal discussing how cut day would be crazy, and this ten second scene below that consisted of Jon Gruden insightfully saying, “as I said a long time ago, a lot of players want to play here, man. And a lot of guys want to play for the Silver and Black.” The only interesting thing about this one crumb we were given is that NFL Films did indeed have cameras in the bigger coaches/front office meeting rooms, but it seems that NFL Films was unable to actually show any substantive conversations.

NFL Films (likely thanks to some arm twisting) was able to document one player being cut in Jason Cabinda. That conversation centered around how the Raiders were only keeping four linebackers and that he wasn’t enough of an asset on special teams, which has been a common theme for young players in earlier seasons.  Did we know Cabinda even played special teams? (no) Did we hear the coaches discuss his lack of value there and what other player might be a better fit? (no) Did we get to hear conversations about the lower number of linebackers the Raiders would keep, and what other position might get another roster spot instead? (no)

This year, fans of the show were flying blind. The only thing we got was a shitty one minute clip of a montage of Raiders players with Gruden saying that each one of them making the roster “would be a battle”.

The NFL thinks having Hard Knocks is good for the league and has committed to doing this every year. If a team doesn’t volunteer, which is usually the case, there is a pool of a teams that can be forced to do it. That really hasn’t been reported on much. How can you force a team to give all access for a TV show? It’s a whole song and dance we don’t see.

But what gets lost is the announcement of *when* Hard Knocks settles on a team. We’ve had announcements as early as March, with the majority of them taking place in April and bleeding over into May. This year’s announcement happened in early June, which puts quite a squeeze on pre-production.  In 2011, we didn’t get a season of Hard Knocks because of the lockout, with no team able to sign off in late July. The clock ran out, and this year we got as close to that cutoff date as we have in any other year since 2011.

The longer it takes for NFL Films to compel a team to participate, the higher the likelihood they are making concessions with that team over access and other areas of concern, and it appears that’s what ended up happening here. This year’s Hard Knocks had a lot of great drama and personalities injected to it, but it was destined to disappoint because the special sauce fans have become addicted to remained sealed shut in a jar locked away in a basement. We got ketchup packets from the back of a junk drawer instead.

There is not really anything that could have been done this year. NFL Films, HBO, and the NFL itself want Hard Knocks to be a consistent product, but that’s not a realistic expectation, especially when you have owners, coaches, and front office personalities who just won’t play ball. Let’s hope this year’s dud is as uniquely awful as Raiders’ owner Mark Davis’ haircut, and that next summer, Hard Knocks comes back with a vengeance.